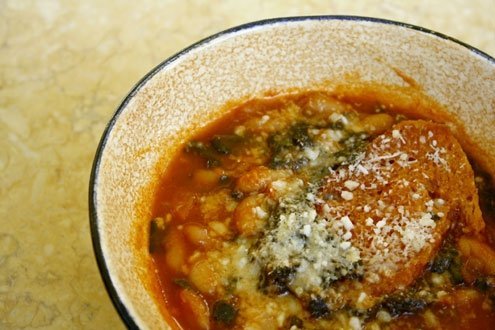 The "re-boiled's" balance of flavors is rich and thorough.
W

e all grew up with croutons in our soup and oyster crackers in our chowder. Those crisp little bits of bread in our bowls that added texture and bulk to an otherwise bland meal, that is, if you ate it quickly. Otherwise the bread disintegrated into wet crumbs, which are pretty unappetizing at any age.

I never cared for anything soggy, and would sooner eat the packets of croutons or oyster crackers on their own — they always brought them out before anything else and I would rip into them before my mother could warn me about ruining my appetite.

Later I would come to appreciate a good bowl of French onion soup, with the slab of chewy bread floating top that somehow managed to stay crisp on one side. Of course this was mostly thanks to the cheese and butter broiled on top of it.

The first time I had ribollita, I was admittedly skeptical. We’d stopped at a restaurant called Osteria dei Giusti just outside of Florence following a three-day Tuscan road trip during which we’d exhausted most of our euros on Chianti and unimpressive prix fixe menus designed for lazy gourmands like us. I didn’t always have a discernable palate. This restaurant, and specifically the ribollita, may actually have triggered it.

We had arrived on the late end of the lunch shift and our server grinned through gritted teeth when he read off the few dishes still available, among them the ribollita, also known as Tuscan bread soup. It starts with a thick vegetable soup, flavored with a black kale, or dinosaur kale, for its blackish-green veiny leaves and thick spine that give the leafy vegetable the look of something ancient, and only recently cultivated for human consumption. The recipe varies like any minestrone, which is effectively a tossing together of whatever is lying around about to go bad in the fridge, and can include cannellini beans, potato, carrots, and potatoes. But it is the kale, or cavolo nero, that gives the soup its distinctively sweet and bitter flavor.

Thyme is the presiding herb. In line with the waste-not-want-not theme of the dish, crusty, Tuscan bread, which turns rock hard after a few days, is added to the mix, where it soaks up the soup just slowly enough to regain something akin of its original texture, as opposed to a soggy, disintegrated mess. There is no right or wrong way to do it, but I believe that the perfect ribollita should contain discernable bits of still-chewy bread down to the last spoon full.

Our ribollita arrived bubbling in ceramic bowls with a warning from our server. He drizzled each of our dishes with just-pressed olive oil, and the thick green scent diffused in the steam. As it began to cool, the edges pulled away from the sides of the bowl. A sort of seal was forming. The soup had been reheated under the broiler, and the combination of bread, beans, and potato had formed a glutinous crust that cradled the olive oil in micro-pockets and burst under the pressure of a spoon, releasing an aroma so irresistible that we all burned our mouths. Repeatedly.

I’ve since tried many different versions of the soup. The base is always similar, but the addition of bread varies tremendously. Some restaurants place a piece of dry bread on top at the moment of service. Others, like Trattoria Fiaschetteria Mario , Florence’s premiere local spot (which has remained remarkably unspoiled despite its presence in nearly every guidebook on the planet), make cauldrons of the stuff and mix the bread in over hours until the soup turns a lighter color and takes on a thicker, pastier consistency. It isn’t attractive to look at, and vaguely resembles something regurgitated, but the balance of flavors is so rich and thorough, that if I weren’t so fussy about presentation I would make it this way.

Instead, I use a recipe I collected at the famous covered market in Florence during a recent trip back there. Oddly enough black kale is tough to track down in Rome. Over the eight years I lived there I kept my eye out for it at neighborhood market. Those rare times I found it, I would snatch it up like shoes at a Lord and Taylor sale. It was almost easier to buy it in Florence and bring it back on the train, which is exactly what I did, along with sacks of other vegetables and three different types of thyme, all purchased from a woman named Graziella in accordance with her own recipe. I still have the crumpled sheet of paper ripped from my notebook, with title: La Ribollita di Graziella scrawled across the top. It’s now stained with the drippy evidence of my every attempt to make it.

It all begins with a soffritto, basically a light stir-fry of carrots, celery, onion, and potato. For best results, use a large wide frying pan and chop everything uniformly. I add the thyme here as well to really infuse the soup with flavor from the beginning. The rest of the ingredients are added one at a time and over the course of a few hours. A solid ribollita should require half a day, but the soup lasts for days in the refrigerator, and even longer in the freezer.

As the name implies, ribollita (re-boiled), it’s meant to be leftover, reheated, and leftover again. If you don’t have access to real Tuscan bread, find the crustiest Italian loaf out there, slice it into pieces, and toast for a few minutes in the oven before adding it to the soup. I like to pour everything into a baking pan and broil until it bubbles and a light crust forms. If you let it cool, it almost comes out in slices.

I’m generous with the olive oil and let it run over all sides and drip into the shallow serving bowl. It takes a spiny Chianti or otherwise acid-packed red wine to accompany this dish and cut through the slick of the initial soffritto and the raw olive oil. Ribollita may be vegetable soup in essence, but calorie-wise it’s on par with a heaping plate of fettuccine al ragu. The red fruit and spice notes in Sangiovese (the principle grape in Chianti) compliment the bread and herbs in the soup in much the same way that cranberries and cinnamon match a sage-scented stuffing and all the trimmings at Thanksgiving.

I only make it about once a year, but when I do, the smell fills the house for days. Open a Chianti and invite over some friends. It isn’t Florence, or even Italy these days, but the flavor is undeniable, the coziness unbeatable, and yes, I still burn my mouth every time I take the first bite. It’s part of the charm.

— Finely chop the carrots, onion, celery, and potato and stir fry until lightly browned. Add the thyme. Stir in the tomato and cover with water.

— Shred or chop the kale and add to the soup. Cook for about an hour.

— Add the beans and more water. Salt and pepper to taste. Cook for another hour, until the kale is tender.

— Distribute in a baking pan and layer with bread (in slices or cubes). Bake until bubbling, and broil until the desired crust forms. Drizzle in olive oil.