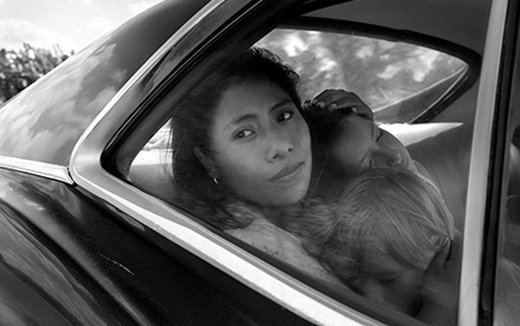 Housemaid and nanny Cleo (Yalitza Aparicio) is no longer a girl, but a woman who is in essence a mother to an upper-class family's four children in "Roma."
A

Except “Roma” isn’t that, not after the first half hour. Set in 1971, the year that Helen Reddy’s “I Am Woman” was an iconic hit, “Roma” morphs into a feminist tale, one whose message resembles the first lines of Reddy’s anthem: “Oh, yes I am wise/But it’s wisdom born of pain.”

When the pain arrives, it’s driven by nasty men (welcome to 1970s feminism). Cleo, a simple village girl, has become nanny, friend, and surrogate mother to the family’s four loving hellions. She naively embarks on a brief relationship with Fermín (Jorge Antonio Guerrero), a threatening fanatic who culminates a frontal-nudity martial arts demonstration by impregnating Cleo, then refusing all responsibility.

Set in 1971, the year Helen Reddy’s “I Am Woman” was an iconic hit, “Roma” morphs into a feminist tale, one whose message resembles the first lines of Reddy’s anthem: “Oh, yes I am wise/But it’s wisdom born of pain.”

Sofia’s problem is her love for her foppish husband, Antonio (Fernando Grediaga), first seen in a superb from-behind sequence threading his enormous sedan into the narrow garage as the maids and Sofia feign something like admiration. Antonio proves no more ethical than Fermín, freeing his wife from a sterile relationship and setting the stage for the female solidarity that grounds the film. When Sofia says to Cleo “we women are always alone,” we feel her isolation, but also sense their growing bond, as in “alone together.”

Beyond Cleo’s troubled pregnancy, the two women exist and interact in the context of a series of crises and natural disasters, including an earthquake, a mountain fire, a student protest that turns deadly, a near drowning of the children (as well as a loss of contact with them on the chaotic Mexico City streets). There’s little consequence to any of these events, which seem to exist to emphasize the fickle nature and insecurity of life itself, a reality that Sofia and Cleo experience as their men abandon them.

Something similar—a sense that life is not only unstable but even absurd—drives several scenes while evoking Federico Fellini’s films of the 1950s and 1960s, including “8-1/2” (1963) and “La Dolce Vita” (1960). In one scene, a guru-like mystic leads a field of men in the martial arts; in another, a costumed scarecrow-like man speaking no recognizable language pontificates while those around him fight a forest fire. And there’s the carnivalesque marching band that appears at intervals on the street where Sofia and Antonio reside—echoes of the traveling carnival in Fellini’s “La Strada” (1954). “Roma” also brings to mind the 2001 Argentine film, “La Ciénaga,” with its careless and non-caring elites, endangering the lives of their children.

Like its Italian precursors, “Roma” (the film is named for a Mexico City suburb in which the director was raised) is shot in black and white, helping to locate the events in the past. The black and white palette also reflects Italian neorealism; there are numerous close-ups, as in Vittorio De Sica’s “Bicycle Thieves” (1948). But unlike the Neorealists and more like Fellini, Director Alfonso Cuarón, who is his own cinematographer here, also uses stunning long shots—a barren barrio with a man being shot from a cannon, an enormous field of martial arts students, the children being swept out to sea — to depict a world in which human efficacy can, and often does, count for little.

To be sure, Sofia and Cleo are survivors; they have “wisdom born of pain.” Taking charge of her life, Sofia purchases a smaller car that will fit comfortably in the garage. And the two women come to understand that what they share — their love for the children, and their lives as women — is stronger than the forces of class and culture that divide them. But the world outside is, to say the least, formidable.

Besides the feminist tale, “Roma” is also a story of girlhood becoming womanhood. It’s even more Cleo’s story than the story of the two women. Cleo is portrayed in intense close-ups, while we see Sofia only from some distance. In addition to gender, the film ruminates throughout on class and family. The city maids are uppity, Cleo is told. Fermín, himself a village man, when rejecting Cleo, shouts that he could hardly be expected to marry “a servant.”

Director Cuarón deserves the award nominations he’s garnered for “Roma.” He’s in complete command of a layered story, of space — the Mexico City apartment is wonderfully complex—and of the camera. He even gives us a wink for his film “Gravity,” for which he won Best Director in 2013. The film the family goes to see is 1969’s “Marooned,” featuring three astronauts, lost in space.