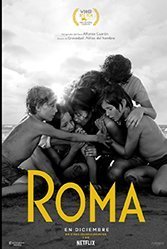 Mexican filmmaker Alfonso Cuarón shares quirky affinity with the late Chilean writer Roberto Bolaño. The Chilean novelist ventured far afield from his tortured homeland, to Barcelona and the written worlds of his own invention, but he was unable to curb returning to his adopted Mexico City. It was there that his stories acquired depth and heart. Cuarón, who began his career in 1980s Mexico City (he was born there in 1961), later spent time in Hollywood circles, leading to “Children of Men” (2006) and “Gravity” (2013). Yet he, too, couldn’t resist the lure of home, and his latest movie is proof.

“Roma,” set in the 1970s, is about a maid who works for a middle-class family (mother, father, grandmother, and four children, including three boys) teetering — though you wouldn’t know it at first — on the brink of inner and outer collapse. Like Bolaño, Cuarón is at home in this time in Mexican history, when the country, fresh from the Olympic massacres of 1968, teetered on the brink of South American authoritarianism. Roma is not a reference to the Italian city, but rather the name of a gated neighborhood in the Mexican capital. Cleo (Yalitza Aparicio) is the do-it-all servant who ensures proper functioning of the household that employs her, all the while sharing gossip with other maids in nearby homes. She is the film’s core character and provides its vantage point. She’s also clearly Cuarón’s means of transit into his own past. The details are told lovingly, and taken together, create a thriving landscape. There are the nooks and crannies of the home, its gardens, a dog named Borras, and Cleo’s friend Adela (Nancy García), the family cook (both women are from Oaxaca and often speak that southern state’s dialect).

All this might seem idyllic, a pure tribute to nostalgia, until fissures appear. The father’s business cracks, and he bolts. The earth itself cracks, sowing terror. Grandmother Señora Teresa (Verónica García) looks on with Cleo as students clash with police. Cuarón plays with history to suit his narrative needs — the protests and subsequent Corpus Christi massacre occurred in 1968, the massive Mexico City earthquake in 1985. The point, however, is that chaos is undeterred by gates. Cuarón uses black and white as a means to wade more fully into Cleo’s life, using documentary tones.

Tacitly, this is biography filtered through fiction. Though father (Fernando Grediaga) and mother (Marina De Tavira) are present in tableau, humble Cleo is the master of ceremonies. She is the soul of one man’s imagined past.

“Roma,” which Cuarón also wrote and edited, doesn’t come with a bottled message. If Bolaño made Mexico City home, for Cuarón, it was home, and he tells of it in an effort that honors heart and mind.