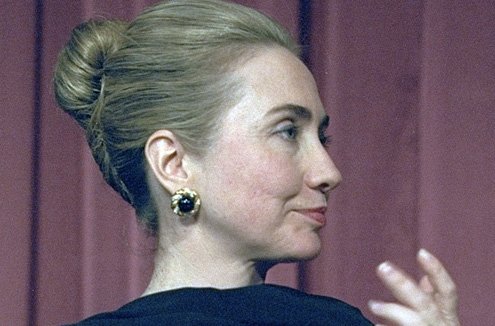 o ahead. Tell me you saw it coming. It was 1995 and you were busy tinkering with your phone modem and IBM ThinkPad while patting yourself on the back for your latest performance raise — 10 grand that year — when someone asked you what you thought the American presidential landscape might look like in 20 years. That’s when you took the conversation from the office to the happy hour bar (hey, why not spend $10 on peanuts?) and you confidently told your best buddy the following:

After the double-take, in which your friend reminded you Bill Clinton hadn’t even served a second term and daddy Bush had just finished up failing to be re-elected, you explained how all this came to pass (which you saw in a sweat-inducing dream, of course).

“See, this is how it goes down. Clinton gets re-elected but then has one too many Oval Office blow jobs, and gets caught and nearly booted. Hilary, meanwhile, looks tough and stalwart, a woman’s woman….

“Then, Bush’s older son, the governor of Texas, gets involved with things thanks to resurgence of the right, and the fact that Al Gore can no longer count on sexy Bill’s support because it’s tainted…

“Okay, so, they have an election, Bush-Gore, but it ends up being a dead heat, with Florida in the balance, that’s little Bush’s state — he’s now the governor — and they have to recount all the votes which takes a couple of months and a bunch of law suits, with the Supreme Court even getting involved…”

Interruption here, with your friend saying: “What are you taking?”

“Stay with me. Once they count all the votes again, some of which are marred, they decide Bush won, which makes Gore think twice about whether he should have been nicer to blow job Bill…

“Then, about a year into Bush’s term — call it around Labor Day — a bunch of suicidal Islamic loonies fly two hijacked commercial jets into the Twin Towers, which both collapse in flames — on film… They also crash another one into the Pentagon, getting the military mad…”

By this time, the drink is Vodka.

“This leads to the invasion of Afghanistan and a war against Iraq, which just about everyone thinks is very cool, including Hillary, who’s anteing up her macho quotient to take disgraced Bill’s place as the Democratic Party honcho — since Al’s long gone. You with me?”

“So, Hillary begins to look like the face of the Democrats, or one of the faces, so much so that by 2005 — after Bush’s been reelected — she looks like a logical contender.

“Then, in 2008, after everyone’s gotten tired of wars that aren’t working and older son Bush has run out of terms, Hillary pounces, except that she finds herself up against a black congressmen from Chicago whose first name might have been Barry but turned out to be Barack. This guy captures everybody’s imagination as the ‘change’ guy. Everyone likes him except those people who think he’s really a planted Islamic loony. But, he wins, twice… and even makes Hillary his secretary of state…

“By then, Hillary and Jeb are in their 60s, which might seem over the hill, since Bill and Barack were young when they were elected, but Hillary’s louder and more ambitious than ever and Jeb Bush speaks Spanish, which helps.”

At this point your friend reminded you happy hour was just about over. He also told you your dream was more of a nightmare. You realized you were a little buzzed, so you gulped down a $8 bottle of imported water before fishing around for your BMW keys and heading home to tell your soon-to-be wife that the all-Business Class, all the time 1990s would probably end up being best decade ever. No need to wait around for 2016.