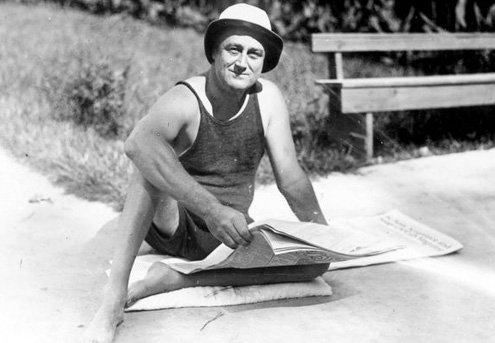 Roosevelt in 1924, his legs withered by polio.
O

n April 12, 1945, the European war was entering its bloody final stage. The Soviet army had reached the suburbs of Berlin and was advancing toward the Reich Chancellery — where Adolph Hitler was indulging his final and moronically operatic obsessions — when the death of Franklin Delano Roosevelt was announced.

The subsequent collapse of the Axis powers was rapid. On April 25, Italian partisans shot Mussolini and five days later Hitler committed suicide. Germany’s unconditional surrender was signed on May 7. Japan collapsed and surrendered in August 1945.

Despite the enormous changes the world has undergone in the last 70 years, Roosevelt’s legacy still constitutes the basis of the world order we know today. Roosevelt’s goals of freedoms from want, hunger, and political repression became the basis of the postwar welfare state. European colonialism came to an end. If a single man can be said responsible for these events, it would be Franklin Delano Roosevelt.

Roosevelt served four terms (later constitutionally limited to two) and led the U.S. through the Depression and recovery. He oversaw America’s victory in the longest and deadliest war in history, with over 70 million people dead, among them 40 million civilians who perished in concentration camps, direct slaughter, bombings and starvation.

In the summer of 1945, much of the world was in shambles. Only the U.S., spared the direct impact of war, was economically buoyant, entertaining the fastest period of economic growth in its history. That was largely due to the successful economic policies the Roosevelt administration had adopted during the New Deal and in wartime. In the four years between 1941 and 1945 U.S. GDP doubled, accounting for over 40 percent of the world’s economic capacity.

The Axis powers, the Allies had agreed, would have to surrender unconditionally. The question of unconditional surrender had emerged before, in the final days of World War I. In 1918, the American commander in Europe, Gen. John J. Pershing, had wanted to push through Germany and conquer Berlin. His European Allies stopped him and an armistice was signed.

Roosevelt and other members of his administration had taken part in the Versailles Peace Conference in 1919. They returned shocked at what they saw as Europe’s imperialist greed, rightly convinced a new war would break out in the not too distant future.

In 1945, the Allied decision to impose unconditional surrender on Germany was based on the American determination to prevent a repeat of the revanchist myths that had stoked Hitler’s ascent to power in the decade after 1918. As early as 1942, the U.S. had decided that the Axis powers must be permanently brought to heel. The following year, when American Gen. Maxwell Taylor visited Pope Pius XII in Rome, he brought a message from Roosevelt that stunned and frightened the pope. The Americans had no intention of negotiating a treaty to end the war but would push through for Germany’s unconditional surrender.

It came as a terrible shock to conservatives across Europe when the pope let it be known that the Americans did not intend to follow the usual European practice of waging war and then signing a treaty among enemies. They had expected to conduct business as usual. They hadn’t grasped that the nature of this war had changed the rules forever.

The Axis had essentially lost the war after the battles of El Alamein and Stalingrad, though the battles dragged on for months. Hitler, whose grasp on reality seems to have been slight, tried unsuccessfully to regain some strategic initiative, but it was only the German army’s brilliant tactical skills that kept the war going — though with no hope of changing the final outcome.

Imposing unconditional surrender on Germany and Japan ensured that militarism was dead and buried there. And postwar changes in the social structure of the defeated countries have prevented the resurgence of the past’s unthinking aggressive nationalism. It is no mean achievement.

Overall, Roosevelt’s logic and guidelines have withstood the test of time. The creation of the United Nations and all its agencies, the end of the European colonial empires, the transformation of Europe into a sort of federal structure — a long and very complex process-all these had their roots in the policies originated by Roosevelt and his insiders. Even the relatively peaceful demise of the Soviet Bloc and the end of the Cold War can be attributed to the framework Roosevelt envisioned for Europe.

Today, the issues have changed. Some of us were born when the British and the French empires were still vital concerns. This writer was even called up to serve in Algeria during its war of independence against France. But most of the world has no memory of all this.

The relative position of the U.S. has declined sharply: it now accounts for around 10-to-12 percent of the world GDP. New economic powers have arisen, in particular China, India and Brazil. Ours has become a world with many actors and no hegemonic power.

Even Roosevelt is now a man of the past, and his legacy has largely been forgotten. But the problems that must be faced in the future will require a Rooseveltian vision.