The word of Guido 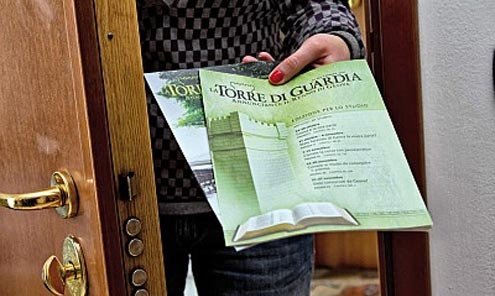 In front of me were two Italian women carrying a Bible and small pamphlet.
I

t’s three weeks into my three-month stay in Spoleto and on a good day I can almost say hello to a passing stranger and count from one to 10 to anyone willing to listen. My grocery store is an easy hike away, and though I still can’t read package labels, vino rosso, formaggio and pane are all completely familiar.

My apartment is perfect. It’s safe and accessible for a single woman. Sure, I wouldn’t mind being closer to my fabulous fantasy lover-boy Fabio, but since I haven’t found him yet I just pretend he lives next door.

As I was putting my groceries away the other day, the doorbell rang. Living in a gated building I just assumed it was a neighbor, or at least nothing unsettling. I was wrong.

In front of me were two Italian women carrying a Bible and a small pamphlet. Of course! They were… “Jehoviano Witnessasario”! (Which I decided was the appropriate Italian translation).

I actually laughed out loud (in Italian of course). Not out of disrespect, but because for some reason the scene seemed like something out of sitcom. Did Jehovah not get the memo that this is papal country (never mind that the pope is resigning)? It reminded me of a Catholic friend who recently pushed away a rosary salesman near St. Peter’s Square, claiming to be Jewish. It didn’t work. “So am I,” beamed the peddler. Everything blurs over here.

The two “Jehovianos” — Testimone di Geova, if you want to get technical — began their spiel (in Italian), which I’d heard so many times in English I could deliver it myself. First with hand signals and then by shaking my head I began convincing them I didn’t understand a word they were saying.

That only triggered show time. They held their pamphlet as close to my face as possible and pointed to it.

I am now fluent enough to bray back with my trump card: “No capisco.” My Italian teacher would be proud.

So there they stood, determined to force-feed me the Word of God (Guido?). Maybe by some divine intervention I was expected to start speaking in tongues — maybe not Italian tongues but some tongue that suggested I was being saved. To further confuse matters, I fired back in English and even threw in a few words in Turkish (my previous vacation destination).

Frustrated, they began talking to one another, clearly working on how to overcome this language issue. They then asked how long I would be in Spoleto. I’ve been down this slippery slope with the Witnessario before and knew that if you give them an inch they’re in for a million kilometers. Give them a clue I was here for three months and I could expect to have them present at the airport for my departure, peering into the window pamphlets in hand.

I held up seven fingers.

Why is it the pope never comes to the door selling his wares (maybe he will now)? Or Billy Graham? Or Tammy Fay Baker? Or even the Devil himself for that matter.

Still, I’m rethinking my religion. There must be something to Jehovah’s Witnesses if they were actually able to get past the locked gate and into the building. (Actually, they represent the country’s second largest religion after the pope’s people, at least among Italian citizens).

When they come back next week, which I’m sure they will, I’ve decided to put them to a test. If they can turn my umbrella into a snake I’m in.