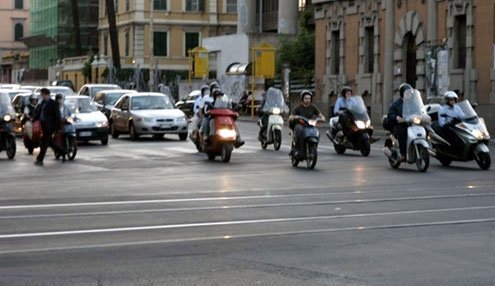 ust about everyone who has ever been to Italy is shocked by, or at least notices, the way Italians drive. Driving stories are older than guidebooks. Cliché portrays Italian motorists as out-of-control, hot-blooded Latins threatening the lives of innocents. Let’s face it: they never use turn signals, tailgate like crazy, and flash their headlights when you get in their way.

While I respect the foreign perspective, writing them off Italian drivers as nuts is the easy way out. Maybe I’m just as crazy as they are, but I feel compelled to put their habits in perspective.

Unlike everyone else, I actually feel safe in cars driven by Italians. The boxy snugness makes me feels like I’m in a security bubble.

Italian drivers are remarkably predictable. They’re all trying to go as fast possible. Everyone’s on one nutty wavelength, following a code of chaos. It’s ironic that Italians, who have one of the most carefree approaches to life, are so addicted to speed.

But at least the driving game has a clear outline. American drivers constantly make me wonder what’s next. “What on Earth are you trying to do?” I ask myself. The Italians are simpler: You need to assume they’ll speed up and stick close together like pack animals.

True or not, driving a stick is more demanding. Automatic transmission is a recipe for constant distraction. Americans can eat and talk. Some chip cans are fitted into car cup holders. Forget that with a stick.

Italians are skilled and hyperaware. They can’t risk too many distractions. They focus on what’s happening in front and to the side. A Dutchman once told me, “I just go forward and never look back.”

Communication is more regular and personal. Case in point. Motorist honks at a motorino in front of him. The motorino driver, bothered, turns around and raises his hand. The unspoken message: “O, ma che stai a fa’?” The chitchat is constant.

Americans by contrast are often bland and timid. Restraint and tentativeness introduce their own problems. Reflexes get dulled. Sometimes speeding up and tailgating are vital to avoiding an accident.

Look at merging. I’m always amazed and infuriated by the way American drivers pause on highway onramps, checking their side-view mirrors as if waiting for an engraved invitation to join the speeding herd. :Just go for the love of God!” I find myself yelling. I’d rather you zoom ahead of me and speed off into the distance than chill out ambiguously.

But experience teaches me better than to fully trust Italians. Crossing a street in Perugia, kid on a motorino ran into me. He just didn’t stop in time, catching my leg and landing on my foot; no serious harm. Strangling him was out of the question. He wore a casco integrale. I got a gelato instead.

I’m not defending speeding and I’m not denying that Italy has its share of awful accidents.

I’m just pointing out that beneath the time-honored chestnut about insane Italian drivers are a set of unpublished rules that in many ways are clearer and more instinctively smart than those in the United States.

Pedestrians may not look at it in quite the same way, but the unwritten pedestrian code is for another story.