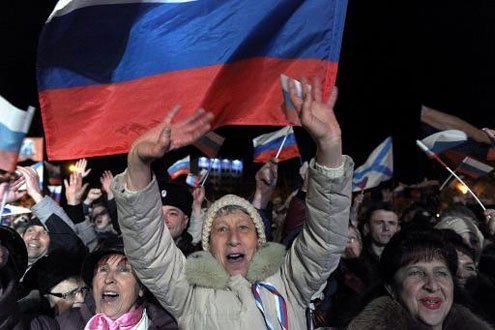 A new step for Crimea, and Russia, and one that places Ukraine in jeopardy.
O

n March 16, Crimea effectively substituted the yellow and blue flag of the Ukrainian Republic with the red, white and blue of the Russian Federation (a flag adopted by Peter the Great, and copied from the Dutch). The Autonomous Republic of Crimea will be absorbed by Russia with the overwhelming support of its people, though the process itself will likely demand time and complex diplomatic negotiations. It could be the first step toward a semi-partition of Ukraine that would in some ways recall Poland’s 18th-century partitioning among Prussia, Austria and Russia.

Thought the results of the breakaway referendum were an unquestionable triumph for pro-Russian Crimea, they may also foretell similar problems in the eastern provinces of the unhappy Ukraine, where a majority of the population is of Russian origin and whose coal-dependent heavy industries are deeply integrated with the Russian economic system. At present Russia is Ukraine’s most important market and absorbs 35 percent of its exports.

The problems emerged time and again in violent political upheavals over the last decade, and in the country’s dramatic economic failure. Ukraine’s GNP is calculated around $185 billion (with a very wide margin of error), a figure that has hardly grown since independence. As economic and ethnic divisions within the country have increased, its only remaining point of strength was as a transit system for Russian oil and natural gas exports toward the West. Oil and gas supplied by Russia account for roughly a third of European consumption.

A few years ago Gazprom, the main Russian natural gas producer, took over partial control of the pipeline system and imposed an international pricing structure for its products. In exchange, the Russians loaned their Ukrainian neighbor several billion dollars to support fuel purchases.

As a result, there have been no interruptions of gas and oil flows to the West in recent years. The Ukraine was forced to cut the high transit tariffs it had been imposing, which were absorbing nearly half the value of the natural gas transported and were deeply resented by Russians exporters. Since the late 1990s, Russia had also begun defining and building alternate routes for hydrocarbon trade with the West. Most Russian oil now flows to the north through new pipelines and terminals directed toward the Gulf of Finland and the St. Petersburg region.

Transport of natural gas is more complicated. The first completed project was the Blue Stream pipeline, which crosses the Black Sea and connects Russia with Turkey. A new trans-Baltic pipeline is now at an advanced stage of construction and will connect northern Europe to Russia by 2016. A similar project is under study to connect Bulgaria and Greece to Italy across the Adriatic. By 2020 Ukraine will have been largely bypassed.

Ukraine-Russian relations have been tense since independence in 1991, mostly as a result of Crimea, where the Russian fleet has its main Black Sea naval bases and possesses some extra-territorial rights similar to those enjoyed by Britain in Cyprus. But the tensions were enhanced by Ukraine’s control over all important natural gas and oil exports, and because of the sizeable Russian minority in southern and eastern Ukraine. Now some of these economic and ethnic “chickens” have come home to roost, and may need year of negotiations to resolve.

In many ways Ukraine is close to a failed state. It has immense organizational problems and has struggled to handle an array if complex and divisive issues. Economically, it is over-dependent on the service sector, which accounts for 60 percent of GDP but is largely antiquated. At the same time, its agricultural sector has the potential to be Russia’s granary, as it was over a century ago, and Europe’s as well – if only it weren’t still reeling from Stalinist-era policies that work against peasantry and have blighted its agrarian prospects.

Ukraine also has a huge external debt, estimated at well over $220 billion, much of which is owed to Russia. Its foreign currency reserves amount to roughly $10 billion, insufficient to cover the country’s requirements. Theoretically its oligarchs and mafias have safely stashed away large sums in foreign havens, but it seems unlikely the state will have access to those resources to cope with the emergency likely to arise in the near future.

Decades ago, British writer Graham Greene wrote that Russia would be “saved” by its secret services, and Vladimir Putin’s career and his policies are an eerie confirmation of that prophecy. Nominated by then-Prime Minister Yevgeny Primakov, a former head of the KGB, Putin spent time in East Berlin as an intelligence station chief. Since his rise to power in 2000, he has worked to block the centrifugal forces set in motion by President Boris Yeltsin in the chaotic 1990s, which were a disaster for Russia. Putin has reaffirmed the centrality of the state and arrested the regional forces that at one point risked breaking the country apart. This centralizing process seems to have extended into peripheral areas of the new states created by the dissolution of the Soviet Union.

Moscow’s heavy hand is present in the Georgian republic, where pro-Russian regions have been established by force as “autonomous republics” obliged to carry out policies in concert with the Kremlin. To a certain extent, the same process has been at work in Kazakhstan, and is now evident in Ukraine.

The prospect of Western sanctions doesn’t overly worry Russia, which is cushioned by abundant currency reserves and is therefore practically invulnerable to a short-term boycott. Above and beyond that, Russia’s basic industries, such as steel and nickel, as well as its abundant natural resources (oil and gas but also gold, silver, copper, and the list goes on) give it a substantial leverage. Most European countries, beginning with Germany and Italy, but also others, are so inter-dependent that a sharp break with Russia would be difficult if not impossible. Countries such as China and India also have a strong interest in maintaining good relations with Russia in hopes of obtaining further supplies of raw materials. Moreover, they don’t identify with Ukraine’s demands.

What “new order” is likely to emerge from recent events is difficult to predict. Certainly, more sophisticated diplomatic strategies are urgently needed — boycotts are insufficient — or the situation may spin out of control. One immediate issue will be to help Ukraine try to avoid bankruptcy, a task that will make the Greek bailout look like child’s play.