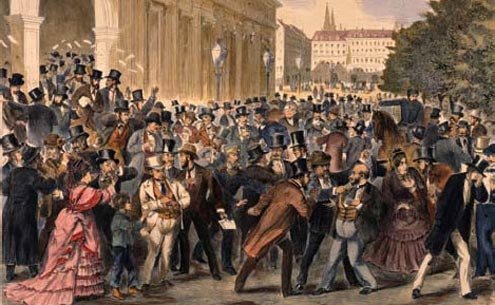 Black Friday on the Vienna Stock Exchange in May 1873.
I

n the great debate about our present economic crisis, the Great Depression of the 1930s is the most commonly applied precedent. The cure applied so far has focused on cutting the costs of the welfare state and reducing the level of public debt in hopes of creating conditions favorable to cutting taxes by raising disposable income to ensure future growth.

So goes the refrain, at least.

But the more governments cut their expenditures, the more economies shrink, and the perverse cycle starts again. Apart from the partial exceptions of the United States and Canada, most of the West has regressed by about a decade, and more seems to be on the way. To paraphrase John Maynard Keynes, but only slightly, “in the long run we may all be dead.”

Perhaps the time has come to consider another historical analogy. In many ways the ongoing crisis has more in common with an earlier great depression, known to some as the Long Depression, that afflicted the industrialized economies of the period (Great Britain, Belgium, France and to a certain extent northeast U.S.) in the final quarter of the 19th-century.

What led to their emergence? The reasons were both political and structural, including a continuous fall in raw material prices and the energy revolution that led to the end of the coal monopoly enjoyed by Britain and Belgium. Countries such as Italy, Switzerland and Bohemia began their own wave of industrialization by using hydropower from their mountain ranges to develop textile industries and produce the electricity required by their new industries and cities. The growing use of crude oil also reduced cost differences between more developed countries and the newcomers.

This was also the period when governments, starting with Germany, began experimenting with social reforms that were the embryo of today’s welfare state

This earlier great depression opened the scramble for African territories and the attempts, only partially successful, at partitioning Asia, as the mature economies sought outlets for their heavy industries (such as steel), sources of raw materials, and markets for consumer goods.

The 19th-century downturn also saw the advent of new technologies that would lead to creation of the chemical industry, the electrical industry, the oil industry, to a rapid growth in manufacturing and new consumer goods like automobiles (all those sectors that would eventually be the basis of subsequent economic growth). The process came with a sharp fall in the standard of living in most countries and witnessed severe agrarian poverty.

Only around the end of the 1890s did incomes begin to rise again. But social tensions had become unmanageable, wars loomed, and violent regime change, such as that which would take place in Russia, was already on the horizon.

The gradual, widespread introduction of the welfare state eventually reduced the social and income differences that marked the period. Memories of the “Other Great Depression” have faded, and its lessons lost in time.

But the similarities with what’s happening today deserve closer attention. Western manufacturing dominance is coming to an end. New industrial powers are rapidly advancing, foremost among them China, India, Indonesia, and Brazil. Those countries and others in Asia, Africa and the Americas are destined to become the manufacturing powers of the future. Although they are now very competitive, because labor is abundant and wages low, the situation won’t last. Their economies will change radically as their domestic markets develop and they begin to control more mature manufacturing products, both capital and consumer goods.

The West no longer prevails technologically in the mature sectors of the economy. Engineering companies in India can design and build both sophisticated refineries and chemical and power plants. They are becoming the world’s producers of electronic goods and cars.

Western economies will have to adjust to these epochal changes and accept a different global pecking order. In the near future, we will very likely see our last three decades as the final stage of a cycle of glowing prosperity and wellbeing.

The consequences of the “Other Great Depression” were by no means all positive. They included the growth of political extremism, nationalism and conflict, with a very destructive impact on societies. That’s probably the most important lesson to be learned from the period, one we ignore at our own peril.

Our present recession is already seven years old. We need to move away from doctrinaire and simplified cures if we want to escape the pitfalls that past experience warns against. We need less pessimism, less financial orthodoxy, and infinitely more inventiveness.