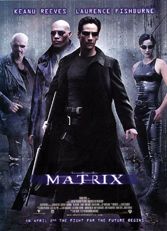 When Morpheus discovers he’s someone else’s software, he turns to savior Nemo. Who wouldn’t? Cool-named Fishburne and Keanu get a boost from low-boil cat woman Trinity (Carrie-Anne sure can fight). Keanu keeps telling Larry that he’s not The One, and Larry shows he’s pissed by dropping his voice an octave. Bad guy Hugo appears and he’s really, really mean. Also, the Oracle bakes great cookies. Much light, less magic. All in a theme-park day for the Bros. Wachowski. Just don’t tell me this made you see God.