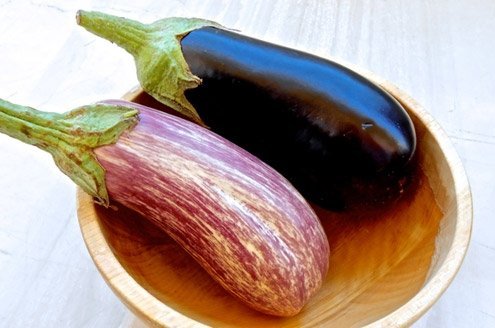 The Greek love affair with the eggplant is age-old.
E

very year, I meet up with a group of my oldest girlfriends and we escape someplace. The idea is to spend a week away from work, family, stress, and — at least in my case — the web.

Social suicide? No, it’s the opposite: total mind peace.

Though we couldn’t be more different as a group, our friendship has stood the test of time. Think of “Sex and the City” but with a Mediterranean twist.

This year we decided to celebrate our millionth year of camaraderie with a trip to, of all places, the Mediterranean, specifically the Aegean Sea.

The result was an August boat trip that took us to some of the most characteristic and charismatic Greek islands, including Rhodes and Lindos (both on Rhodes), the harbor town of Symi (and Kalo Chorio, its adjacent upper village), and the barely reachable Dodecanese island town of Chalki, or Halki. Best of all, we spent three whole days anchored in a bay of a tiny island — Alimia — that has had no fixed residents since World War II (unless you count resident goats and local Greeks, who visit it annually on April 23 to celebrate St. George Day).

My friends were a bit more concerned about keeping in touch, and many of them gave into Gen Y genes despite roaming charges and assorted costs. Not me. I shut down everything. I wanted to focus on a four-letter word: food.

If you love it as much as I do, try sitting around a table covered with traditional Greek delicacies. After you’re finished, do tell me if you’d rather be updating your Facebook or dispatching Instagram photos (I’d give you a break if they were food related).

Greeks have always had a love affair with eggplant, or aubergine (melitzana in Greek). We love them in Italy too, but the Greeks take their preparation techniques to another level. They fry, boil, braise, puree, bake, stuff, stew, and grill, even going as far to preserve eggplants as sweets. Legend has it that eggplant could cause madness. Its Italian name, melanzana was a corruption of mela insane, “mad apple,” which made it into early English as “melongene.” Almost needless to say, I ate more eggplant in eight days than I do in six months.

Eggplant revelry led me back to an old family recipe, a staple on my nonna‘s menu and among my family’s favorites. Admittedly, we never had our eggplant on Aegean yacht, but eating something good can sometimes be a vacation unto itself.

— Start with the tomato sauce. Put olive oil and garlic into a frying pan and cook the garlic until slightly golden to flavor the oil.

— Pour the tomatoes into the pan and leave it to thicken for about 20 minutes on medium heat. Salt to taste.

— Meantime, cut the eggplants into small cubes. Add these to a second frying pan coated in olive oil, together with few leaves of basil, letting the eggplant soften. Salt to taste.

— Once both are ready, turn down the heat and pour the tomato sauce into the eggplants. Add the chopped mozzarella and let it melt into the mixture until stringy.

— Turn off the burners and add the eggs. Mix well and finally add the breadcrumbs. (Necessary to achieve thickness. The finished mixture should not be runny.)

— Tightly pack the finished mixture into an oven dish. Sprinkle more breadcrumbs on top and add a few bits of mozzarella, which should give you a beautiful crust on the top of the finished dish.

Bake for about 30 minutes, or until golden on top.