The costs of war 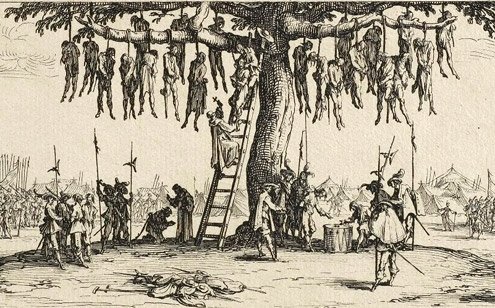 La Pendaison, "The Hanging," by Jacques Callot: The 17th-century Thirty Years' War, involving most of Europe, cost millions of lives and left Spain bankrupt.
B

ased on President Barack Obama’s latest remarks, there is now a glimmer of hope the United States will back down from its pledge to punish the Syrian regime for alleged gas attacks. Perhaps diplomacy will spare us all what would be a destructive blow on a Middle Eastern country already torn by ferocious and bloody civil war. A war, in fact, that is only part of a growing religious conflict between Muslim Sunnis and Shiites, a conflict that has parallels in other regional country’s including Iran, Saudi Arabia, the Gulf States, Turkey, and above all Egypt.

One mistake in this complicated chess game and the whole region could blow up. And the consequences would be disastrous for everyone. Global repercussions would certainly include rising energy costs. Though OPEC’s role has shrunk substantially over the last 30 years, oil producing states still supply about 35 percent of the world’s oil.

We’ve been there before. History is a good teacher.

The Thirty Years’ War almost destroyed Europe in the 16th-century, as did the Napoleonic Wars of the early 1800s. The human cost was by itself horrendous (more than 15 million dead), but the price went well beyond that. War is very, very expensive. No single state, not even a superpower, can afford it without suffering grave financial and economic consequences.

Consider the recent conflicts in Iraq and Afghanistan. Both were relatively minor in historical terms, though they’ve had dire consequences for the countries involved. Governments typically and grossly underestimate the cost of their military ventures. At the time of the Iraq invasion, the U.S. government set the cost at about $60 billion, estimating that an additional $30-to-$40 billion would be needed to rebuild damaged Iraqi infrastructures. The costs of the Afghani expedition were set far lower. Like revelers who calculate their bar tabs based on sipping Coke when instead they’re drinking fine Champagne, the final bill was far higher.

Iraq and Afghanistan have so far cost over $1.5 trillion, and the sum will probably rise to $1.8 trillion by the time the conflicts are expected to wind down in 2014. That is 18 times what the Bush Administration initially forecast. According to a recent Harvard study, further costs – including veterans’ benefits and medical assistance — will bring that number to $3.5 trillion. Nobel Prize-winning economist Joseph Stiglitz and some others had produced estimates close to the real costs in 2004, but their calculations were disregarded. Western casualties in what was originally considered little more than a punitive, post 9/11 expedition have so far come to 8,000 dead, including 6,500 American soldiers. Several thousand more have been seriously injured.

The former Soviet Union made the same mistake in the 1970s and early 1980s when it intervened heavily in the Afghan civil war, finally invading the country. Soviet casualties eventually proved politically unacceptable. But it was the enormous cost of the expedition, though kept secret, that sped up the USSR’s downfall and fracturing in 1991.

Britain had gone in the same direction in 19th and early 20th century when it launched disastrous military campaigns against Afghanistan and Iraq, culminating in British withdrawal from the region. One can’t help but wonder why then-Prime Minister Tony Blair, given humiliating experiences accumulated by his country, didn’t work to advise his American counterpart to stay out.

Historical precedents about the ties between war and finances are damning time and again. The Thirty Years’ War, which in fact lasted four decades (1618-1648), ended with the complete financial, political and military of the superpower of the day, Spain. France’s intervention in support of the American Revolution may have helped birth the United States, but in domestic terms may have been the straw that broke the camel’s back. A few years later came a colossal financial crisis that brought on the French Revolution and the collapse of the monarchy.

Lessons to be learned? Governments continue to recklessly undertake military adventures while vastly underestimating their overall costs. They hide behind pledges not to raise taxes in a quest for popular consensus. The truth is that war is now unaffordable. Other means for solving conflicts will have to be found, and in the case of Syria, moving toward diplomacy is a good if still uncertain sign.