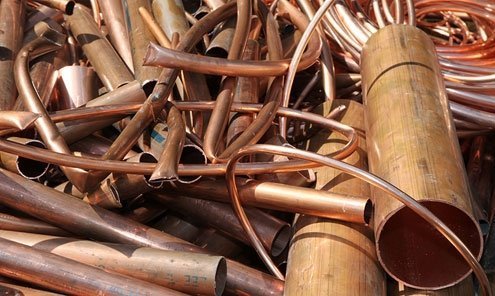 Since the start of the century, copper has been a hot target for thieves.
C

opper theft is on the rise, in Europe and elsewhere. Power lines are cut to remove valuable copper wire. Trains are annoyingly halted as a result. Thieves are sometimes tragically killed while meddling with live cables. Domestic piping, long made of copper, is stripped from older homes (copper-colored plastics have been substituted in more modern ones). In cities, copper hunters forage through garbage dumps seeking the copper found inside discarded electronic equipment. Almost daily, police stop a car somewhere and by chance find a few kilos of stolen copper in the trunk. In the U.S, the FBI had labeled such theft as “a threat to critical infrastructure.”

The surge is part of a much larger pattern in the commodity cycle. The past few years have witnessed a consistent rise in the cost of energy, metals and basic foodstuffs. Between 2000 and 2014 commodity price indexes rose fourfold. In industrialized countries, that means a far larger share of disposable income was spent acquiring these basic items – up from an average of eight percent to about 18 percent since 2000. The impact has been different based on income levels: marginal for the affluent; often disastrous for those in lower income brackets.

Curiously, few have commented on the trend. In the early 1970s, the price of grain, oil and metal suddenly rose threefold. The result was widespread public discussion followed by specific measures to counteract diminishing disposable income.

This time around, however, commodity costs rarely come up in either public or private economic debates. Governments and analysts seem blind to the trend, apparently convinced that only the free market should dictate the way resources are allocated. Banks and monetary officials, sharing the same viewpoint, have taken a hands-off approach.

That wasn’t the case in the 1970s, when governments tried, not always successfully, to offset the impact of price hikes by protecting poorer citizens. Such efforts naturally meant incurring larger deficits. Since then, “deficit” has become the dirtiest of economic words.

That said, the end of the commodity cycle’s upward swing might now be in sight. Over the past two years, prices have dropped by about 15 percent, and the trend seems to be accelerating. With a slowdown in China and India looming, decreased demand may finally push prices down.

The 15-year rise in commodity prices was only partly the result of classic supply and demand forces. The arrival of new economic powers such as China, India and Brazil was a boost, but their presence alone doesn’t explain why the peaks reached were so high.

Instead, the main actors in the commodity boom were not nations but financial institutions.

Unchecked by monetary authorities and awash in short-term funds, banks have become sophisticated players in commodities trading, taking the place of traditional brokers. Banks and ad hoc financial corporations acting on their behalf now own most marketed commodities, which they buy and sell extremely rapidly, with seemingly little or no risk. For example, an oil shipment can change ownership several times from the moment it leaves the field to its final destination. Some $500 billion worth of oil is traded this way each year in Europe alone.

This kind of explosive spending and turnover has all too much in common with the European real estate market boom, an unpleasant harbinger of deeper economic distress (think of Spain). Who will be left holding the lit match if, as statistics suggest, price trends are now headed into reverse?

In the short term, drops in commodity prices may well increase economic purchasing power and stimulate stagnant consumer demand. We’ll only know in about two years, which is the time it takes for such a scenario to play out.

It’s worth noting that the upward cycle has also borne some useful fruit, including technological advances in energy use. The introduction of fuel efficient and hybrid cars has sharply curtailed gasoline demand. Electricity consumption is also down and LED technology will reduce it further. Renewable energy — solar, wind, tidal — now accounts for about 15 percent of all electricity produced. That figure could reach around 40 percent in the next decade.

Two decades ago you couldn’t find the financing necessary to open a copper mine. Today, such mines are opening throughout the world, for which the thieves are probably thankful.