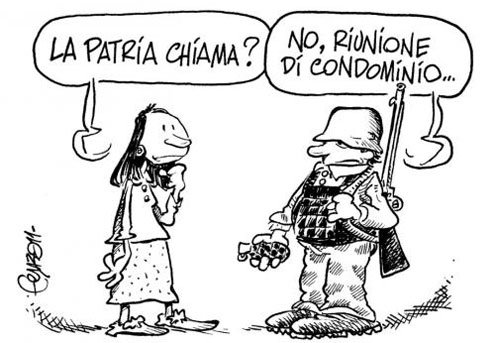 The riunione condominale has been lampooned for decades.
I

managed to avoid one for 41 years. And no, I’m not talking about a communicable disease, an awful exam or provolone piccante (which I can’t stand). I mean the most dreaded, awful and often completely useless of Rome institutions: the condominium meeting.

Having always lived in a family-owned home or a building with few residents (both before and after my marriage), most everything that mattered was handled in-house or over a chat at the local coffee bar.

That changed exactly eight years ago when my wife and I bought a garden apartment in Rome’s Ostiense neighborhood. We did our best to get around it, but I finally gave in.

Owning an apartment in Italy comes with attending condo meetings. “Endure” may be a better word. Condo meetings can feel like a tornado waiting to happen — except there’s no one around to forecast it.

You live with the menace until one day your mailbox contains a telling envelope and your stomach drops out. It has your name on it, usually handwritten, and a cover letter that begins with the ominous words, “To the owner of apartment…” That’s when your knees start knocking and your hands start shaking. In ornate language you’re “invited” to attend. At that point Hollywood endings go out the window.

But stapled to the ominous note is a potential reprieve, like a last cigarette before the firing squad. Your cigarette is a delega, or proxy. And it’s an amazing thing. You can actually ask someone else to take the bullet for you. All you need is a name, apartment number, and a signature. Suddenly, you’re focused on one thing and one thing only: finding that someone.

Simple, right? About as simple as winning a billion-dollar lottery ticket.

Apartment complexes are usually divided into two camps: people who have to attend the meeting because something on the agenda concerns them directly, and the horror show addicts. After the general summons, the second group often finds itself besieged with gifts. People leave food, wine and other presents in front of their doors — along with the sign-on-the-dotted-line proxy.

Unfortunately, Italian law doesn’t allow an owner to accept more than three proxies, so you better do your gift shopping fast. Otherwise you’re probably stuck with going. Don’t count on help from a sudden bout of flu, evening work meetings or traffic. They never cooperate. You’ll usually find yourself tragically able-bodied. Off you go.

Most apartment complexes hold condo meetings in owner homes picked by lottery (a separate horror story). If you happen to draw hosting duties, forget pretending you’re not home. Early on the meeting day, condo members start buzzing around your front door until you basically have to let them in. If you ever wondered what the TV series “The Walking Dead” is about, now you know.

Thankfully, my building has its own condo conference room, a kind of latter day mini-Coliseum where local gladiators, lions, and Christians can do battle for hours at a time. The meetings are supposed to be about finding polite, collective solutions to building problems (heating, parking, taxes, etc.) — a neighborly exercise in civics. In fact, frustrated husbands and browbeaten wives congregate for the kill. Anything alive is fair game in the no-limits spirit of a “Survivor”-style reality show.

The condo president, known as the amminstratore, or apartment block chief, runs the agenda and tries “administering” moderation (good luck). It’s one of world’s riskiest occupations, in line with bomb disposal techs, lion tamers, and 200-story-high skyscraper window washers. The administrator is the first to get there and the last to leave, dead or alive.

He or she is tasked with starting things up — “I hereby open this meeting…” — and introducing the pre-arranged order of business, a list of talking points. Again, that how it’s supposed to work.

In fact, the order of business goes up in smoke a few minutes after the introduction of point 1, whatever it is. That’s about the time when condo members decide enough is enough and it’s time to transform themselves into full-scale vigilantes. The meeting then collapses into the kind of chaos only the Italian government does better — never mind who’s in charge.

I’ve come to look at these meetings as a way to enhance my understanding of social anthropology. They’re where I can study and admire (yes) Italy’s vast collection of nearly mythological creatures. I’ve even learned to distinguish them:

The ball-buster: This creature is male, usually between 50 and 70, friendless, with no known social life. He attends for one reason alone: to veto any proposal the collective decides might be potentially useful, with the goal of ensuring subsequent chaos. He favors getting his apartment redone if paid for by the condo. He exists to pick fights and the meetings are his natural habitat.

The Incompetent: Like every human, this creature has a brain, but prefers leaving it at home. The role of the incompetent is to make outrageous and costly proposals that somehow seem to make perfect sense in his parallel universe, as in getting garden gnomes, say, or installing a slot machine in the elevator.

The Miser: Often a pensioner with prostate problems and bad breath, the miser exists to cut costs. To save on cleaning stairwells he’d gladly eliminate the stairs. He’s stuck in the Stone Age and considers his cuckoo clock as high tech.

None of these creatures ever miss a meeting. They were created for them. You sit there, watching and listening, all the while thinking the Mayan civilization really does deserve a second chance.

What wine do I turn to when I escape condo meeting hell? Usually something hot, strong, if not fiery. Only a great Blend Bordolese Siciliano gives me that kind of post-Walking Dead feeling.

This ruby red wine is as extraordinary as the land it comes from. Its intense and all-encompassing bouquet of fruit, mint and minerals is a prelude to the taste of sweet spices and liquorices, which your palate savors. Its elegant, sinuous tannins go hand-in-hand with an elegant, fruity finish.

Cook up a mixed grill with a side of roasted potatoes. The meat and wine might help you forget the alien nation around you, at least for a night.