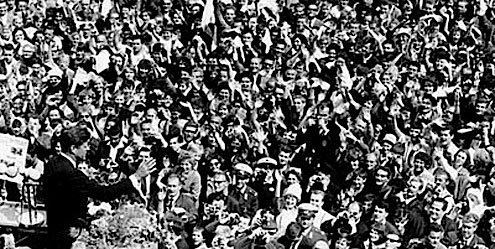 ecovery’s the word Or is it? Look at the dollar. Look at the Dow. Behold Europe, old and new, imitating the United States as gently as hammer to thumb. On talk shows Italian politicians wield folders that read “executive summary,” “business plan” and “authority.” Pundits talk about “devolution” and “fair play.” The leadership of miserable Alitalia tells critics it can’t be measured against American companies. Not fair.

We’re the man again, the globe’s executive summarizer, its authority. Loathing and love are again measured in cultural deference. It’s what they think of us. We’re mega, hyper and real; we’re angry, photogenic and cool; we’re borrowed from for our bluster. Hyper-power sounds like something a dam does to water, but there you have it: all us, all the time.

To recover is not only to restore your currency against the European interloper but also to belong among others, and enjoy it. And we don’t. Can’t, some would say. Enemies abound.

In Greece, Olympics in view, the plan is to put Americans on a British liner, the latest Queen Mary, athletes walking on water, to keep them safe from the tentacles of evil. If soldiers die in Iraq, at least NBA basketball players, millionaires, should not die in noisy Athens. Athens is a slur these days, a percolating notion of the coming sinister. Armies of media are being assembled to meet armies of darkness, courting the prophecies of some moody Western in which the rancher looks into the distance and says, “I have a bad feeling about this…”

Recovery’s the word. But not always.

I wrote a fiction for this magazine about terrorist bombs exploding in Rome’s Piazza Navona, killing hundreds. The intent was partly vicious irony, comic book shock-horror. But these days most everyone reads comic books literally. Few grin and fewer reflect; they read speech bubbles as conspiratorial chapter and verse.

The U.S. Embassy in Rome is so rigid with barricades it fouls all notions of the ambassadorial, which once meant presence, a sense of stock, even in harm’s way. At no time in World War II was the American Embassy in London ever sealed off.

Ah yes, you respond, but in those days the bad guys were evident, meaty, had names like hurricanes: Heinrich, Albert, Eva. Now, it’s about protecting and preserving.

But, by that logic, not recovering.

Under the terms of the current global lockdown JFK, at home with symbolism, should have bypassed Berlin and dispensed with “Icht ein Berliner!” Soviet agents might have assassinated him, a step ahead of a Texas gunman. What a fool, that JFK, leader of an incipient hyper-power, to sally forth to a summit in the enemy’s plain sight.

I know: the opponent then was a state, and states play by agreed-upon rules. Even the Holocaust vomited rules. Not so among the “shadowy” (the word itself sponges from action heroes of the 1930s and 40s.)

We’re recovering but not adjusting.

We’re unwilling to try again, to invite others, all others, back into the fold – even at our own risk. Embassies are fortresses, security is folklore with a siren; using nonviolence against violence is far too radical, and conceivably visionary, for literalists to understand. They know only to build one fort, then a second, and if the first and second are eliminated, a third.

What we fail to realize, as always, is that we’re being watched closely. Culture we might covet, the rancher, the reality show, the Matrix, is exported as fodder, and bites back. We refine walls while others, envying the brokerage-house wealth behind them, scheme to shatter their supremacy. We react to effects without considering our involvement in the causes, in Arabia, in Europe, in Asia. Executive, we can no longer see ourselves through rebel eyes.

It’s hard to fathom diversity that isn’t one’s own. It’s demanding to make sense of those absurd enough to blow themselves up enough to make a case for the ultimate parity, death. Ticking off global terror threats is simpler, more lucrative, and punitive, than inviting folk to consider why have-not enemies, whether in Iraq or Palestine, have grown messily suicidal.

To say terrorism may be a deformity more responsive to dissuasion than defeat is more detestable than terrorism itself. Doubt has tight crawl space when you’re mighty, authoritative, and recovering. Just look at the dollar, look at the Dow.