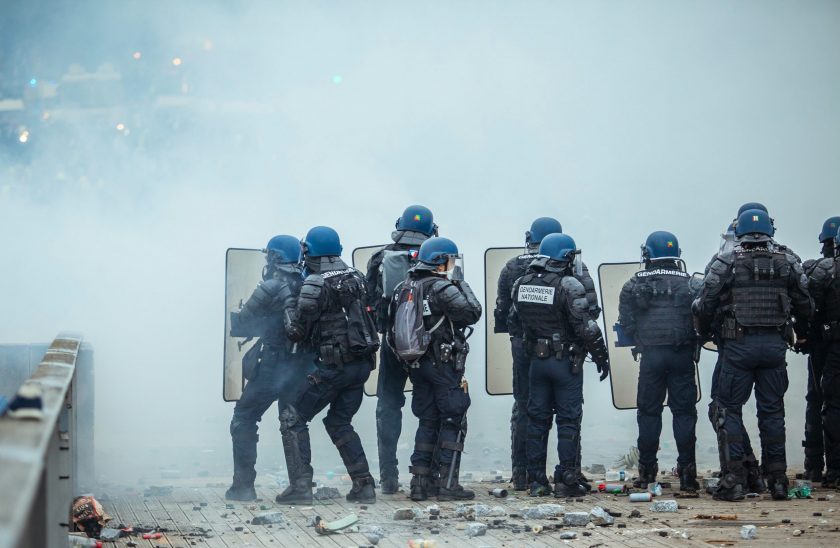 These may be edgy times, the author says, but there's no reason to panic.
L

et me start with the spoilers: No, this is not about Rebecca. Yes, the authorities were called. Yes, men in funny suits appeared and told us to stay indoors. And yes, although the perpetration itself was fairly benign, the perpetrator has been arrested.

Now then, we – “we” being me and my nineteen-year-old of global fame – reside in a suburban neighborhood in the wealthiest household of three houses at the end of a cul-de-sac with enough weeds and grass that we might even be able to get away with calling ourselves “semi-rural.”

The center of town is about ten miles away, and you need to hop on a piece of jagged freeway to get there. The three houses at the end of the cul-de-sac all have spacious, if poorly groomed yards — a paradise for the local deer and raccoon that come around looking for higher education (which, for them, means food).

In general, the deer and raccoon do not get along and keep separate hours in order to maintain the peace. During regular daylight hours, though, it’s not uncommon to hear Rebecca say, “There are two of them on the lawn” — an announcement of a brief deer visitation.

On this particular morning, however, it was something different — and outside animal office hours. Sometime around 6:15 a.m., I heard what sounded like bleating coming from the back yard. Upon heading out to investigate, I discovered two sheep.

When you say “sheep” at 6:16 in the morning, it’s best to get more coffee — and this cup was loaded. When I went back to the window, determined to see deer, I saw nothing.

Except, the bleating was now coming from the front yard.

I put down the coffee, opened the front door (Becca was still sleeping) and saw “them” — two sheep. Real sheep. White sheep. I did not say ordinary sheep.

When you say “sheep” at 6:16 in the morning, it’s best to get more coffee — and this cup was loaded.

The sheep also saw me, and seemed entirely unimpressed. That might have been because they knew they were dressed to kill.

Each one had a fancy COVID mask, one red and one blue, tied very professionally around their necks as if they’d removed them for a moment to take in some grass.

The second curious detail I noticed about the sheep was that they had a cloth around their bellies emblazoned with the word “HAZMAT.”

As I stared at my strange visitors, I reconsidered the night before. Had I sipped too much Chardonnay? Had I mistaken the Advil I’d taken for my ample supply of in-your-dreams LSD? No to both. I was clean.

My phone buzzed. It was Mrs. Miller, two doors down, sending me images of the sheep which were, by now, sauntering down the street.

She was already screaming that terrorists of unknown origin were trying to contaminate the cul-de-sac with viral farm animals. This was unlikely, I told her in an attempt to calm her nerves, insisting there had to be a reason.

But the phone kept buzzing as other neighbors chipped in with their own peculiar versions of paranoia. (“It’s the Feds! They want us sick,” said Joe the Plumber, who claims he once ran with a nationalist militia.)

I ran into the street after our mysterious guests. Half a block up from the cul-de-sac, the two sheep seemed clearly unsure about what to do next, as if they’d lost communication with their terrorist cell and, being sheep, had no choice but to loll around.

Up and down the block, not a single early morning commuter had left their homes. They were all barricaded in.

“It’s the Feds! They want us sick,” said Joe the Plumber, who claims he once ran with a nationalist militia.

The mask-clad terrorists eventually decided to eat something on Mrs. Miller’s lawn, and the next thing I heard were sirens. Lots of them. Along with the police came a HAZMAT truck and three agents that looked like the Men in Black, only with gas masks.

“Sir,” said one, sounding very official. “This could be a contaminated area. Please step inside.”

I told him what I thought (that it was a prank), but his suggestion to head indoors wasn’t negotiable.

Safely back in the house, I watched from the window as strange, hooded humans attempted to corral the sheep, who had split up and made any such attempts difficult — no doubt part of the COVID terrorist cul-de-sac attack plan.

It took an hour for them to catch the sheep and cart them off, after which agents stopped by the house. They refused to answer our questions, instead asking us if we were vaccinated and demanding that we sit still until we were given some sort of all-clear.

But did sheep carry COVID? I asked one agent.

He and Mrs. Miller seemed more like the panicked ones.

Becca was up, already furiously sending sheep texts and laughing. (Bless her for still knowing the value of laughter in times so dead-serious, when everyone seems afraid that they’re going to die or face constant risk — COVID isn’t just a virus, after all, but some sort of mission statement from Satan himself, whose PR people really do seem to have the upper hand.)

When we finally got the all-clear, Mrs. Miller refused to go to work, booking a swab test instead.

How did this all happen?

Well, about a mile up the road from our cul-de-sac is a farm that keeps sheep. It’s owned by a man named Gaston.

Gaston doesn’t get around much, but when I do see him (or, when I last saw him at the hardware store), he complained the world had gone crazy over a virus when diseases killed animals and people all the time — always had, and always would.

We’d become a race of wimps, not because we weren’t right to try stave off the virus but rather because everyone seemed to be treating the whole thing as a world-ending scourge, which it wasn’t. But because they were acting as if it were, his business — and lots of others — were in deep trouble.

“People are spending billions of dollars to scare the world to death,” he’d said. Those words I remembered, and I didn’t consider them too far off base.

In any event, one fine day, Gaston decided to play a practical joke on the cul-de-sac which, thanks to Mrs. Miller’s zeal, had become a self-styled “safety zone”.

She’d patrol the sidewalks and tell anyone without a mask that they were threatening humanity and behaving in a reprehensibly selfish way. When she’d charged up to Becca, I had jumped in and asked her to please to keep her policing to her own ground. She’d stalked away furiously.

Anyway, Gaston had found the red and blue masks, tied them more or less around the necks of the two sheep, had the HAZMAT sign custom printed, and put the unsuspecting creatures in his truck. He’d let them out at 5 a.m. and intended to collect them at 7 — hoping, of course, to get into it with Mrs. Miller.

“People are spending billions of dollars to scare the world to death,” he’d said.  And I didn’t consider it too far off base.

The whole time he was parked around the block, but by the time HAZMAT and the counter-terrorism agents arrived, no one would listen when he tried to explain that he had been behind it all. They’d instead asked him to put on a mask, step aside, and go home — leaving the rogue sheep to cause even more of a fuss than he’d imagined.

Gaston was later picked up, charged with creating a public nuisance, and pilloried by Mrs, Miller on the internet in what quickly became a hate campaign as mean as the virus itself.

All over a prank.

Okay, yes, I get it. These are edgy times. Many fear for their safety and practice saying “be safe” every night before bedtime. But please, for the love of God, or Jesus, or Groucho Marx — can we please, all of us, try to dial it down a bit?

Two sheep in a cul-de-sac triggered intimations of imminent doom. Few on the block left their homes that day. Gaston received insults from Dayton to D.C., where no doubt President Biden got a briefing on the “attack”.

By the next day all was forgotten (except by Mrs. Miller) and life had returned to deer-and-raccoon normal (the normal, of course, of these “plague” day).

Truth be told, I thought the sheep looked good in red and blue. Gaston should have let loose a third — this one with a white mask. I would have played the “Star Spangled Banner.”

Maybe when the dust settles, I’ll take Becca up to his farm where he also has ducks, ponies, and wild geese. All of them extremely hazardous, of course, so rest assured we’ll go dressed in full body armor.