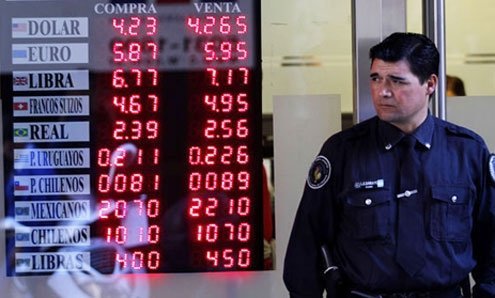 The Argentine peso is taking a beating, with inflation soaring.
S

even years of recession have left their mark. The West is “officially” out of the economic rut it has been mired in over the last few years, and the economies of the industrialized countries have started growing again. Even Italy is now on the plus side, albeit at a 0.1 rate. Growth is still minuscule, about two percent in the United States and a straggling 0.3 percent for the euro area. At this pace economic systems will need some 15 years before they return to pre-crisis levels. Growth is likely to increase in 2014, perhaps to three percent for the U.S. and around two percent for the euro area. This is still far below the recovery rates after previous downturns.

The indicators for the month of January are not encouraging. Stock markets have fallen, investments are still down, and several countries in the developing world show signs of serious stress.

The world economy seems, overall, to have evolved into three distinct areas: the industrialized countries; the intermediate countries, such as China, India, Brazil and the oil producers of the Middle East; and a mixed group of others, some rapidly moving toward self sustaining economic growth, others heavily dependent on the export of raw materials. The unprecedented explosion of commodity prices over the last decade — largely unobserved and unremarked upon — was largely the result of war, an abundance of easy and cheap money, and financial speculation.

High commodity prices helped out raw material producers and sharply curtailed disposable incomes in consuming countries. Contrary to previous cycles of commodity price increases (1972-76 is an example), the governments of industrialized countries did not defend internal purchasing power through deficit spending. The U.S., more than any other government, pumped liquidity into the system, but even its actions were limited.

Meanwhile currencies held relatively stable. Currency movements in 2013 were rather slow and nothing today seems to point to coming upheavals — at least not in the industrialized world. By contrast, commodity prices have weakened. The Economist‘s commodity price index shows a fall of around 14 percent in 2013, and prices are expected to drop further in the next few months. In the West’s importing countries, those falling prices will gradually increase disposable income.

The downward trend is also beginning to have an impact on raw material-exporting countries, however. The ongoing Argentine currency crisis — the peso is plunging — may well spread to more Latin American and other commodity-dependent countries. All this is tied to rising interest rates: the cost of money. If borrowing costs rise, as seems likely, commodity prices will continue to fall, further exacerbating economic crisis in producing countries.

In the importing countries, however, lower commodity prices could substantially improve levels of disposable income and partly offset the drag produced by austerity policies. Indeed, attention has begun to turn away from inflation and austerity policies toward the dangers posed by the potential deflationary spiral that may threaten industrialized countries.

Paradoxically, there’s a chance we may see purchasing power rise slowly (thanks to lower commodity prices) while the economy goes into a stall. In other words, a spread of the so-called Japanese stagnation syndrome of the 1990s: low prices accompanied by extremely low economic growth. Massive Japanese deficit spending failed to reverse the situation.

Finally, we cannot ignore the economic consequences of several deep political and social crises around the world. Civil and political strife is having a corrosive economic effect on Ukraine, as well as on Turkey, Egypt, Libya, Syria, Thailand, and several others. Though these states are economically marginal on an individual basis, the unrest within them, taken as a whole, risks dampening world trade and casting uncertainty elsewhere.

To this we may add the expected slowdown of economic “tigers” such as China, India and Brazil. The situation of the newly emergent economies and the risks they face was discussed at length at the recent Davos summit for the first time. It was a clear sign that the business elite is cognizant of their problems, but no answers have yet emerged.

We can expect change in 2014, but how it will pan out globally is unclear. Entertaining optimism would be premature.