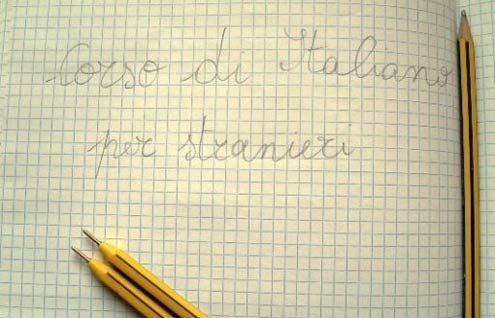 After "quanti costa?" come the woes of learning begin.
W

inter in New Hampshire seemed long and cold and life in America was passing me by. Italy had beckoned since I had lived in Sicily in the early 1980s. I longed to be return to a society that embraced food, wine and love. Speaking the language would surely set me apart from the casual traveler, or so I thought.

I could never afford the high season travel nor did I want to be lost in the summertime shuffle. I did want to be immersed in all things Italian so I chose Spoleto as my destination, hoping it would welcome me. I arrived in Perugia on New Year’s Day.

My driver Roberto, who got me from Perugia to Spoleto, made it clear from the start that the few words I’d picked up in Sicily (and could barely remember) wouldn’t suffice. I managed quanti costa? when he dropped me at my flat, home for the next three months.

I unpacked, shook off my jet lag and went to meet Elisa, the Italian teacher I hoped would make it all better. What I found was a 90-pound woman who hadn’t turned 30. How, I wondered, could she possibly teach this old dog any new tricks, much less another language?

As I handed over the €100 for four lessons, I imagined she was thinking, “Like taking candy from a baby.” Smiling sweetly, tiny and adorable Elisa then gestured to me to have a seat. She handed me a packet all in Italian, of course.

I suddenly felt like I was back in first grade. Maybe Elisa wasn’t even a teacher. Maybe it was all a scam. Why hadn’t she spoken a word of English? I badly wanted to concentrate, but couldn’t. She spoke only Italian, which I don’t understand, which is why I came to her in the first place. I looked around the room for cameras (America’s Funniest Home Videos International? Maybe that was how Elisa supplemented her income.)

Suddenly, she said: “Judita! Come ti chiami?” I knew it! She was fake! She already knew my name and now she was asking for it again. Next, she’d want my Social Security number. Again: “Judita, come ti chiami?”

She probably didn’t even speak English, which was why she came up with the whole language “immersion” deal.

“Brava, brava, Judita,” she said with 90 pounds of smile.

Oh, so that was it. She’d ask a bunch of questions in Italian so I’d have to respond in Italian. But that also meant I’d have to figure out what she was asking.

I remembered that “dove” was “where.” I pursed my lips: “Sono Americana de New Hampshire.”

Little Miss Elisa (probably a fake name) nearly fell out of the second story window of her fake school. “Brava, BRAVA Judita!” She was so cute I even threw in an “E tu?“

Big mistake. She then thought I knew far more than I did and started in on rapid-fire Italian. “Judita, quanti anni hai?”

OMG: I understood the question but what was the word for six? Four would have to do. “Sono quatro quarto,” I said. Hey, since the language school was a sham I figure I could be 44 while I worked on how to say six, which finally came to mind as “sessanta.”

I couldn’t very well lie to her? She was only 29 and I didn’t want her believing that in 15 short years she’d look like. (Insert sad face here.)

Oh boy. How exactly could I say I was living on half of my former spouse’s military pension and that he hates me? So I came up with something far more respectable.

“Sono scrittrice.” Hey, being a writer is far better than being a deadbeat ex-wife on the dole from Uncle Sam — an uncle Elisa had probably never heard of (the beggar I saw on a Spoleto street probably wanted to know Uncle Sam, too, but never mind: today I would be a famous author from America.)

Suddenly I no longer lived in New Hampshire but in the State of Pretend, just like little Miss Elisa and her pretend school.

Next question: “Sposata?” Uh-oh… that sounded like spouse. Was she asking if I had one, wanted one, used to have one and never wanted one again? I gave it a try and said “No, non sposata.” I wasn’t sure if that was grammatically correct but it was honest: I don’t have one and don’t want one.

Suddenly, the tension broke. The clock tower chimed 11 times. Lesson over. Chimes never sounded so good. Basta! The first lesson was behind me and I was exhausted.

As I headed out the door I ran into another American woman going in for her “class.” I wondered if she knew about the scam. I introduced myself in Italian and extended my hand for a “Let’s get together” handshake. She shifted the books in her arms, gave me the wet-fish shake, and slid past me on the narrow stairs. Not to worry. Elisa would probably make her say “Sono una brutta Americana…“

Walking home (passeggiata) I tried practiced my lesson while dodging dove droppings. I felt disappointed. I had wanted to learn words and phrases that would enrich my stay in Spoleto. As in: “Where does Fabio live? Are you rich, Fabio? Do you like younger women? I am only 44.”