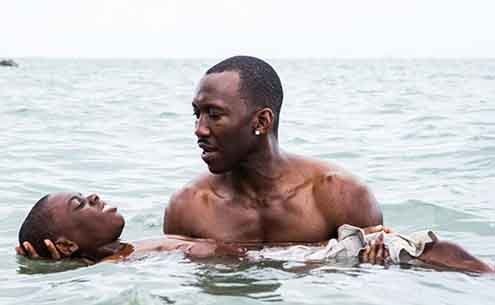 Mahershala Ali's Juan with Little in Barry Jenkins' "Moonlight."
I

n an early scene of this powerful and unusual film, a boy called Chiron but nicknamed Little (at this point nine years old) is rescued from bullies by Juan (Mahershala Ali), a well-built drug dealer with a heart of gold and a commitment to helping the youth confront his challenging circumstances. What’s striking about this sequence is that neither Juan nor his girlfriend Teresa (Janelle Monáe) — gorgeous, and just as decent as Juan — can get Little (Alex R. Hibbert) to speak. Indeed, his silence, or virtual silence, continues as Little evolves into terrorized teenager Chiron (Ashton Sanders) and, years later, now with the nickname Black (Trevante Rhodes), into a character with Juan’s hard body and, unexpectedly and tragically, his drug dealing occupation.

Not long ago, Little/Chiron/Black would have been described as “shy.” Today, after the publication of Susan Cainns book “Quiet,” the preferred word would be “introvert,” and the connotation positive (the full-blown title of her 2012 best-seller was ” Quiet: The Power of Introverts in a World That Can’t Stop Talking.”) But neither word — shy or introvert — adequately explain the central character, whose resistance to speech reflects something as profound as his failure to be himself (if there is a self to be) or even to articulate what that self might look like.

In the 19th century, it was commonly believed that the self possessed a core, referred to as “character.” In the next century, confidence in this concept of the self diminished, replaced by the idea of “personality.” The self was seen as more malleable and multifarious, more a matter of what others imagined one to be than anything inherently individual.

Chiron, whatever his nickname, is defined by an unstable identity, a “personality” produced from without. His three names are all given to him by others, something that exasperates even Black — “What kind of person gives other people names?” he asks teenage friend Kevin.

Significantly, in Greek mythology the name Chiron was that of an enigmatic centaur with a reputation for war-making and muscular carousing while also uniquely human, civilized, intelligent and kind. That description fits Juan and, later, Black, but it’s also code for instability and incoherence.

The story places the homosexuality of Little/Chiron/Black — latent at first, then active, but barely — into the foreground and invites the viewer to see it as the crux of the character’s problems, as if being able to understand and articulate the sexuality that lies at the core his being, that is presumably his essence, would set him on a satisfying life path. Over all, the issue of homosexuality is treated with subtlety and sensitivity, with one glaring exception — when Juan offers Little an empathetic dictionary definition of a faggot.

That’s an important theme to be sure, but to the film’s credit it resists psychoanalytic and sociological frameworks, opting instead for a wider assessment of Chiron’s behavior, allowing even for indeterminacy.

On the one hand, Little/Chiron/Black is the product of a series of betrayals. He’s the son of a drug-using mother who failed to nurture him in any way, even to feed him. His potential role model Juan possesses a secret he’ll finds unforgiveable. His weak best friend Kevin (Jharrel Jerome) abandons him to the most malevolent of school bullies (played menacingly by Patrick Decile). School principal (Tanisha Cidel) can’t understand him and he literally tunes her out. Juan’s beatific Teresa just disappears.

In these relationships, food is that which nurtures (an older Kevin makes him supper in his restaurant) and water takes on a host of meanings: sex, trust and baptism (the iconic learning-to-swim scene), and healing. At the same time, there’s also a sense that life’s progress may be random. As Kevin, whose life trajectory has been only modestly more satisfying than Black’s, laments, “I didn’t do anything I chose.”

As pathetic as that sounds, it’s more than Black can muster from some 40 years of existence. In the end he’s as impenetrable and quiet as he was as a nine-year-old. Still unable to talk, and hence unable to imagine and explore what a good life might be and how to begin to achieve it. Perhaps, like Hamlet, some of the responsibility is his.

This small film, written and directed by Barry Jenkins (and filmed in Miami), has an engaging look and is filled with intimate shots befitting the sensitivity of the subject and the main character. The acting is uniformly superb, an achievement given the protagonist and Kevin are played by three characters of different ages. The transition to a new character in each “chapter” is foreshadowed, making it both fluid and startling. The soundtrack by Nicholas Britell, who also wrote the spirituals for “Twelve Years a Slave,” seems heavy-handed at times, but it also underscores the emotional content of the film. “Moonlight,” composer Britell said in an interview, “felt like poetry, it was beautiful and tender.” No argument there.