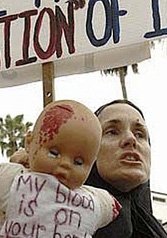 When the dirty laundry comes round.
M

This is much ado about George W. Bush as the United States struggles with growing revulsion about sins of commission and omission in Iraq. Anti-Americanism is back in vogue, as if its temperature depended only on spikes in 24/7 news reports. (This week it’s torture chambers.)

In June The American will publish essays by two American women living in Italy, a young lawyer and an editor, stridently disapproving of presidential policies.

Both do so with evident love of country, and amid Italian scorn.

The fury from some Europeans toward the United States is hardly about American character or culture, which still attracts and conquers benignly. It’s specifically about Bush and Donald Rumsfeld, Bush and Condi Rice, Bush and Dick Cheney. Anti-Americanism in Europe doesn’t have Matt Damon or George Clooney in its crosshairs; it’s not lumped on the shoulders of artists and musicians who tour the planet to widespread affection and applause; it’s not about English teachers or talking-heads.

Bush is an obvious target among who feel obliged to resist American policy – or face peer pressure for failing appropriate revulsion when confronted by an obstinate and folksy super-leader.

Hate-Bush sentiment is its own league, rivaling (in reverse) ill-fated Western affection for Josef Stalin.

Bush exists to undo the thin-skinned.

To them, he’s the ultimate “anti-astute,” the perfect brute, schooled in illiberal arts and offensive to the European holy trinity of sensibility, diplomacy and cleverness. Even his staunchest political allies, while still deferential, wince a little nowadays – Tony Blair looks positively pinched. Black-art rights abuses in Iraq hardly help, nor do Bush’s earnest apologies, which, to the haters, sound dissembling.

But why does this president enrage so viscerally?

It’s in part because he exudes a galling rightness that roils the powerless (as well as the would-be powerful) and goes about “fixing” nations as if part of a personal immortality project. But the action-hero aspect of the American presidency is hardly new.

Issues of political legitimacy are.

In class-conscious Europe, sections of public opinion remain chattily convinced (over beers and wine) that Bush is an unauthorized leader who owes his presidency to Florida’s arcane mischief. Most don’t know to elaborate upon the crudeness but know to believe it: And a belief in ideas, as Bush has demonstrated in the post-September 11 world, is fundamental to the battle, if not the war.

Bush lost the popular vote in 2000. And since direct election is what Europeans – wed to parliamentary proportions – adore to envy, he can be thought an unwanted president, even by his own nation. (The electoral college is understood by few.)

So why, four years later, are Americans not yet uniting to turn him out – not on Web blogs, but in voter blocks? This is where anti-Bush resentment meets unvarnished anti-Americanism, and Bush’s America becomes all of America.

The European left can lump its Bush complaints alongside the corporate haughtiness of Italian Prime Minister Silvio Berlusconi – fat-cats ripe for contempt. It can dust off oil-grab theories to explain Iraq. And when Disney tells Miramax it won’t distribute a Michael Moore movie about Bush’s relationship with Saudi royalty, the left gets gassed.

Which in turn gears up European conspiracy theorists. Americans picked former Vice President Al Gore but, after secret manipulations, found Bush and his cabal in the White House. Along came 9/11 (perhaps engineered by Israeli or U.S. secret services), after which Iraq (all about oil and vendetta), and so on. A wearying and wrong-headed litany, yes, but part of the canon.

There is another part.

Recently, Maureen Dowd of The New York Times sounded every bit like The American’s two essayists when she called torture charges against U.S. troops “the latest example of a dysfunctional and twisted occupation warped by arrogance over experience, ideology over common sense.”

Make jeans and pop music for export, and the world buys – from you. Peddle Coke and movie stars, and the planet purchases – from you. Market urban violence, a weapons cult, as well as the weapons themselves, and bad guys procure both concept and guns – from you.

It’s no different with self-criticism. Most anti-Americanism is Made-in-America, whether death-penalty dissent or public footage of torture in Iraq. Tell the world about your in-house black eye and some of the same world feels to punch out the other.

The most fascinating aspect of anti-Americanism is how it hinges on envy and imitation. We bash ourselves because we’re strong enough to take it, and because democracy allows it. And because we can, others also wish to do it, and to do it better.

To be so cool, alas, is to make it very personal, and it hurts.