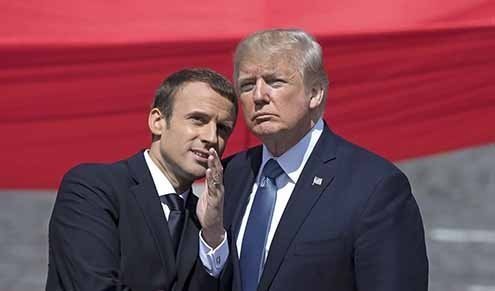 French President Emmanuele Macron's so-called "charm offensive" was anything but casual.
I

t was a spectacular parade that newly elected French President Emmanuel Macron put on to celebrate Bastille Day on July 14 before his guest of honor, U.S. President Donald Trump. The two leaders appeared to hit it off, and for a moment at least the embattled American appeared to forget his troubles at home.

The younger of the two Alpha males adopted an almost protective position towards his senior. We’ll see how that stance plays out. For the time being, Macron has obtained an enthusiastic reversal of Trump’s earlier badmouthing of France and Paris. Not long ago, unsettled by terrorist attacks, Trump insisted Paris was “not what it used to be,” but last week it had again become “the world’s most beautiful city.”

Macron had met with German Chancellor Angela Merkel just a few hours before Trump’s arrival. Very likely it was with her full backing that created the framework of what you might call a new “special relationship” between France and the U.S. The visit peeved the British, whose ruling party, the Conservatives — as well as the Theresa May government — hanging by a thread as Brexit negotiations grow increasingly complex and contentious.

London worries that a new Franco-American entente, which would indirectly include the European Union, could serious weaken its position. Regarding the divisive issue of global warming — as vital to the Europeans as it was to the previous American administration —Trump, flush with his Paris welcome, promised a reassessment of his policies. As things stand now, the U.S. president is very unpopular in Europe — and that’s putting it mildly. For him, a European “guarantor” (read France) could prove useful.

Only time will tell. Trump left Macron for Washington, where he’s embroiled in an increasingly thorny domestic crisis tied to the so-called Russiagate investigation. News that his son Donald Trump Jr. met with several unsavory Russians during the election campaign didn’t help. As several commentators pointed out, Donald Jr. and Macron are both 39 years old, but the difference between the two — Donald Jr.’s meetings were inept in every sense — is spectacular.

Worse for the embattled president, his controversial health care plan appears dead, undone by skeptical members of his own party. His angry demand that Congress abolish the Affordable Care Act, known as Obamacare, without a replacement in the wings is unlikely to make much progress.

The global picture is no more appetizing. In Asia, North Korea’s aggressive missile-launch posturing — which leaves little room for diplomacy — could lead to confrontation. In Latin America, domestic woes in both Brazil and Venezuela are deepening. In the Middle East, one crisis follows another. There’s no guarantee the recent retaking of Mosul, the ISIS capital in Iraq — achieved by Iraqi troops with extensive American help — will play out favorably. ISIS (or Daesh) is a Sunni movement obliquely backed by Saudi Arabia. In Iraq, however, power has shifted into Shia hands — and the Shias have deep and traditional ties to Trump arch-foe Iran.

The ongoing Middle Eastern Thirty Years War gets more complex and dangerous by the minute, witness the strange and unexpected struggle between Qatar (where the U.S. has important military bases) and the other Gulf states, which accuse Doha of funding global terrorism. There’s also the continuing civil war in Yemen and the Red Sea region and ongoing strife in Syria and Libya.

Saudi Arabia, no doubt convinced it received a blank check from Trump during his recent visit to Riyadh, has donned the mantle of regional Sunni superpower, demanding Qatar cut ties with Iran (a key trade partner) and close the Al-Jazeera TV network. All this has left Secretary of State Rex Tillerson with the formidable task of defusing a hydra-like crisis.

With luck, he may succeed in lessening the impact of Trump’s amateurish ventures in foreign policy. In that sense, he probably has the same aim as Macron, who by gaining Trump’s ear hopes to become among the president’s “trusted” Europeans.

Saudi Arabia may eventually retreat on its Qatar ultimatum and work toward compromise —perhaps in exchange for stiffer control over influential and popular Al-Jazeera, which the Saudis abhor. But much will depend on developments in Iraq and Syria.

Then there’s Turkey, with its revived Ottoman Empire-style ambitions, and the Kurds, who still long for a state of their own.

Several regional scenarios seem possible. One might be the creation of confederate states in Syria and Iraq, perhaps in the Swiss canton model. But the key question remains how Saudi Arabia and Iran, on powerfully separate ends of the political and religious spectrum, will choose to behave going forward. Is compromise a word in their vocabulary?

The Saudis appear the weaker in the long run, but enjoy U.S. backing. But how long will that relationship last, and at what price? Protecting vast oil reserves is only one factor in this difficult balance. It’s not inconceivable that Saudi Arabia could altogether disappear. All the major states in the region are less than a 100 years old, but Iran’s history is millennial, a strength that needs pondering.

For now, Macron’s words to Trump are useful. Perhaps over time the American president will learn that slogans and shortcuts won’t resolve the issues facing America and the world.