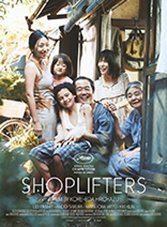 The “family” living together in one exceedingly crowded room consists of the grandmother, father, mother, adolescent son, and the mother’s younger sister. Early on they reluctantly take in a young neighbor being abused by her mother and her mother’s boyfriend. She’s called “Yuri,” which may or may not be her name. Indeed, none of the family members may be who they seem. There’s a temptation to whisper to one’s movie-going partner, “Now is she the mother? Is he her son?” It turns out this confusion is at the heart of acclaimed Japanese director Hirokazu Kore-eda’s Palme d’Or-winning portrait of Tokyo’s underclass, eking out a communal living in the wealthy metropolis.

The “family’s” means of making money are all suspect or tenuous. The grandmother taps the welfare state by pretending she’s the only one living in the subsidized home now housing six people, and she takes money off her husband’s son by a second marriage by playing the grieving widow whose husband was stolen by another woman. The mother loses her low-level job as an ironer in a factory because of the family’s vulnerability. The younger woman works – seemingly without guilt – in a peep-show. The father (an intense and affecting Lily Franky) shoplifts. He’s also taught Shota, the adolescent, how to shoplift. “What else do I have to teach him?” he says. And Shota tells his new friend Yuri (Miyu Sasaki) that only children who aren’t taught at home go to school. Despite their perilous state, the group has its pleasures, including crowding onto their tiny back porch to listen to fireworks they can’t see, a metaphor for their off-the-grid life.

The fabric that holds the group together starts unravelling when Shota (portrayed with emotional nuance by Jyo Kairi) is shamed by a shop owner as he begins to teach Yuri the trade. The fraying, and in the process, the revealing, of the family relationships occurs swiftly and shockingly, leaving the audience to ponder the meaning of this extraordinary family and its relationship to blood, poverty, petty crime, guilt, money and love.