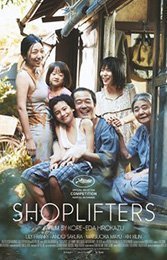 At a critical juncture in Japanese writer-director Koreeda Hirokazu’s 21st-century take on Dickensian-style urban misery, the lead character Osamu Shibata (Lily Franky) utters a line that defines the taint of the times: “Everyone gets a bit poorer by the day.” With legitimate work hard to find and euphemistic government welfare programs woefully out of sync, Koreeda’s shambolic family has taken to collective shoplifting to survive. This motley group of scammers, as fierce as they are kind, forms the backbone of a fairly conventional but beautifully rendered story about the relationship between piecemeal urban subsistence and the ties that bind. This is not the Japan of Tokyo neon, but a panorama of squalor on the fringes of a society parts of which, children included, have known only dispossession.

Koreedu is out to ask all sorts of questions. What does it mean to be a parent, even if the children under your care are not your own? How do you convey hope when daily life tends toward the hopeless? How do children forced by circumstances to be far older and tougher than their ages cope from within?

In an interview, Koreeda said the story came to him after reports that some down-and-out Japanese families were more closely bonded by crimes against each other, and against society, than loving bonds. But Koreeda refutes cynicism. Osamu’s wife Noboyu (Ando), at once fierce and compassionate, is ice cold when her husband brings home an abandoned waif for a warm meal. Soon, however, she will warm to the child (and new family member), renamed Rim. Tears flow without eyes turning moist. Growing poorer by the day also means working to survive, and survival demands empathy, however hard its shell.

Koreeda and his finely tuned actors don’t miss a beat. They ease into their direness and stick with it credibly. Shoplifting is not casual but a craft, and any craft builds purpose, out of which come goals, however modest.

The family that steals together, stays together, with dishonesty less a badge of dishonor than it is a fundamental component of underclass belonging. Literally translated, the film’s title, Manbiki Kazoku, means “Shoplifting Family,” and that, more than its Western title, hits both mark and mood. Awarded the Palme d’Or for best film at the 2018 Cannes Film Festival.