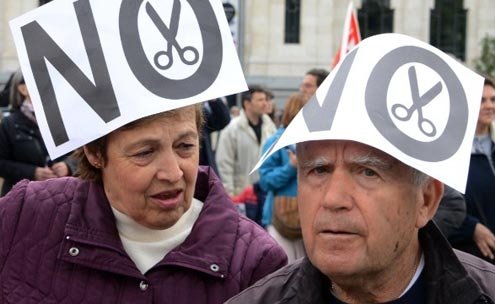 May Day protests in Madrid against ongoing austerity measures.
T

his year’s May Day celebrations were tense, with clashes and riots in several European countries.

More than ever, workers are feeling the brunt of the long recession, their anger and sense of insecurity increased not only by record unemployment levels but also by a disastrous fall in purchasing power.

Greece and Portugal are particularly on edge, but so are Italy, Spain, Cyprus and Slovenia. The situation in France, which has the EU’s second-largest economy, is also worsening.

But far more remarkable than any riots is that overall reactions remain quite muted. Despite deepening poverty and discontent produced by European austerity policies — policies that have aggravated the ongoing recession instead of fighting it — there have been no signs of outright revolt. But if recovery signs, however feeble, fail to emerge in the coming months (and none are expected before 2014) it’s hard to know how long popular patience will last.

Youth unemployment has reached intolerable rates, near 50 percent in Spain and only marginally less elsewhere in Europe. Recession has hit the housing sector hard, leaving it at a near standstill. Drop-offs in consumer demand are constraining industrial production while credit is scarce for small and medium sized companies, now failing at unprecedented rates. Anti-bank and anti-finance sentiment is running high.

The image of banks has been starkly worsened by top management salaries and bonuses, which remain astronomical. Worse still, these affluent managers were unable to impede disastrous speculative operations. The near debacle at Monte dei Paschi di Siena is a case in point.

But the banking sector remains in deep trouble for other reasons. Despite repeated ECB cash injections, capital ratios remain too low to expand lending, a direct symptom on the recession. Also ominous is the fall in new deposits and savings, related mostly to the collapse of disposable incomes in industrialized countries. The financial sector faces growing difficulties in attracting new deposits from an ever-shrinking pool.

Governments face a host of crisis-induced questions. Hardest of all is how to increase purchasing power while taxes remain high and budgets are being cut. The oft-repeated official line is that austerity measures will soon yield results. But by now most EU citizens know austerity is as political as it is fiscal, an awareness that may yet affect European unity and the survival of the euro. Though most of the EU has rallied around the idea of increasing financial resources to limit austerity’s impact, no one has yet emerged with workable plan to raise purchasing power — at least not one that acknowledges strenuous German and Northern European opposition to rises in budget deficits. Much hinges on September German elections, which depending on the outcome could lead to a new approach from Berlin.

The fact that France, Italy and Spain are now demanding changes in austerity policies could potentially bring results in the second half of the year. One possibility under discussion would see the European Commission detaching investments from the budget deficits calculations, which would remain at three percent of GNP. The idea would be to free up financial investments in infrastructure. But again, the devil is in the details, and a coherent policy has not yet been devised.

Some have envisioned this as a kind of European Marshall Plan, the postwar U.S. capital injection that successfully raised Europe from its wartime ruins. But the U.S. plan took three years to build, making an instant European counterpart hard to imagine in the short term. True, the institutional framework is already in place, which means potential implementation could be swift. But progress toward such a goal is improbable before the second half of 2014.

The best hope is that EU disposable incomes stabilize enough in the coming months to maintain industrial production and employment at least at present levels. The next step is awaiting positive effects from the “creative destruction” wrought by crisis, as theorized by Austrian economist Joseph Schumpeter in the 1930s.

Though the outlook is dismal, there’s a faint silver lining: commodity prices have started falling, down about 10 percent over the last 12 months (after having risen by more than 400 percent over the last decade). A slight slack in Asian demand, coupled with a drop from the rest of the world, is expected to extend the downward trend.

We may in fact be witnessing the beginning of a new commodity cycle. The downward trend would then continue, and possibly accelerate. Such rises and falls have happened often in the past. Falling commodity prices would then increase disposable incomes, stimulating both consumption and demand.

Hedge funds, on the other hand, whose speculation in commodities greatly contributed to the rise in prices, may see their profits tumble. They may have to look elsewhere to play their market games.