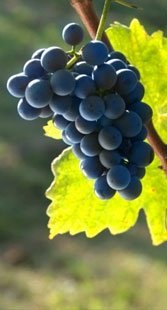 It's as if the grapes were gasping for oxygen...
I

was setting up a wine-tasting at an art gallery last month on the lower East Side when I felt my mobile phone vibrating inside my bistro apron pocket. I stepped out onto the litter-strewn sidewalk sideswiping a discarded beer can and pulled the phone to my ear.

I strained to hear my friend on the other end of the line, who between slurs and giggles finally managed to formulate a sentence. He was drinking a red wine from Friuli, which was pretty rare because that region is known for whites, but it was really crisp and elegant and it started with an “S” and ended with “ino.” He wanted to know what it was and insisted that we share a bottle together as soon as possible.

I rushed through my mental database of obscure Italian reds — and believe me, there’s one for every star in the sky — and somewhere before the end of the night it came to me.

I glanced around the room and noticing no empty glasses, I ducked under the table and called him back. Was it Schioppettino I asked?

A resounding yes, and the declaration that it was one of the best wines he’s ever had. Considering how much he’d had that evening, I was far from convinced, but I marveled at the mention of a wine I never thought I would encounter again, let alone in the United States.

Like so many of my cherished wine discoveries, I had my first glass of Schioppettino at the enoteca under my apartment back at Largo Somalia in Rome. On one of the first of few truly fall days I slipped inside and gave the owner my usual “just one glass” line. He told me to close my eyes as he always did.

I was never an expert guesser, but this one caught me particularly off guard. It was at once familiar yet completely unfamiliar. It reminded me of Northern Italy — where I’d spent some of my happiest moments and many a winter — yet I couldn’t tell you why. I now know that there’s a certain crispness, a quality I describe as “alpine-y” to be found in both red and white wines from northerly or mountainous regions.

It’s as if the grapes were gasping for oxygen at high altitudes, and their shortness of breath translates into a wine with a finer, thinner consistency. I notice it more in red wines — mainly because I’m expecting something richer and bolder — which makes the understated quality all the more noticeable.

Schioppettino, also referred to as Ribolla Nera, is a grape variety native to Friuli-Venezia-Giulia, in the northeast of Italy along the Slovenian border. It’s dark in color with a bright and rarely sharp acidity and clean, youthful aromas of flowers and wild berries. While the area is mostly known for white wines, Schioppettino comprises several of the Colli Orientali del Friuli DOC reds, specifically Schioppettino di Prepotto.

That night in the enoteca my one glass turned into several more. The air chilled outside and customers entered blowing on their prayer-clasped hands, and left their coats done up as they browsed.

Schioppettino felt like our little secret, a cool breeze from a far off place in only our two glasses, exotic yet unpretentious. Rare yet approachable. If ever I aspired to emulate the qualities in a wine, this was the one.

I tracked down a bottle at one of my favorite wine shops in New York City, and we opened it over Thanksgiving. A fire blazed in the hearth. As we sipped, we smelled the dried flowers and the promise of winter. Exactly as I’d remembered.

Schioppettino is a food friendly wine, but pairs best with gamier meats like turkey, duck or rabbit, and grana style cheeses. It’s also a delight on its own.

Some bottles to try: