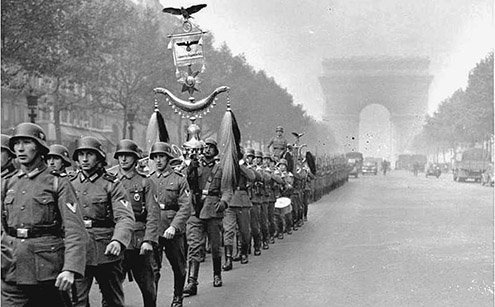 Democracy proved incapable of defending the people, wrote Spanish journalist Manuel Chavez Nogales about the Nazi occupation of France.
I

n a functioning democratic regime [Édourd] Daladier [French prime minister in 1940] would not have failed. Evaluating Daladier now we have to bear in mind the ever-present error of attributing to democracy the very crimes committed by its enemies. Daladier failed, and brought a catastrophic defeat on France, not because he was a democratic leader nor because a democratic regime was inevitably bound to lose but because anti democratic forces in France were allowed to operate criminally and without fear of reprisal, their only aim to sink the country in order to sink the regime. Democracy’s sin was that it did not stem those forces of destruction before they could cause a rebellion of the masses whose basest instincts had been artfully stimulated. Democracy proved incapable of defending the people, the real demos, from forces that in order to conquer and conserve power opted to embrace the barbarism of totalitarianism.

These bitter words were written exactly 75 years ago by liberal progressive journalist Manuel Chavez Nogales, a Spaniard in London exile, reflecting on the shockingly swift military defeat suffered by France, and with it Holland, Belgium, Denmark and Norway, in early 1940. The countries were overrun and occupied by Nazi Germany in a prelude to Adolf Hitler’s short-lived “new order.” The French army, headed by reactionary factions, hardly bothered to fight, preferring capitulation and collaboration to resistance. Most French industrialists and business leaders as well as large chunks of bureaucracy, intellectuals, churchmen, the country’s right wing forces, and even the Communists fiercely opposed France’s existing Third Republic. That Republic, managed by an incompetent, largely corrupt, ineffectual and despised political system, had been unable or unwilling to drag France out of a lingering depression that had seen a decline in the standard of living and rising unemployment.

Eight decades may seem like a long time ago, yet many of the ingredients that humbled France are back among us. The coming months will witness elections in Spain, politically paralyzed for well over six months, Italy, Britain (the somewhat irresponsible Brexit referendum) and the United States, soon to move from its primary phase to the general election.

Strong populist and anti-system forces have become significant actors in the wobbly political processes of all these countries.

In Europe, political stability is at risk from movements that lash out both at domestic government and European Union management. Mainstream political institutions are bearing the brunt of sharply declining standards of living and a bad job market, which has triggered a visceral (if illogical) fear of uncontrolled immigration. In recent Austrian presidential elections, a xenophobic candidate lost by a hairbreadth.

Significant chunks of European electorates have simply stopped believing in established political parties, if not the system behind them. In fact, so-called European populism is often mislabeled. Some populist movements are openly reactionary, creating national fissures similar to those Nogales alluded to in his 1940 French scenario.

European resentment has several causes. The European Commission has handled the recession ineptly, clinging to a conservative, monetarist approach. Though Germany conditions EU policy in its role as the de facto regional superpower, its crisis-thinking has been anything but imaginative. Nor has French President François Hollande been of much use. The former Communist countries of Eastern Europe, many now in the EU, are riddled with largely unrecognized social and economic problems. If you believe the Guardian newspaper, it is Matteo Renzi’s reform-minded Italy that is poised to play dynamic role in the debate about future EU management.

But not only Europe must live with decades-old ghosts. Political unrest in Brazil, Venezuela and Argentina reflect the stress caused by the economic decline of the so-called BRIC countries. That unforeseen decay — Brazil, Russia, India and China seemed economically unstoppable until recently — could eventually unsettle both democracy and geopolitical stability.

Nor have U.S. primary rites provided anything resembling reassurance. The politically storm-tossed U.S. seems anything but immune from European and Latin In fairness, the acerbic Democratic Party tussle between Hillary Clinton and Bernie Sanders may yet prove constructive. Sanders’ impressive string of primary victories suggests a real demand for a revision in the way politics is viewed. He’s managed to make a progressive platform extremely appealing to a wide swathe of voters. His performance has taken both the Democratic leadership and political pundits by surprise.

Yet his impact is still hard to gauge. Clinton may or may not tap into the Sanders vision once she finally wins the nomination.

On the Republican side, the Donald Trump steamroller is likely to have long-term political consequences whatever the outcome of his campaign. His ability to beat back conservative religious adversaries, mostly political pygmies with local support, may sound the death knell for the Tea Party faction that had dominated the party in recent years.

But in ideological terms, newcomer Trump seems very much in line with European right-wingers like France’s Marie Le Pen, Italy’s Matteo Salvini and England’s Nigel Farage. He appears to share many of their ideas and his presidential bid, assuming it’s not derailed, is likely to enjoy their vocal support.

Trump is a populist demagogue ready to change position on anything. At the same time, he’s not necessarily wedded to small government and bound to financial interests, the traditional bête noire of all populists. He’s openly Islamophobic, anti-European, and paradoxically willing to cooperate with Vladimir Putin of Russia. Though Clinton would be favored against Trump, she’d no doubt struggle to win over the disgruntled, bitter voters who form the bedrock of the Trump movement.

The real need is for sensible leaders with a clear vision and a strong hand. Unfortunately, whether you look to Europe, South America or the U.S., they seem in short supply.