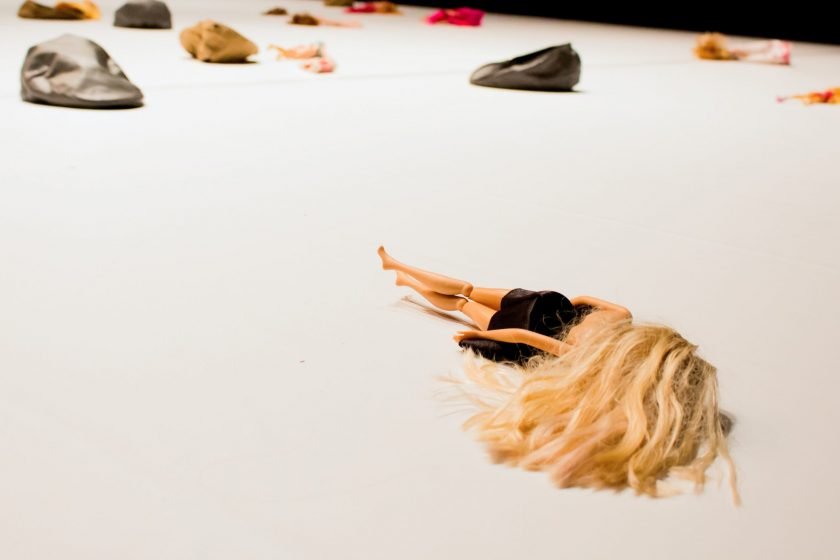 Becca and Barbie did not get along, and the latter was the was much the worse for the wear.
M

y increasingly scary 10-year-old Rebecca has officially entered her “Elon Musk” phase. It was probably there all along, just waiting for double-digits to leap out, much the way an alien comes out of some sort of pod park in the rear of a spacecraft.

A decade ago, two friends bought her two dolls – one a kind of plastic Barbie, do-it-yourself doll with flexible limbs and no vagina (who needs one in Wisconsin?). She promptly removed the limbs from their sockets and used a hand as a kind of pretend paperweight. Barbie’s torso ended up in the trash. The other doll was of the softer, cuddlier variety and received softer, cuddlier treatment. Rebecca named her Growny and immediately cut her hair. She preferred sleeping with a seared partner. I guess that went well enough until she spilled orange juice on Growny and, instead of cleaning it up, gave her the Barbie treatment – bin filling. So much for doll love.

Night Jays are wired to the brain so you can send and receive messages while you’re asleep.

Now Becca sleeps alone except for her pajamas, which she calls her “night suit.” When you have a daughter who calls pajamas a suit, you worry you might have a serial killer in the making sleeping down the hall. But, so far, I’m still here.

Becca’s latest scheme is to create intelligent pajamas, or cool “nightware,” as she calls it, careful to get her marketing and branding approach straight before the big-time campaign begins.

Becca’s “nightware” seems like an idea that a female Steve Jobs might have had before getting amped up over phones.

Here’s the deal: night wear isn’t just some clothing you put on when you go to sleep, but an interactive coverall that can be programmed for anything from dreams to the postponement of bathroom breaks in case you want to sleep longer or don’t want to get up at night. Somehow (trade secret) the “smart PJs” – “Night Jays” (a name she’s playing with) – are wired to the brain so you can send and receive messages while you’re asleep and, once she gets around to it, create software that allows the sleeper to film their dreams and send the coolest ones to a friend or post directly to social media. All this while in a sleep-wake, post-REM state the “Jay” works out with the brain. How it manages that, of course, is another trade secret.

Needless to say, all of this makes for an interesting Sunday morning conversation. The “Jay” of Becca’s dreams would be so self-sufficient it wouldn’t need anything like a night partner because the software itself would put that partner together from memories and desires and love of chocolate cake, which “Jay” couldn’t make as such but could allow you to taste in a dream. Who exactly is doing the cake-baking inside the “Jay” is another trade secret – somewhat annoying, considering I’m the one who usually bakes her those cakes. One day, I asked her my role in all this as her Dad and she didn’t miss a beat, let alone look up: “None. You’re just Dad.”

One day I asked her my role in all this as her Dad and she said, “None. You’re just Dad.”

So, Dad apparently has no say in the ways of the “Jay,” nor is he allowed to ask questions such as, “What happens if the software goes funky and you start having nightmares in which the cake tastes like salt?”

I guess such a question would have been tantamount to asking Jobs, “Um, Steve, what if that thing phone does, well, like, you know, not work …” He probably would have fired you and cursed your firstborn software.

For now, the “Jay” is only in Becca’s head, and when I kiss her goodnight I still see her covered in reassuring elephants meandering through a jungle, smiling. Each time I see her in those old-school pajamas, I’m reassured that the digital world is just a bad dream that anxious middle-aged Dads have to accept as punishment for marrying late.

Then again, I know my daughter and I remember the doll drama. It wouldn’t surprise me if one night I came in to say goodnight and she was in a black suit with a hoodie whose neck flap was connected to the brain by blue-lit wireless transmitters. I’d look for the elephants, even call them back one by one, but Becca would already be eating my chocolate cake while sending texts and posting to Night Twitter.

This would be my cue to go downstairs and open a beer – or maybe put on my own “Jay” and spend some quality time with Aldous Huxley.