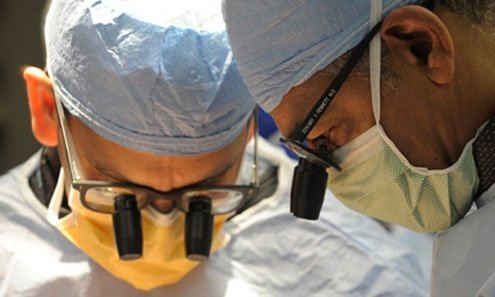 If the rodent fails to report back, it's building a dam.
I

am 42 years old and I just had my first colonoscopy. This was not my idea. My wife said she’d read that 40 was a good age for an adult male to start having plumbing and other assorted tubing examined. I told her I was not an adult male and wanted nothing in my tubing but she insisted. My doctor smiled; the nurse smiled; I did not. He told me to come back in five years. I will if I’m still married.

While at the doctor’s office and later at his clinic I had a chance to go through the list of a few procedures other adult males (and females) can now elect to enjoy, since being someone in America means talking about a procedure. Here are the most common, most of which I picked up while under anesthesia.

Radical Tittle: This painless procedure substitutes small darts for nipples. It stalls potential cancer cells and is very popular among young American women seeking a “Hunger Games” look and tired of reacting passively to harassment in the workplace or on bad dates. Colorful replacement darts are available online.

Acute Accu-treading: Tiny Canadians and Kenyans are placed in the feet and lungs of homophobic or agoraphobic patients to simulate long-distance running in sub-zero conditions with no shoes, from which the drowsy patient usually awakens without a passport but with a profound and immediate desire to visit Latin America and mingle with people of all kinds, regardless of sexual orientation (see brochure for more details).

Double Lappoclatter: The tongue is temporarily extracted so it can be laminated and thousands of very long words added, transforming laconic patients into loquacious ones and often leading the use of previously unknown expressions, including “oot, oot” and “sassa, sassa, sassa,” whose definition is covered in the post-op manual. This procedure is not covered by insurance, and, interestingly, is popular mostly among short Jewish men.

Optodesis: The fusing of two unimpressive eyes into a single all-knowing one located either on the forehead or in the chest cavity. This procedure is common among those tired of wearing glasses or contact lenses, as well as avid readers of mythology. Single, all-knowing eyes are manufactured by Apple and Samsung, and can be custom-designed to meet most body-type specifications. All-knowing eyes cannot be inserted after age 25, since after that age it roves too much (a phenomenon known as “check-outing.”). A “rear eye” is optional and usually positioned just above the buttocks on a custom platform.

Elective Auriculectomy: The removal of one ear to allow greater attention to be paid to the other ear. Removed ears are usually later inserted into government eavesdropping devices to give them a human dimension. Some American health care plans, particularly those in Washington, subsidize eligible candidates (they also recycle old ears).

Rotational Mammotrans: Breasts, caught early, are surgical rotated in roughly an west-east pattern giving nursing mothers relief from early onset teeth as well as a sense they’re living in rural India. Infants are supplied with apps explaining how to identify their preferred nipple to avoid outbreaks of hysteria.

Fulsome Pannibabble: A frequent choice of recently married men, this vaguely invasive procedure involves the insertion of leftover hormones from Eva Peron in an effort to make the body more capable of recognizing and following direct female orders. Usually, surgeons insert microscopic Peron icons into the head, vascular system and testes, leaving the latter tender and annoyed for decades. Couples in which the man has elected to have a Fannybab (as the procedure known) generally see greater an increase in both pain and marital harmony, with men more likely to agree to further invasive procedures, including the…

Corpo-Visco-Transectomy: The CVT, recommended for all those who might die someday, calls for the removal and refrigeration of all major organs, with basic ones (including heart and lungs) replaced by amusing commemorative plaques and on-demand videos relatives can watch and laugh at. Less vital organs, usually the gall bladder, parts of the large intestine, and the brain, are replaced by their digital equivalents, including very cool pads that glow when you least expect them to and provide a stream of useful data about other valuable and exciting procedures, including the colonoscopy. Surgeons usually give post-op CVT patients mean looks and insult them repeatedly which, if the procedure is successful, makes no difference.