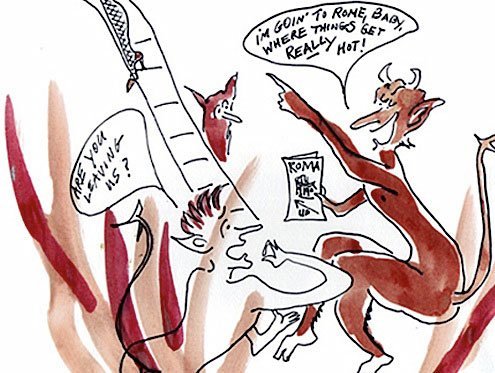 I diavoli che nun se troveno a l'inferno, sono a Roma. ("The devils that are not in Hell are in Rome.")
A

s befits a metropolis that has seen more than its share of human life, Rome has enough proverbs to fill an encyclopedia. Even the English proverb “All roads lead to Rome” is, not surprisingly, of Roman origin. Tutte le strade porteno a Roma, goes the saying in Romanesco, or “Romano Proper,” the city’s mellifluous dialect whose roots are in Vulgar Latin.

Proverbially, Rome never tires of itself. The 19th-century poet Giuseppe Gioachino Belli not only wrote hundreds of sonnets in Romanesco, but suggested brashly and happily that he could go on forever, so rich was the stockpile of subjects. Ma nun c’è lingua come la romana/Pe dì una cosa co ttanto divario/ Che ppare un magazzino de dogana. (roughly: “There’s no language like Roman/such a diverse thing/it could be a customs house.”)

Rome is also self-important (as is London, but it took Dr. Ben Johnson, a Midlander, to coin the famous “He who is tired of London is tired of the world.”)

The city has rules. It’s not a good idea, for example, to lavish too much love on Naples — not while you’re in Rome.

But it is the depth and variety of proverbs that astonishes. Here is a small sampling:

As the seat of Roman Catholicism, God and heaven crop up regularly. For the pilgrim there’s Chi ppija l’indurgenza a San Giovanni, va in paradiso co’ tutti panni. (“Those granted an indulgence at the Saint John’s Basilica enter Paradise fully clothed.”)

In tribute to clear skies and lofty basilicas, you might hear, Roma non è fatta di tera, ma de celo. (“Rome is made not of earth, but of heaven.”)

As a footnote to “Roman Holiday” or la dolce vita, there’s Roma è la porta de l’innamorati. (“Rome is the door to lovers.”)

“Campanilismo,” the fanatical attachment to one’s place of birth, applies to city neighborhoods, as in Er core de Rroma sse chiama Tristevere — “The heart of Rome is called Trastevere.” The people living behind Via Cavour might disagree.

Not all proverbs are self-congratulatory.

To prevent hubris, there’s Se more pure a Roma (“Your also die in Rome”) and Li romani parleno male, ma pensono bene — something like “Romans might often be foul-mouthed, but their heads are screwed on.”

Romans have their own character types. There’s the bullo romano or “bully-boy,” whose loud diphthongs (and sometimes tripthongs) resonate in the side streets around Stazione Termini.

Not so much critical as downright self-condemnatory is Roma è santa, ma er su popolo boja — Rome is sacred but Romans aren’t so well-meaning: boia means executioner. Another way of expressing it might be, Roma è la vigna di coglioni — “Rome is the vineyard of dickheads,” the final word made famous by former Prime Minister Silvio Berlusconi who used it to describe all Italians who refused to vote for him.

The coglione might also be the foreigner who made headlines after paying €900 for a beer at a nightclub off Via Veneto. That proved that Ogni agnello ar macello. (“For every lamb there is a slaughterer.”) If only he had heeded the proverb: C’è chi te dà er bon bere per portare in barchette. (“There are those who offer you good libation for evil purposes.”) More literally, “to set you adrift.” The sucker is also mocked in, Un cojone che viè, le paga tutte. (“Sooner or later a sucker always comes along who’ll pay for everybody.”)

Romanesco proverbs tend to observe life from the ground up. Li proverbi ssò tutti approvati, which is to say they’re all time tested. They cast a cold, not to say irreverent, eye on even “the great and the good.”

Satan apparently has a soft spot for Rome. I diavoli che nun se troveno a l’inferno, sono a Roma. (“The devils that are not in Hell are in Rome.”)

The hellish is also not having money, or managing it poorly.

Filthy lucre again figures in Ar monno chi più spenne meno spenne. (“He who spends most spends least.” — or, exorbitance is easy for those who can afford it.)

Money also waxes poetic: Li quattrini so’ come la rena, na soffiata e voleno. (“Cash is like sand; one gust of wind and it has flown.”) Expect no relief in your shopping rounds. Er macellaro ce mette sempre la gionta. (“The butcher rounds off the price in his favor.”)

Poor and homeless? Don’t look for a date. Conte senza cudrini e senza palazzo, è un conte der cazzo. (“A count without cash is … well… not in the running…)

Change of scene as well as cunning play vital roles.

But if you can’t change your “sky” you can play the furbo.

In nome der Padre, der Fio e dde lo Spirito Santo, ho trovo er zomaro inzinente che campo. (“In the name of the Father, Son and Holy Ghost, I have found the innocent donkey who will help me get by.”)

For deception on a rather grander scale there’s Chi nun sa finge, nun sa regna. (“He who can’t pretend can’t govern.”) And for the post-Berlusconi electorate: Fidete der ricco impoverito; nun der povero arrichito. (“Trust the rich man down on his luck, not the poor man who got rich.”)

But cynicism doesn’t rule the day.

As another proverb points out, Tutti l’amichi nun so’ amichi finti. (“Not all friends are false ones.”) For the cheerful pessimist there’s, Chi nun peggiora, migliora. (“What doesn’t get worse, gets better.”)

Then there’s alliteration: Er gobbo vede ogni sempre la gobba de l’antri, ma nun ariesce a trovasse la sua. (“The hunchback who points out the hump of others remains blind to his own.” — in other words, the pot calling the kettle black.)

Proverbs enjoy the sound of their own voice. They play agony aunt or uncle. They approve, challenge, undermine, but never fear calling a spade a spade. Dar pane ar pane e vino ar vino. (“To give bread unto bread, wine unto wine.”)

Until the Coliseum tumbles, Caput Mundi will be holding a conversation with itself. After all, Rroma è Rroma.