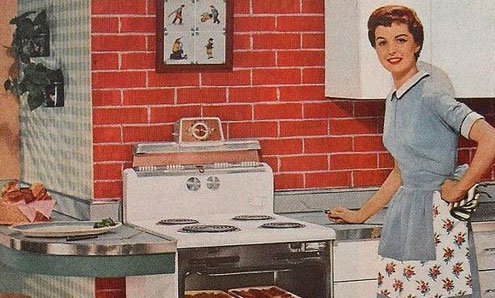 She's not fretting over eggs... yet.
M

y art collector cousin Randy called to tell me he’d bought a new painting called “Woman Frets Over Eggs.” Randy is an art nut but he’s also a pretty good cook, so I thought, “Perfect. A painting he can hang in the kitchen!”

In my mind, the painting showed a 1960s housewife staring at a pan with a smile on her face deciding whether to scramble or (what the hell) poach. She’d be wearing an apron and a Norman Rockwell-style smile. I also imagined a dog (call him Rover) pawing at the door.

“Great!” I told Randy on the phone. “So I guess that one goes over the coffee table.”

Long pause. Since Randy likes long pauses (pregnant, he calls them), I wasn’t surprised. Randy’s a thoughtful guy. He has a cat named Aris (as is Aristophanes) and a wife named Belinda. He named the cat with an “A” to avoid offending Belinda who insisted none of their pets could have a name that started with the first letter of her own. These things happen in California.

Um, okay, I said, but what, feminist concerns aside, was “deep” about a painting of a housewife fretting over eggs in a painting?

Randy sighed his familiar exasperated sigh. It’s an all-knowing sigh that makes the recipient aware they don’t know enough, or even close to enough.

I rarely think straight but today felt like an above average day in my world, and I told him so.

“Okay, so why would I put that painting in the kitchen?”

This time I was the one that paused. I needed to prepare my painting-location strategy.

“Well, Randy, seems to me fretting over eggs is the kind of painting you and Belinda might like in the kitchen.” I didn’t mention Aristophanes since I always mispronounce him.

That’s is when things really took a turn for the worse.

“Joey,” said Randy. “These aren’t those kind of eggs.”

Okay, I thought, not scrambled, not poached, maybe hard-boiled, or maybe the stove doesn’t even work, or the power’s out, or the egg lady is having an affair with the Norman Rockwell-styled milkman, which is why she’s fretting over eggs.

But I didn’t get it.

Randy’s third sigh was the charm. He decided to tell me.

“Woman Frets Over Eggs” is a painting by a 13-sylabble San Francisco artist who specializes in portraits of women facing “‘vicissitudinal’ life changes.” This particular “vicissitudinal” change is fretting she’ll never have a child because she didn’t freeze her eggs and now doesn’t have any eggs with which to make little humans, hold the toast.

I decided I’d stay away from both his kitchen and living room for a while. I’ve never really understood deep moping. His next purchase is likely to be titled “Pregnant, Paused,” and I wouldn’t even want to guess how that woman is feeling.