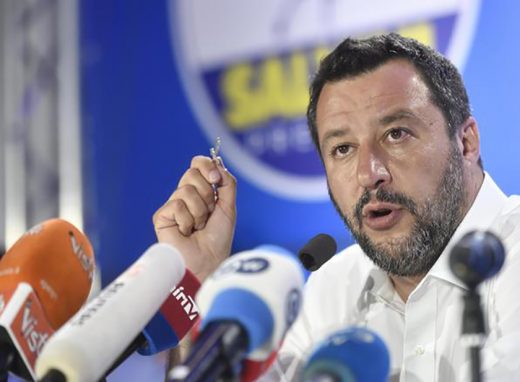 hen one insurgency hitch falters, hitch a ride with another. A mid-route transfer of this kind appears to be taking place in Italy, at least based on European Parliament election results that saw 2017’s Vox pop darlings, the Five Star Movement (M5S), face off against its increasingly popular and ever more rambunctious governing partner, the Northern League.

The League’s command performance (32% to the MSS’s 14) all but turned 2017’s national tally and positioned the League a step from the national primary its charismatic leader Matteo Salvini can now bid for at any time by opting out of the year-old MS5-League governing pact and pushing for early elections.

It’s an unexpectedly rosy moment for a 25-year-old hard right movement that once demanded the north’s secession from Italy in favor of an independent, ethnically “pure” state called Padania.

These days, the difference between the two insurgencies can be summed up in the person of Salvini, a one-man fight club gifted in the 21st-century art of all-platforms self-promotion.

The bearded if baby-faced Salvini has risen above his peers by acquiring swift and remarkable fluency in the language of outrage, whether aimed at the sullying scourge of immigration or the wicked machinations of the European — to him Berlin — Union. Salvini’s relentless media presence has helped catapult the League into a leadership role that would have been unimaginable even a decade ago, about the time the brash, digital-age M5S began its run by winning power-to-the-people clicks on its site, and later to online voting. Then led by abrasive comedian Beppe Grillo, the Movement promised to tear down Italy’s ruling class and replace it with web-elected figures.

Italians are “the greatest sellers of quack remedies on earth,” remarked Indro Montanelli in 1977, and the selling persists.

But Grillo is now long gone, strategically replaced by the more poetic, and dapper, Luigi Di Maio, who has proved unable to keep up with his casual-look counterpart.

In less than a year, Salvini, who is now the country’s interior minister, has run riot by bowing from Brillo’s shock-and-awe tactics. For the M5S it’s bitter irony.

In a nutshell, Salvini has begun the M5S’s digital devotes at their own grassroots game. But Salvini has also shown enough to understand the flashy side of politics. He’s a child-hugging crowd pleaser who can both rant and talk soccer, something Di Maio can’t match.

This matters in a country that likes larger-than-life figures and has spent nearly two decades married to the mob in guise of ever-smiling Silvio Berlusconi.

Though Berlusconi was a northerner, he worked the center and south well, cooking up all manner of conspiracy theories, and it paid dividends. Salvini has done much the same.

This bond with Italy’s hinterlands helped put all alleged crimes and misdemeanors on hold. ‘Love me as I am,’ he said with demagogue flair — and man did they love him. Many of those same voters are coming to at least like Salvini, who has also tapped into disaffected youth.

Italy was and remains a playground for personality-driven populists who care less about policy than creating and nurturing legend status.

So, if you’re looking for an heir to Berlusconi, minus under-aged prostitutes, Salvini is your man. Like Berlusconi, he’s a son of the north who has made inroads in the deep south and Sicily. If Berlusconi’s bogey man was communism, Salvini’s is the EU. Both aren’t shy with racist slurs, though Salvini’s is more practiced at them.

In the way that it mixes opportunity and luck, Salvini’s rise bears distant comparison to that of Bettino Craxi, another baby-faced politician who in the early 1980s stole the limelight from the Italian Communist Party and the ruling Christian Democrats, at the time both bereft of winning face. Craxi, an early version of soon-in-vogue “new” Socialists, parlayed disaffection with the top two into a lengthy stint as prime minister.

In a nutshell, Matteo Salvini has begun the M5S’s digital devotes at their own grassroots game.

At the time, he was considered a hip maverick with big ideas. But less than 10 years after his breakthrough, he was exposed as an embezzling opportunist at least as corrupt as his ruling class predecessors, his progressive tendencies merely concealing an old-school penchant for graft. Disgraced, he would die in Tunisian exile.

Yet for a long while, the pro-Palestinian Craxi was Italy’s best “it” man, just as Berlusconi was later. On the left the Democratic Party’s Matteo Renzi briefly attained that status, which he has since inherited, albeit in an upside down, Donald Trump sort of way.

The M5S, meanwhile, lost its way as soon as it entered the mainstream, something it had for years vowed never to do. Salvini, rewarded with a powerful ministry, took it from there.

But this dance of personalities has done little to improve change-resistant Italy’s social and economic health, which remains no better than poor by most international yardsticks. Its northern economic churn is still offset by a dead-end south no one has much interest in fixing.

Salvini is unlikely to prove anyone’s savior, nor will his EU-bashing lead to an exit since underneath all rancor Italy’s ties to Europe are deeper than either combative Britain or desperate Greece.

Politically, it’s worth noting that the last time the Northern League disembarked in Rome, as a 1990s ally of Berlusconi, it soon resorted to Craxi-like methods. Its first leader, Umberto Bossi, landed the party in the muck from which Salvini later rescued it. But that sour history remains, as does its stink.

Referring to the scent of prewar fascism and postwar communism, journalist and historian Indro Montanelli once referred to Italians as “poisoners.” Politically, they were, he said, “the greatest sellers of quack remedies on earth.” The worst of it, he added, was that all the rhetoric was in bad faith, “without our believing a word we say.”

Salvini’s Northern League would seem ripe to absorb such toxins — if only its leader hadn’t long ago taken quack remedies to heart, making him the perfect poisoner—not a believer but an impassioned seller eager to supply the feel-good outrage Italy and the West absorb like a fearful child depends on anxiety for purpose.