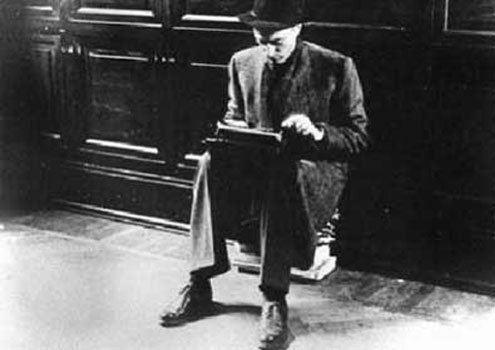 n early autumn 1977 I traveled to Milan to interview Indro Montanelli, the historian and journalist who at the time edited the conservative newspaper, “Il Giornale,” known at the start as “Il Giornale Nuovo,” the “new paper.” Several months before my trip, Montanelli been ambushed” nd shot four times in the legs — from behind, “What could be more degrading!” — by a Red Brigades commando team.

Montanelli had assembled “Il Giornale in” 1974 after being expelled from his warhorse, “Corriere della Sera,” whose leadership he criticized for its increasingly leftward tilt. He was also wary of the introduction of a well-funded intellectual tabloid known as “La Repubblica,” which began publishing in 1976 in Rome and met with immediate success. His calibrated conservative prose turned uncharacteristically shrill. Montanelli, a gangly Florentine, was absurdly labeled a Fascist by critics and soon become a terrorist target.

Though interest in his celebrity shooting briefly relieved his fledgling newspaper’s ongoing financial misfortunes, it would ultimately require outside help. That help came in part from a little-known Milan housing developer named Silvio Berlusconi, a man Montanelli never liked. Berlusconi bought 12 percent of the paper in 1977, increasing his stake to 30 percent and majority ownership in 1979.

Though tussles between Montanelli and Berlusconi would later reach legendary proportions and lead to Montanelli’s resignation in 1994, Berlusconi at the time was hardly more than a blip on the political and cultural radar screen.

The first was his remark before the seminal 1976 Italian elections, which saw the Communist Party poised on the brink of power. “Hold your nose and vote DC,” he wrote, meaning the Christian Democratic Party, which narrowly prevailed. Conservative “New York Times” columnist William Safire borrowed the line in 1992, applying it to the U.S. presidential race and Democrat Bill Clinton.

The second was a photo taken immediately after Montanelli was shot in June 1977. He’s on a gurney smoking a cigarette that seemed far more important than his IV bag.

The third arose from the interview itself. He appeared rail-thin, as always, and dressed in billowy white pantaloons conspicuously stained where the bandaged wounds let blood seep through.

The interview focused on the collapse of the center in Italian politics, the role of media, the country’s ongoing economic recession, and the importance ideology, whether Communist or otherwise, in what seemed to me a self-involved and anarchic nation.

Montanelli gave me an earful. But the last quarter hour soared to that rare, pure place between screed and total lucidity. Readers can file this excerpt under the annals of plus ça change, plus c’est la même chose. Or they can read it, particularly his references to bad faith and cleverness, and weep.

Do you foresee a future for the moderate right in Italy?Why call it the right? You’re falling into the Italian trap, which distorts all ideology. A political blueprint should be composed of three parts: a right, a center, and a left. In Italy the center has been abolished. Whoever isn’t on the left is a rightist and whoever is on the right is a Fascist. It’s madness!

Well, then, can the center be recreated?

It must be. If you kill the center and divide the political spectrum into left and right, all that’s left is a head-on collision. It’s the center that ensures the democratic equilibrium in all democratic countries.

What role has the Italian press played in the current crisis?

The Italian press is the real culprit for what is happening in this country today. For the last 30 years, it has practiced nothing but hatred. When certain newspapers and magazines spend years categorizing me as a Fascist, it’s no wonder you’ll find the madman who will shoot me down as one.

Is the rest of the world paying enough attention to events in Italy?

No. Listen. I know that Italy is at best a disturbance to NATO. It is the unreliable partner, the ally you can never trust. But mark my words: If we pass over to the Warsaw Pact we will become the foulest center of political and moral pollution in all of Europe! We are bad soldiers and bad citizens, but as poisoners we have no rivals in the entire world. We succeeded in making a world event out of something as stupid and vapid as fascism. We are the greatest sellers of quack remedies on earth. In our hands, communism will sell better than it ever did before. And the remarkable thing about it is that all the selling will be done in bad faith, without our believing a word we say.

Even under a Communist regime the Italian temperament wouldn’t change?

Absolutely not. Nothing and no one will force Italians to believe in anything but their own individual cleverness.

But beneath the entire political manipulation do you sense a deepening malaise among Italians?

Yes, there is malaise. But Italians are extremely good at living day by day with almost anything: malaise, inflation, even fear. It suffices that each person closes himself within his own small world and its preoccupations — a world where malaise soon becomes normalcy.

In one of his final interviews, with the Italian magazine Oggi, Montanelli labeled democracy “by its very nature a triumph of mediocrity.” He died in Milan in July 2001 at age 92.