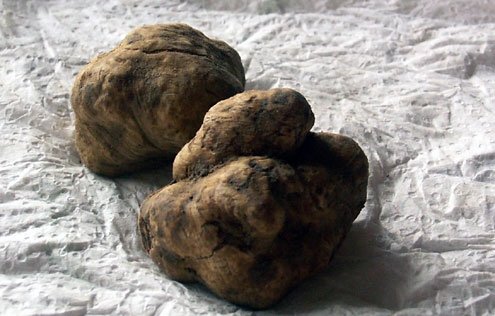 Cooking with the white truffle is an exercise in care and reverence.
T

he earth yields some of her greatest treasures just before the cold comes and everything appears to die. First come the grapes, swollen and sweet before the first frost. Then the leaves turn red and gold, a burst of light before they fall and leave the trees barren and skeletal seeming. Autumn is also truffle season.

White truffles in particular are prized as one of the most precious raw ingredients in the world. Their aroma is distinctive-a combination of musk and garlic, with an instantly stimulating saltiness. The flavor is more delicate garlic without any sharp aftertaste. Cook with them and a roasted garlic note emerges.

In mid-late fall the tuberous fungi, which grow up symbiotically among the roots of trees predominately around the town of Alba in Piedmont, Italy, are harvested with the use of specially trained dogs, and retails at around $350 an ounce in New York City. Truffle hunters traditionally used female pigs to sniff out the aromatic little clusters from underground.

The scent profile resembles the hormone compound androstenol, a hormone found in boar saliva to which the sows are innately attracted. The only problem with this practice as that upon the discovery of the truffles, the sows tended to eat them, which defeated the process…. but can you blame them?

Androstenol is also found in trace quantities in human sweat glands, which accounts for the characteristic musky odor associated with the truffles. Musk as a perfume note has been revered for centuries. Essentially an extract from the glands of certain animals — most notably the musk deer — the fragrance is prized among the perfume industry for its power to induce primal sexual attraction. The Sanskrit word muská, translates literally to testicle. There’s no way around it. This is the scent of sex, and like it or not, once you’ve had a taste, it becomes a bit of an addiction.

City life is all about addiction, both business and pleasure, So this fall, we rented a country house in upstate Connecticut to get a last look at the leaves, relax and rejuvenate our bodies, and warm our souls with fine wine and food in preparation for the New York City winter. Like a pack of diligent squirrels, we scavenged the local markets, horded cases of wine, and then sat down to feast in front of the fireplace.

We’d purchased a bottle of white truffle-infused grape seed oil, which isn’t a bad substitute for the real thing. Many labels utilize a chemically produced truffle flavoring that is so close to authentic and much less costly, that plenty of chefs will happily substitute. We found a bottle with real white truffle extract plus “aroma” for $13.

Cooking with the white truffle is an exercise in care and reverence. While the aroma is potent on its own, it’s easily masked with heavy sauces or big wines. While there are myriad recipes truffle recipes involving game meat, pasta or rice work as a more perfect pedestal. Eggs too, with their succulent consistency, and liposome-rich (read: fatty) consistency, are a perfect vehicle to deliver, yet not diminish, the white truffle’s essence.

In fact, truffled eggs, basically scrambled eggs with grated black or white truffle, are a simple way to enjoy the elegant tuber. Try them on a piece of lightly grilled toast.

We opted for pasta, and made a variant of carbonara, minus the pancetta, plus several teaspoons of truffle oil, and a little cream. Whipped egg yolks, cream, and truffle oil tossed over hot, just-strained pasta and cook on contact and coats every square millimeter of the fresh fettuccine. A dash of sea salt, black pepper, and a sprinkle of finely diced parsley drew out the truffle flavor and added freshness.

We ate until we could eat no more, and the scent of white truffle hung in the air as we splayed out our bodies out in spent satisfaction. Outside the last leaves fluttered and fell to the ground. We returned to the city with the first flurries of winter.

Although tartufo bianco and the Nebbiolo grape (the variety used exclusively in Barolo, Barbaresco, and several blends in the region) are Piedmont’s most precious commodities, unlike other traditional regional food and wine relationships, they don’t always complement one another.

In fact, one of the greatest pairing mistakes is to match a bold Barolo with a delicate white truffle dish. Regional cuisine purists might not agree with me, but I prefer to make the white truffle as the centerpiece of the meal, to build a dish around it, and serve a wine that compliments and accompanies it, rather than one that vies with it for intensity and persistence of flavor.

Local white varieties such as Roero Arneis, a grape indigenous to Piedmont’s Langhe zone works nicely, as does a smooth Pinot Noir. Interestingly enough, Piedmont is often compared to France’s Burgundy region in terms of climate and quality of wine production. We drank a graceful Louis Jadot Chateau des Jacques Moulin-a-Vent 2005. It was fruity and floral, with a light mouth feel and just enough acidity to skim any excessive oil from the palate to keep this very rich dish from overwhelming.