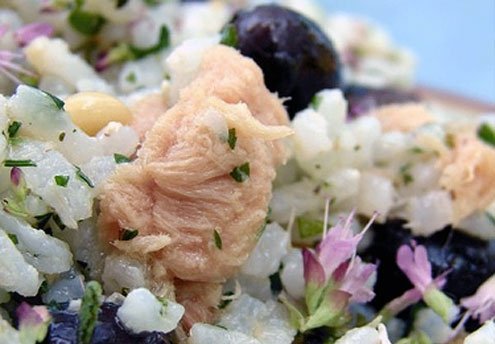 Insalata di riso should be simple and perfectly balanced.
W

hen I finally touched down at 9 p.m. from Rome, after nearly 20 hours of travel, I was met with the muggy New York City that everyone had been talking about. I hadn’t believed a word, certain that un-air conditioned Italian summers were worse.

One week later I stood corrected. Unpacking boxes in my Brooklyn apartment, I noticed two things: One, I wasn’t homesick. The walking, the sweating, the small stores, the neighbors saying hello, the irresponsible dog walkers, the scent of wild flowers and a polluted canal… it was enough to pilot my thoughts straight back to Italy — plus they were making their own mozzarella on Court street, what more do you want?

Two, it was hot. Hotter than I’d ever felt in Rome. Was this because of contrasts? Occasionally I would set foot in an air conditioned market or office which made the exit into the 90-plus heat advisory all the more excruciating. All I know is that eating indoors was next to impossible.

I’d spent my last months in Europe romping around the beach with beer and devouring spaghetti with clams in aluminum cartons with a famine that comes from salty sea air. I picnicked by the Canal St. Martin in Paris with a wheat berry salad, baguettes, cheese, and fresh fruit. My last supper in Rome included raw oysters on ice and pasta with fresh tuna and tomatoes at a table outside at 11 p.m.

As it happens, there’s quite a picnic sensibility in Brooklyn, and with all of the green space and produce markets around, I’ve managed to put together several spreads, all inspired my years of outdoor dining in Rome and abroad. If you can wriggle your way around the open container laws, or find a dark and shadowed spot in the shade of an old oak tree, it almost feels like Europe, or at least a distant cousin.

As with so much of my European cooking experience, part of the joy is in the preparation. The novelty of selecting fruit and vegetables from one shop (sometimes the owner throws in some free basil because it’s the last bunch and it’s starting to wither), hunting down the best bread (even if it takes a little longer), and staying in the cheese shop until your nostrils go numb, never wore off.

Then there’s the beautiful clutter of making everything fit inside the picnic bag or basket — mismatched plastic boxes, flatware rolled into napkins and shoved in paper cups that are likewise shoved into zip-lock bags. And then the idyllic picture of it all spilled out onto the picnic blanket, surrounded by bare calves, and accompanied by the clatter of plates and flatware, the pouring of wine into plastic cups, and laughter.

The most perfect picnic food, one that I will always associate with summer and outdoor dining, has been sadly underestimated among connoisseurs of Mediterranean cuisine: the rice salad, insalata di riso. Sadly, and perhaps the reason it has yet to revel with the grand risotto recipes, is that to many families it’s as simple as a jar of giardiniera and some overcooked rice. It’s true, not every Italian knows how to cook. I’ve held my American tongue on a number of occasions when boyfriends or friend’s mothers under-drained the pasta, or failed to toss it with the sauce over a live flame to properly amalgamate. I knew there would be a watery residue on my plate (which they would sop up scarpetta-style, and expect me to do the same), or drenched my salad in so much oil and salt that it may as well have been deep fried.

And yet rice salad done right is the most glorious meeting of hot and cold. When served tepid on a summer day it is both refreshing and substantial. I was greeted in Sardinia with a bowl of it made fresh that morning that included dark ventresca (tuna belly), olives, tomato, and a little sweet corn for crunch and contrast. It was dressed in olive oil and a little salt. Simple. Perfectly balanced.

These salads work with anything — rice, barley, farro, wheat berries. The idea is to create a harmonious blend of smooth and crunchy, cooked and raw, sweet and salty. Sauté some garlic, bell peppers and mushrooms, toss with cooked barley and raw chopped spinach. Some recipes work well with cheese, mozzarella mostly. Try tuna (once again, ventresca is ideal), fresh tomatoes, and mozzarella tossed with rice. Dress with olive oil and salt. The unique appeal of a rice or grain salad is the flavor of cooked grain with crisp, raw ingredients.

When it’s hot outside, a hot dish — no matter how delicious — is a bit torturous. Unfortunately we cannot subsist on ice cream and watermelon alone. This is where the grain salad comes into play. Try cucumbers and fresh apricots. Walnuts, strawberries, spinach, and chopped, hard-boiled egg. The options are endless, and it’s a great way to clean out the refrigerator. Anything you would put in a pasta you can most likely use for a grain salad, just be sure to garnish heavily with something fresh like parsley or basil.

Prepare the barley according the instructions. This may involve soaking. In a saucepan, heat three tablespoons of olive oil, the garlic cloves (whole) and a dash of pepper flakes. When the garlic is golden, add the clams. Cover for a few minutes until they begin to open*.

Add the wine and raise the heat to let most of it cook off. Drain the barley well and combine with the clams and the remaining sauce. Add the parsley and the tomatoes. Add salt, peperoncino, and oil to taste.

* You may also steam open the clams before sautéing them with the oil and wine by heating them with a little water over a low flame and covering. Cool and remove from the shells and proceed.

Boil the rice until it is al dente. Rinse under tepid water and set aside to drain. Combine the other ingredients, combine with rice and add olive oil and salt to taste.

Farro Salad with Apricots and Cucumber: Ingredients for 4

Cook the farro as directed (this may involve soaking). Drain it and set aside. Combine the soy sauce, oils, and lime juice, and honey and whisk until well blended. Add the cucumbers and apricots to the farro. Dress with the sauce and garnish with the sesame seeds.

Look for something small and white, clean and bright. No big wines here. At most, a rosé, but keep it simple and smooth. You can’t have too much acidity clashing with raw vegetables, or the lingering metallic notes of canned tuna. My latest picnic pics are: