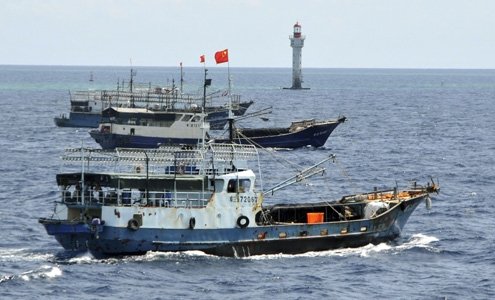 oodbye fish and chips? It’s still too early to sound the alarm but humanity is facing a rapid depletion in fish stocks, a real problem that could escalate into crisis proportions if entire species begin disappearing. A recent New York Times article sounded the latest alarm. Indiscriminate over-fishing has diminished catches and some popular species are becoming increasingly hard find.

Specialists at the UN Food and Agricultural Organization (FAO) and in governments and universities have long discussed the problem of vanishing fish, but the public remains only dimly aware of the issues. Only the ever-rising cost of fish in supermarkets has caught the attention of shoppers.

In 2012, FAO estimated the world catch at some 85 million metric tons, six times higher than 1950s averages. The global value of fish sales was estimated at around $180 billion, roughly 15-to-18 percent of total food consumption.

And yet, notwithstanding the enormous growth of high seas fishing fleets, particularly in Asia, the catch has declined 10-to15 percent over the last few years. The drop-off, due to stock depletion, will only increase and may portend dire consequences.

The fishing industry has made enormous technological progress in the postwar years. Borrowing from the military, fishing fleets use sonar and satellite communications. Special nylon nets covering several square miles are used to drag the seabed. High seas fishing fleets have expanded exponentially in Japan, South Korea and China (the three account for more than 50 percent of the worldwide fishing fleet). Fishing in international waters has all but taken the place of coastal trawling. Today, Asian fishing fleets operate in the Indian Ocean, the South Atlantic and even the Mediterranean. They will probably soon be joined by Indian and Arab high seas fishing fleets. But technology exacts a price. Competition and the need to repay heavy investments have made aggressive fishing practices essential.

Over-fishing in distant waters has also generated political problems. China’s tension-producing decision to extend its control of the South China Sea to tiny uninhabited islets and atolls is directly tied to the need to guarantee adequate fish supplies to the Chinese market, the biggest in the world. The same applies to lingering contrasts between Argentina and Britain over the Falklands (Malvinas), where the underlying cause of the 1982 conflict was the desire by both states to fish rich Antarctic waters. Off east Africa, assertive international fishing has destroyed the traditional vocations of Somalis and Yemenites, inducing many former fishermen to become pirates. The same is true in the Indian Ocean Moluccas.

Fishing has always played an important if often overlooked role in international relations. Cod fishing off Canadian waters led to a 1990s dispute between England and France that was only solved after long negotiations. The issue is now moot, since cod have mostly abandoned outer banks. The same applies to the Dogger Banks in the North Sea, for centuries a bone of contention between Great Britain, France and Holland, and to Icelandic offshore waters, recently closed by that country. In the 1970s, Norway held out from joining the then-European Economic Union for fear of losing the control of cod fishing in the Arctic — cod is a Norwegian staple — to Spanish and Portuguese competitors.

Along with cod, tuna and swordfish are now at risk — though the latter two remain in great demand in Japan, where prices for these delicacies are well above those accepted in the West (tuna and swordfish have been traditionally fished by Europeans in the Mediterranean and Southern Atlantic). Both tuna and swordfish stocks have fallen by more than 60 percent over the last two decades. In Sicily, where tuna was caught during its yearly migration, canneries lie abandoned. In Northern France, cod treatment plants have been transformed into museums.

The peril is widespread. Asian over-fishing has made shark increasingly hard to find. Prices for shark fins, a major delicacy in China and other Asian countries, have risen some 70 percent in recent years and now cost approximately $50-60 per pound of fin. Sole has all but disappeared from Normandy. Shrimp is at risk in North Africa.

The sharp rises in retail prices has only redoubled fishing efforts, which the complete absence of international agreements and accepted rules makes possible. In short, the fishing industry is a brutal, greedy and unregulated exploiter of natural resources. Endangered species mean nothing to it.

But the real responsibility lies with governments that have been unable if not uninterested in forging regulatory agreements. Most Western leadership has limited itself to creating no-fishing zones, which however successful cover only some 3.5 percent of the ocean’s total surface areas — much of it in the Mediterranean and the North Sea.

The real long-term risk — and defining long term is difficult (in years? decades?) — was spelled out in American journalist Elizabeth Kolbert’s recent book “The Sixth Extinction: An Unnatural History,” which won a 2015 Pulitzer Prize. Species may decline, but when their ecological niches are endangered, the decline turns precipitous and new species flourish to fill the void. Jellyfish, for example, are flooding the over-fishing niche and rapidly multiplying worldwide.

The destruction of the ecological niches that keep our table fish alive could eliminate one of our basic food sources, with consequences that are difficult to fathom.

And jellyfish, though some are somewhat comestible, are not going to fill that gap.