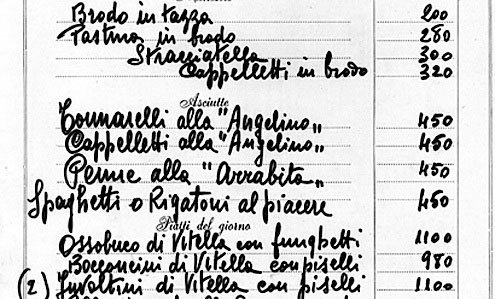 ome time ago the Rome daily Il Messaggero reported there were some 60,000 Italian restaurants worldwide. Western Europe boasted an impressive 35,000, North America 15,500, Australia 1,500, Latin America 7,500, Eastern Europe 3,800, Africa 1,000, and the Middle East 500. What customers might expect inside was, to say the least, less cheering. From a culinary point of view, the newspaper said, “Italian” menus often concealed “indescribable horrors and hybrids to make one despair.”

To paraphrase poet Robert Frost, the original dish often got lost in translation. “Spaghetti for export,” sniffed Il Messaggero, with many of the original flavors gone missing.

This piece is offered as a something of a corrective. Drawing from the menus of restaurants around Rome’s Stazione Termini, it also tries to provide a rough linguistic guide to help diners (in Italy or elsewhere) distinguish the original from the hybrid.

Rough, however, remains the operative word. Rome menus are delightfully long, a feast not only for the gourmet (in Italian buongustaio) but also for the linguist hungry for etymological and lexical morsels, and wary of “false friends.”

You have a choice between prosciutto crudo — meaning, perfectly respectably, raw air-dried ham — and Prosciutto di Parma. The latter is a delicacy so valuable that it’s sometimes set aside untouched and passed down as a family heirloom. In summer, it can be served with melone, honeydew melon. (Watermerlon is cocomero or anguria, which is passed around after the main meal, not before.)

If ham or fruit are not to your taste, you can try bruschetta, toasted bread garnished with garlic. Other tidbits or sfizi (literally whim or fancy) include mozzarella, made from buffalo milk and best taken when dripping fresh. The name comes from mozzare, to cut, since long strands of cheese are sliced after they’ve curdled.

Now for the second course, or primo piatto. Naturally, we find spaghetti (literally small strings or twine), even if in Rome it’s rare to find it alla bolognese, with meatballs (polpettine). More common is spaghetti all’amatriciana, after the nearby market town of Amatrice. The dish consists of pig’s cheek (smoked pig feet) and a robust peppery sauce.

Then there’s the ubiquitous spaghetti alla carbonara. One notion suggests the name derives from the sprinkling of coal-black pepper on the pasta; another that the dish is connected to Giuseppe Mazzini’s sect, the Carbonari. The Turin newspaper La Stampa traces the name instead to the carbonai, charcoal burners who took the noodles with them into the mountains as sustenance and cooked them as fillingly as they could, usually with eggs, bacon and cheese.

To leave room for the so-called main course, you might do as many Romans do and consider a mezza porzione, a half-portion. Buyer beware, though, since this request is more readily honored in a place where you are a familiar customer.

Also on the menu might be tube-like rigatoni, from rigato meaning “fluted” like a gun-barrel which they happen to resemble. Cannelloni (literally a large pipe or stalk) are similarly tube-like, but considerably larger and stuffed with seasoned meat. Completely different in shape are tagliatelle, again involving the thoroughly culinary verb tagliare — to cut. This Oxford English Dictionary gives a nice picture: “That sentence wound up on the cutting-room floor, another piece of indelible Grundig tagliatelle.” A winding cousin is fettucine, literally small ribbons.

Also of note are pappardelle, an extra thick pasta to accompany the strong tasting cinghiale, or wild boar, whose hook-tusked forerunners still inhabit woods in Lazio, Tuscany, and Umbria.

For lovers of spice, there are penne all’arrabbiata, arrabbiata usually meaning angry but here signifying the peppery red tomato paste with which the penne come. The dish could be translated literally as “angry feathers.” Gnocchi, from nocchio, a knot of wood, are small dumplings made of flour, semolina or potato.

One smallish pasta is uniquely called strozzapreti (literally priest-strangler) in references to some of the clergy’s penchant for indulging the high life. Polenta, cornmeal, is another basic starch dish. Elizabethan translator John Florio, half-Italian and a friend to Shakespeare, explained polenta as “made of barlie or chesnut soaked in water, and then fride in oyle or butter.”

On to the secondi piatti, really the third course. If it’s a T-bone steak you seek, it might come disguised under the name lombata di vitello (veal, not beef). Braciola is, in fact, a chop, the name deriving from the “brace” or embers on which it was once cooked. Spezzatino is veal stew, or veal in little pieces; straccetti the same in strips. Osso buco is hollow-boned ox-tail while salsicce are deliciously spicy sausages. Then, there is the cotoletta (veal or beef cutlet), scaloppina (always veal) and trippa (entrails). Saltimbocca is a bit more ambitious, being veal or vitello wrapped in ham, so appetizing that it “leaps into your mouth.” Abbacchio is a suckling lamb, the kind that was one grilled on a skewer — hence, ad un bachio. Manzo, simply, is beef.

Also Roman is coratella, a meaty mish-mash of heart, lungs, spleen, and other innards served up with onions to enhance (or conceal) the taste. Vegetarians might try grilled white cheese, scamorza, though it can also be served with ham.

Orata is the slender and silvery sea-bream.

Razza is not a ray but a skate.

Seppia is squid, sepia the color of the self-produced sauce in which it is often served.

Acciughe are anchovies, whether a couple topping a pizza, or in sufficient numbers a whole dish in itself.

Cefalo is grey mullet, and triglia, the red one.

Stoccafisso is, via the Norwegian, stockfish or, in Italian slang, a very thin person or the English beanpole. To not cut a poor figure, note that salmone in Italian is pronounced with the “l” intact.

Often eaten with pasta and sometimes in soups, the main shellfish dishes are cozze — or mussels (vongole) — small clams, and ostriche, not ostriches (as I once translated to my embarrassment) but oysters, a linguistic false friend.

On to dolci e dolcetti: Zuppa inglese turns out to be trifle, while macedonia is a fruit salad named for ancient Greek ties. Tiramisú — literally pick me up — is the same as in English, although in Italy it comes with that final accent and is mostly home-made, often proudly preceded by a possessive “Il nostro.”

The meal consumed, it’s on to liqueurs. There’s limoncello, a lemon based liquid that varies from exquisite to paraffin. You can also try the often surprisingly sweet amaro (the bitterness depends on the brand). Equally sweet is the Tuscan vin santo in which you can dip biscotti, a hard cookie baked for this purpose alone.

For a Sicilian equivalent there is the gold-tinted zebib, Arabic for raisin. The harder-headed might prefer grappa, the name deriving from the fermented grape-stalks and skins, venacce, left over from the grape-crushing. The drink’s fortifying qualities are also well-illustrated by an Oxford entry: “We drew our bombs and our grappa and swirled into the attack.” And then there is sambuca, from sambuco, the word for an elder tree. That taste is from the berries mixed with a strong flavoring of liqorice.

All these drinks can be sipped with or without coffee, which again can take several forms — mentioned here for the neophyte. There’s the obvious espresso, the frothy cappuccino “grey like the robe of a Capucin monk,” caffé americano, caffé latte or the even milkier macchiato — milk stained with coffee.

Buon appetito is best left in the original.