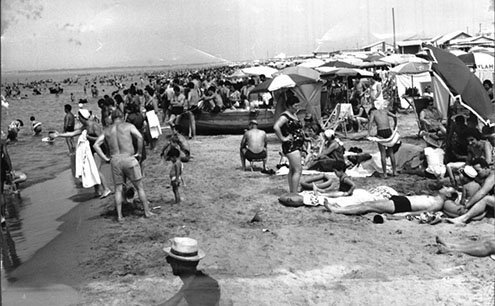 Ostia took off as Rome's principle seaside destination after World War II, though it was originally built up under Mussolini.
W

hen I was a kid in Rome of the 1970s my family often trekked to the summer seaside at Ostia. For my father, the short trip had all the ingredients of a sacred rite. The real family vacation wasn’t until August, but that didn’t stop him from taking time out from work in the dog days of July.

My father never worried that he’d have to go back to work the next day. All he wanted to do was beat the heat, even for an afternoon.

My father prepared such trips as if he were making plans to invade Russia, never mind that Ostia is an hour away. He took command structure seriously. He also liked routine. Since beach traffic was always bad, he’d want us on the road by 7 a.m. Traffic wasn’t the only reason. A key part of his strategy was getting there while he could still scout out the “right” place for our umbrella, usually very close to the sea. That was a fair enough goal since by midmorning the hordes began arriving.

Leaving at 7 meant we’d have to get up an hour before that. In all, the entire process of getting ready took two days. My father didn’t want to leave anything to chance. He also wanted to make sure he had every possible convenience, and that was the family’s job.

Let’s run down the list of my father’s essential needs: A giant beach umbrella; folding chairs and lounge chairs (he had to check the cushions first); a lunch table and chairs; at least six food containers; a portable freezer for water (a little) and wine (a lot) — with arctic temperatures essential; that day’s newspaper; that week’s crossword puzzle magazine; a fishing rod (for what purpose wasn’t clear; this was Ostia, the beach, not a pier); and assorted fatherly things.

There were usually five of us in all, six if you counted my maternal grandmother who never turned down an invitation to spend the afternoon at the beach. We didn’t own a station wagon or an SUV, just a normal car filled with 50 percent family, 40 percent paternal gear and maybe nine percent engine. That left about one percent for other stuff, including maybe toys. With luck we could even fit in a few bathing suits and towels. But we were kids. We didn’t care. We just wanted to go to the beach.

My mother was in charge of the beach feast and she started cooking it a day before. She’d make antipasti, one or two plates of pasta (with clams or maybe lasagna), at least one meat main course (usually something grilled), salad, and our typical family dessert, peaches with white wine. Add a couple of bottles of my father’s own white wine and we had our traveling banquet.

The trip itself was easy, since most Romans just don’t hit the road early. It’s not in their nature. My father knew this. Roads were deserted. We had to keep the windows down no matter what since my mother hated drafts and car air conditioning was still about 20 years away, at least in Italy.

Mom and Dad were so happy to be going to the beach they smoked half-a-pack of cigarettes between them. I was stuck in the back with my brother, sister and a bunch of towels. Our backseat mantra was survival.

We’d get to the “free” beach at Castel Porzio between 7:30 and 8 (“free” matters because most of Ostia is still run by seaside cabana enterprises that rent out whole stretches of beachfront). My father’s planning always worked like a charm. Leaving early meant no traffic, no parking problems, and not a soul on the beach. Nothing could go wrong based on the underlying principle that hell was other people. If you avoided them, you were home free. But forget about other people. I don’t even think the fish were out at that hour.

If you can imagine Tibetan Sherpas on a Himalayan peak you can see us as we made our pilgrimage hauling items from car to beach. Once my father picked out a strategic spot, we’d haul all the goods to the anointed spot. My father, meanwhile, carried the burden of his newspaper.

Next up we waited for the flags, a ritual on most any public beach. Green meant safe, yellow meant pay attention, and red of course meant dangerous waters. About nine out of every 10 times we went the flag was red, even if the sea looked like a pond.

Years later I found out why: no one ever wanted to bother changing the flags. They just left it red to cover for anyone’s mistake. Never mind that parents took it seriously which made for hundreds of glum if not sobbing kids. My father was open to compromise — at least from his perspective. So long as the waves topped out at height of a book he’d let us wade in, though we couldn’t move more than a few feet laterally. Making a hole near the umbrella and filling it with buckets of water was just about the same thing.

Once we’d planted the umbrella and furnished our sandy mini-home, my father would pull a lounge chair and take up all the available shade. I’d run back and forth to the water’s edge with my brother and little sister. Of course, my mother watched us like a hawk. I never saw her wade in, not once. She couldn’t swim. That of course didn’t stop her from dispensing detailed advice on swimming techniques. She’d always be holding the towels, and after we’d spent about 10 minutes in the water she’d start screaming that it was time to come back in. She usually had several explanations, which she alternated: she’d heard there were sharks around (at Ostia?), there was a dangerous undertow, and, our favorite, our skin — horrors — was getting wrinkled. If we didn’t get out we’d stay that way for life.

I honestly think she just got tired of watching us running around and wanted to sit down under the umbrella. Not to mention the fact that my father was hungry.

In fairness, so were we. I mean we’d been exerting ourselves for 10 whole minutes. The problem with eating, and we all knew this, was that once you committed that risk act you couldn’t even think of getting anywhere near water for at least a day.

Why? Well, according to that generation (and the custom persists) you need to sit still for four hours, the time it takes to digest your meal. Anything less disrupts digestion, and it doesn’t matter if you’ve had two cookies or a plate of pasta: digestion is digestion. Ignore it and you take your life into your own hands. Swimming too soon after eating is almost as dangerous as going into an air-conditioning room after sweating. This is skull-and-crossbones, die-on-the-spot stuff.

It also happens to be a myth. Otherwise my American wife and two sons wouldn’t be around to frolic, and they are. But childhood lessons run deep. I may not wait four hours after eating a cookie but I do wait three. In my Ostia-memories mind, five minutes too soon can mean goodbye cruel world.

So in those days we waited. We’d have our slice of pizza and park ourselves under the umbrella for, yes, four hours. That was about the length of my father’s post-lunch nap. But four hours also meant we’d reached the end of our beach day. If we didn’t leave according to the master plan, we’d get stuck in traffic.

These days when we go to the beach I love watching my two sons frolic restriction-free. Now I’m the one under the umbrella with the newspaper. I’m also the one who’s just finished a giant plate of pasta. Now I’m waiting for my four hours to start.

I was recently invited to a wine tasting at the U.S. Embassy. I was surprised that the featured vineyard was one I’d been meaning to visit to for a while. Tenuta di Fiorano is on Rome’s doorstep, the Appia Antica. It’s owned by the Boncompagni-Ludovisi family, which has a longtime noble (and papal) lineage. Tenuta di Fiorano-Fiorano Bianco 2013 (Viognier 50%/Grechetto 50%; Vol. 13.5%; € 25) is a straw-yellow wine, robust and intense. Its aroma ranges from yellow peaches to cocoa, pineapple to almonds, closing with a trace of grass, flintiness, and licorice. To the palate, it’s full-bodied, intense with intriguing traces of Mediterranean minerality. The finish is fresh, acidic, and salty. This is truly fine wine.

Since we’re in summer, and I’ve been writing about the seaside, I’d pair the wine it with fish or grilled oysters, the kind of food my mother never brought to Ostia. Maybe they would have taken a year to digest.