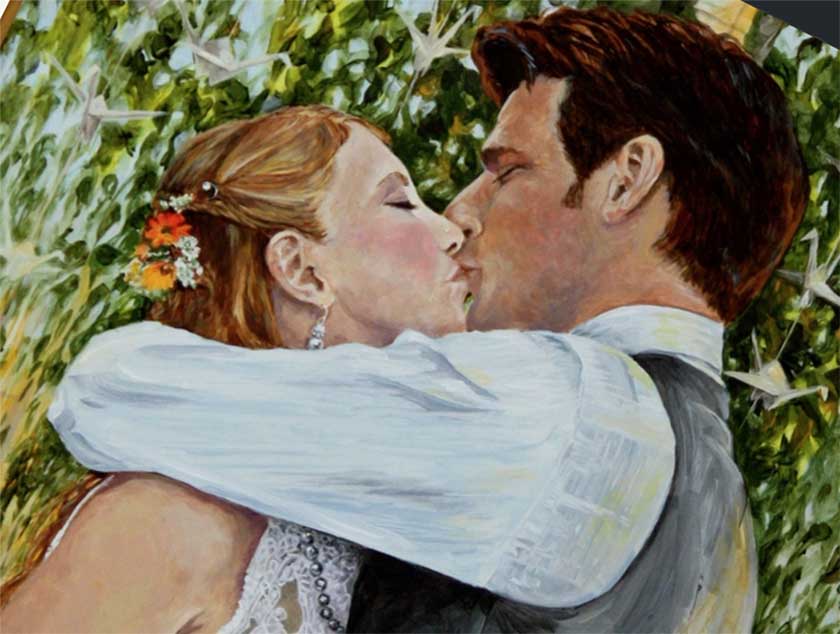 t’s time to take a little break from my regularly scheduled nonsense to tell you a story I find irresistible. I’m doing this notwithstanding just having moved into a flat overlooking Hyde Park, but my escalating rags-to-riches tale will have to wait a moment.

Now then, some of you may remember a year ago, when I was a sobbing, down-on-her luck escort trying to make ends meet in Barcelona. It was there where I met Isabelle, a fiery French redhead I was so taken by I wrote about her at length.

She was to me the embodiment of verve and daring, eccentric with men, her escort work, her jitterbug lifestyle, all this with a bit of French ennui thrown in.

She’s the one who essentially took me in, got me started, gave me courage when courage seemed hard to find, along with money. Our adventures together would make for a book: good men, bad men, dastardly men, with plenty of hotel rooms thrown in.

Amid the chaos of the virus, Isabelle paused long enough to notice Oscar’s cagey pining.

Then, at a certain point, came Oscar, the Chilean photographer (and later roommate) I hired to come take a trillion photos of us both, and others, so we’d become rich and famous. All this of course happened seconds before COVID pounced.

Oscar arrived and was a pure delight. He’d been taking pictures of naked women all his life so a few more in Barcelona didn’t really float his boat. No matter how sexy and sultry and arousing we were, Oscar just asked us to please stop giggling. His photos were a wonder, at least to me. He was art. I could never ever look as beautiful as he made me.

But this Oscar fellow was also decent and nice and funny and easy to play board games with, so much so that we’d all gather round to play. Sex played no role. It was a sort of bystander to our Bohemian life.

Isabelle flitted in and out of this scene, often the focus of Oscar’s lens. He loved the redness of her hair, like a spice that flavored his images. She liked him, but Isabelle was a woman on the move.

Until something very strange and wonderful happened. I don’t know if it happened over a day or a month because it all flew over my head, how I do not know.

Isabelle, the turbine-fueled redhead vamp, got under Oscar’s skin. And amid all the chaos of the virus and the change in all our lives, our work all but coming to a halt, Isabelle paused long enough to notice Oscar’s cagey pining.

This began a tumultuous love affair between French escort and Chilean photographer that, wait for it, will soon culminate in marriage.

Oscar will leave me, and London, behind, to marry now head-over-heels in love Isabelle, and the two will settle in her Barcelona apartment, once the site of photo shoots and board games.

She’s already quit escorting, taking down all her online paraphernalia, and he’s busy packing his bags.

It’s all really happening, and I am over the moon.

The pragmatist in me says, “But what will they live on?”

For Oscar, Isabelle can do no wrong, and that she’s slept with men for a living means minus nothing.

To which Oscar typically says he isn’t worried, they have each other, they’ll start a photo studio, find a loft, he may yet be able to transform her stunning looks into sellable model material. Isabelle, meanwhile, imagines a life beside a man she adores (that’s a first) and wants things to take their natural course, which could mean Oscar in the living room playing guitar until well past midnight.

Of course not. People fall in love daily.

But given where I stood with Isabelle a year ago, and how she pulled me, pouting and sullen, from my room, and the way Oscar came along to cheer us all up, I really, really like this story.

The two escorts who were escorts with boastful websites 12 months ago are now me, a businesswoman who tells all she’s in “marketing” while running her sexting team, Isabelle, about to become a wife (and wanting to). Oscar, who saw the redhead, felt a little and then a lot, and went after her until she couldn’t stand it anymore.

Sure, I want to tell you how my business is thriving so much I can now live like a princess and entertain my parents in my new flat, but that, frankly, is a trifle when you think of the Isabelle and Oscar story, like a real-life twist on “Pretty Woman” but with a Javier Bardem-like figure in the lead role.

I saw Isabelle the other day and, much as I hate to lapse into cliché, she was glowing. For Oscar, she can do no wrong, and that she’s slept with men for a living means minus nothing.

True love, how I love it.

I now return us all to regularly scheduled programming, but don’t even try to wipe the grin off my face.