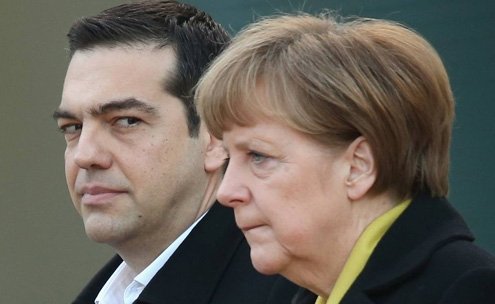 t was extenuating, bitter and contentious, but the European Union has finally imposed some sort of ultimatum on Greece. The deal was dictated by Germany with the staunch support of several Northern European countries. In theory it provides Greece with some breathing room to endure its economic and financial crisis a while longer. But Greece’s gigantic debt problem has only been postponed.

The issues plaguing the euro have not been resolved: the negotiators seemed mostly interested in grandstanding, putting their disagreements ahead of resolving them. The Greeks appealed to their lenders from a position of extreme weakness, but they seemed to have gained substantial backing from European public opinion. The Germans took on the role of severe negotiators, insisting on the moral and practical necessity of repayment.

Of course Greece has had serious financial problems before. The country has gone bankrupt several times, beginning in 1821, only months after it gained provisional independence from the Ottoman Empire. Nor was it the first time Greece had said OXI — “no” — to external pressure. In each case, it pulled through only after painful financial crises, devaluations and hyperinflation. Joining the EU and the euro meant was means to acquire protection and stability, which explains the country’s attachment to the European currency.

As for the deal, the International Monetary Fund, one of the members of the so-called Troika handling the question of the Greek debt (EC, IMF and the European Central Bank), swiftly announced that Greece would never be in a position to repay its €290 billion international debt and that restructuring and partial cancellation were an absolute necessity. While Greece obtained a reprieve and funds to finance its future growth and recapitalize its moribund banking system, most observers seem to agree with the IMF that within a relatively short time, perhaps two years, the country would have to renegotiate a further bail-out.

But the impact of the agreement has wider repercussions. As economist Paul Krugman has observed, long-term divisions within the EU will have far reaching consequences. Germany handled its role as the lead negotiator in bullying fashion, in a reminder of its aggressive past that left the other euro members aghast. That France’s president François Hollande and Italy’s Prime Minister Matteo Renzi pushed unsuccessfully for a different, less punitive deal suggests that a rift has opened between their countries and Germany.

The Germans themselves appeared divided, the main and most visible role taken by Finance Minister Wolfgang Schaubel, acting as the mouthpiece of German hardliners in order to knock Chancellor Angela Merkel down a few pegs and to present himself as a possible successor.

One lesson from the affair is that the Germans are not ready to assume the hegemonic role in Europe they consider theirs. Their brutality in negotiations and unwillingness to compromise reminded many of Germany’s 20th-century militaristic interventions. They also suggested a lack of diplomatic skills, long term vision and empathy. This in turn could easily create an anti-German backlash throughout the rest of EU. Germany’s moralistic and hectoring approach seemed inappropriate at best, especially in times of ongoing economic recession.

And it seemed to have political motives alongside the financial one. Germany and some of its allies appeared determined to destroy Greek Prime Minister Alexei Tsipras and his government of “neo-Stalinists,” in other words Marxists and left wing militants, which critics portrayed as dangerous and disruptive and which East Europeans states considered an “enemy” to be defeated.

The matter revived deep and longstanding European division and had the power to reopen dormant disputes. This divide could become more pronounced if Spain’s Podemos, which won some 40 percent of the vote in recent regional elections and is very similar to Greece’s Syriza, were to become Spain’s leading party after elections this fall. Such an event would sharply change Spain’s role in European politics. There’s even a chance something similar may happen in Portugal, and perhaps one day in Italy. Fearing an enlargement of systematic opposition to European austerity, EU negotiators dealing with Greece made no effort to hide their profound personal and ideological disdain for Syriza and its negotiators. Their scorn helped generate unmanageable tensions.

The expansion of EU far-left parties will put new demands and strains on center-left coalitions that have been the mainstay of European politics in recent decades. And Germany’s choice to ally with former Eastern bloc EU members will thoroughly complicate its role, introducing issues that have not traditionally been handled directly by European countries, such as relations with Russia, the “enemy” for the Baltic countries. Policy on the unsettled and dangerously worrying situation in North Africa and the Middle East, of more direct concern of the Southern Europeans, may also fall victim to new rifts in Europe.

The difficulties a divisive EU had in dealing with Greece stood in sharp contrast to the recently concluded and successful negotiations on Iran’s nuclear future. President Barack Obama has been able to resolve long standing disputes both in Latin America (Cuba) and the Middle East (Iran), issues complicated by the involvement of other major powers including Russia and China.

These two key agreements may help, in time, to normalize and stabilize the two regions. In the case of Latin America, the Cuban deal puts relations between the U.S. and its Latin neighbors on a more equitable and more respectful footing, something South American countries had long sought. The geopolitical issues in the Middle East are more complex. Lifting sanctions on Iran may defuse tensions and reopen trade but it will need a long time before lasting results can be seen. To a certain extent, the stabilization of relations with Iran and possibly with Russia and China are also indirectly linked to the Greek question.

The U.S. will now be in a position to exert stronger pressures on the EU, where it has an interest in maintaining the Union as a viable institution and in controlling centrifugal tendencies. And it has even more reason to want to solidify the euro as a means to avoid global economic uncertainty.