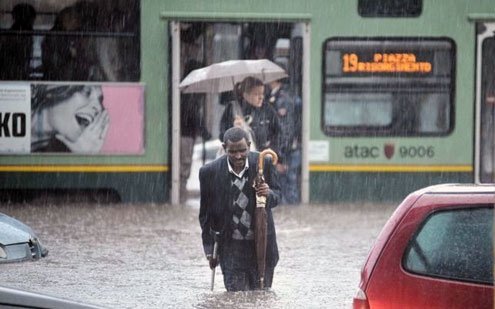 What you don't know can still delay you.
M

y favorite Italian word, or word combination, is newbie frage. I know, you’ve never heard of it. I hadn’t either until an ominous day in September when I was in Milan and had to get to Turin for a conference.

I had booked a flight, even though the distance between the two cities is small — an hour by train. But my company at the time said, “Always fly. Italians respect businessmen who fly.” Which I assume meant that if you arrived at the station no one would show up, or if they did, that someone would spit at the ground in front of you and leave.

Moral of the story, I went to the airport, called Linus, which is how it sounded to me (it sounds more like Linate to Italians, but what exactly is a “linate”?) When I got there — midday on a Wednesday — I checked in and went through the usual security routine (a pretty female sergeant poked around my attaché case, repeating the word, “what?” and then adding the word “go,” failing to explain either. So I went).

Then I got to the gate, where two men were busily chatting on phones and then to each other, and finally pointing at the sky. One seemed agitated and started pacing around in a circle around the other, who remained seated and glued to his phone, barking out what I assume was the equivalent of “what?” and “go,” which seemed popular at Linate.

Finally, about the time we were scheduled to make a move, a garbled voice came over a garbled intercom and announced something like a delay. To me, the word itself sounded like Syracuse, but since we weren’t going to Syracuse — or I hoped not — I decided to let it go (turns out the voice was saying ci scusiamo per la lunga attesa, which means, “You should have taken the train, stupid.”)

Thirty minutes followed with a lot of nothing. The two men kept up their drill, one circling, the other shouting into the phone. One finally looked at the other and said, “Catso. Newbie Frage!”

At the time, before my Italian became under-fluent (think underdeveloped nation), I was prone to moods of transliteration, which some might compare to verbal psychosis. What, I wondered, did cats, or ketchup, have to do with Turin, and why might the newbie frage being delaying us.

So I went up to the barking man and asked. I said, in English, what is happened. He replied: “Bad moment is newbie frage!” He then looked back up at the circler and repeated Cat-so. I smiled and walked away, sitting by myself near a man with a newspaper.

When I asked him the same question, he politely gave me the same answer, “Newbie frage,” and shrugged.

This was before cats and dogs and ketchup were all online, so I really couldn’t do the Google dance. I decided to mimic the circling guy and circled around the waiting area. For an hour.

We did board in the end, and the pilot clarified everything, at least to those up to the clarification: “Syracuse! Newbie frage! Syracuse!” (This is what quarterbacks usually say in the fourth quarter, not the pilots of small planes headed from Milan to Turin.)

It was pouring and thundering in Turin. I got soaked waiting for a cab, since the guy who was supposed to meet me never showed, probably headed for the train station to spit at me. I did ask the cab driver what all the fuss was about and he nodded knowingly. “Bad,” he said in English, and I was thrilled. I got that much. “Bad newbie frage.”

Yes, later, I figured out that a newbie frage was a thunderstorm, and even learned how to take the train without being spit at, but I’m still nostalgic for the days when I nearly went from Milan to Syracuse without even knowing why. Cat-so!