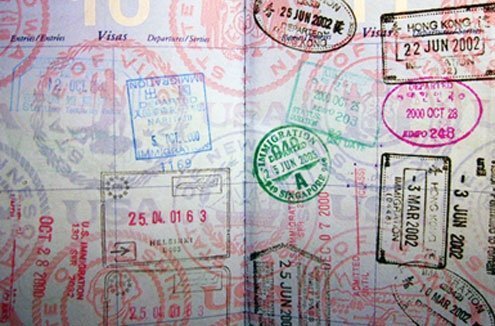 Go ahead, check my passport...
T

he time has come. It’s time to confess my history of childhood abuse. I’ve kept quiet for too long. As my wife says (and she’s been very supportive, “Go for it, idiot.”)

The abuse began at age six and lasted for more than a decade.

“We’re going to Buenos Aires,” my father said. And we went. Not only that, we stayed a week. After that we went to Bogotá and Lima.

Now then, did I have a choice in the matter? Not at all!

From that moment on, many times a year during school holidays, my father took me traveling. We went to (look away if it hurts too much) Hong Kong, Bangkok, Singapore, Seattle, Paris, Geneva — and, worse still, not even in that order. Often I was even sure where he was taking me. We even went to a place he called the Middle East, which probably doesn’t even exist. “Trust me,” he said, “I’m your father.” Right.

Year after year the suffering went on. Here I was, an impressionable boy really eager to play with friends and basically hang out, being forced to travel to all these places, which my father billed as “exotic” (obviously to cover over the abusive behavior).

Once, we went to Taipei and I wanted scrambled eggs in the morning but the hotel didn’t have any and my father told me to respect other cultures and different foods. This was deeply scarring. I remember it like yesterday, wanting the eggs but not getting them. This (says my shrink) is a perfect example of paternal abuse or abuse of power, or both.

And it wasn’t just Taipei. Elsewhere I wanted a sundae and they didn’t serve ice cream. This, too, was an extremely harmful experience that still affects me in my day-to-day life. When I think of ice cream I always think, “Ouch.” I crave ice cream in places that don’t serve it (like sushi bars). Again, this was hugely unfair and manipulative behavior by my father. It made me aware I couldn’t get what I want. No child should ever have to endure that.

Worse, he sometimes fondled me, usually from behind. This happened when I didn’t want to get in planes because I was afraid of flying (at first) and he would (reader beware) actually place his hands on my shoulders to guide me to jet-way.

Did I want his hand on my shoulders? Of course not! Also, he never took me to the cockpit when I asked to go, telling me the pilots were “busy.” Right.

This was one of many lies I had to hear between ages six and 16.

Another was, “Eat your food. You need sustenance.” (Sustenance? Suspicious and abusive word, if you ask me.)

Not to mention, “To go there you’ll need a shot.” A shot? A needle? Hurtful. Cruel. Mean.

Finally came, “One day you’ll grow up to be an adult and you’ll have to deal with taking care of yourself.”

What child needs to hear that? Plus, it was a lie. I never grew up and I don’t take care of myself — just ask my wife.

So, if you’ve been abused in the past — and you may not know it — come forward. Tell your story. Get past the hurt and check your passport or any other old documents you have handy. You never know. Maybe your mother once took you to Finland or Denver on your birthday when you really had something else in mind.

Go for it, idiot.