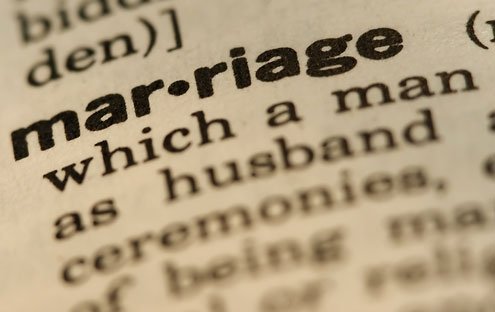 From Mary-Jane to a Mrs. can make a man think twice.
M

y wife says she’s changing her name. Twelve years after our marriage she’ll be going by Mrs. Joel N. Stein. Until now she’s been Mary-Jane Reeves, what I call her “pre-me” name. On our second date she said, “If we ever get married I’m still going to be Mary-Jane Reeves.” I was sipping a mocha milkshake at the time. Since I hadn’t geared up to contemplate the ins and outs of marriage over mocha milkshakes — especially on a second date — I, well, gagged. It took a while before the third date. I made amends by proposing a year later.

The married Mary-Jane Reeves behaved more or less like Mary-Jane Reeves except that she was my wife, which meant we traveled together and even shared toothbrushes but not a pillow. She informed me that nowhere in the married Mary-Jane Reeves clauses did it specifically state she had to stare a pillow with the undersigned, Joel Stein, her lawfully anointed (or is it appointed?) husband. That part was fine since we have different tastes in pillows (and she makes face-down grooves).

Anyway, Mary-Jane Reeves went just about being herself for a long time. She did piggyback on my health insurance plan for a while but didn’t like the dental so she reverted back to her Mary-Jane Reeves coverage because, she said, it had a more human approach to teeth and oral and visual hygiene (eyes need scrubbing, too.)

I never referred to my wife as Mrs. Stein, since my bad diction made it sounded like Frankenstein. Whenever anyone said, “And you must be Mrs.”, she’d jump in and wiggle her palm (sometimes scaring people) and say, “No, no, no, I’m just Mary-Jane!” But lately, no, wait, not lately but recently (is there a difference?) she started saying things like, “I’m not sure about my name,” which the first time made me think she wanted a divorce until I remembered she was still Mary-Jane Reeves and as Mary-Jane Reeves she couldn’t really divorce herself, let alone me, Joel Stein. This was sort of comforting until she added “I’ve been playing the name game too long and I’m tired of it,” which made me think she’d was ditching Mary-Jane. I hoped she’d go for Rita, the name of my first girlfriend who had red hair and married a man named Arnold.

Then, later (or, if you prefer, recently), Mary-Jane Reeves said, “Okay, that’s it, I’ve decided. I’m going over to your side.”

Not wanting to tell her I had no idea what she was talking about, I offered to give her a prize, and smiled, which offended her and she said, “Do you have to be condescending about it?”

I said I wasn’t since I didn’t know I had a side (except maybe a right and left one).

That’s when she said, “I’m now going to officially go by our one married name,” a scary thought the way it came out, particularly if she’d decided to change her name to Joel.

Twelve years of being her very own Mary-Jane Reeves, not to mention the 30 years before that, she explained, was enough. She’d decided to slum it and see what happened. “Call it an experiment,” she told me.

Sure enough, she’s already changed her email to something along Stein lines and even answers her office phone, “Mrs. Stein,” which the first time I didn’t recognize and hung up.

But there is one question I’ve been meaning to ask her, so I’m going to do it here: where’d she get the N? There’s no N in my name and no N in hers (unless it’s a special silent N). So, who exactly is Mrs. Joel N. Stein? That’s what I want my wife to answer, and if she won’t do it, then maybe I’ll have to turn to Mary-Jane Reeves.

My only worry, since she’s a lawyer, is that I’ll get fine print on a platter.