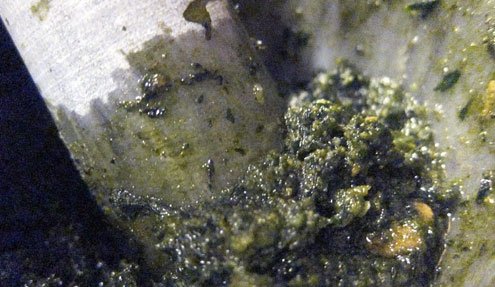 iving with a nut allergy, I never missed Nutella. The peanut butter-like chocolate hazelnut spread is found everywhere from the insides of steaming hot cornetti (croissants) to cake recipes, chocolates, and the fingertips and lips of greedy children and adults alike.

Italian recipes are so simple and genuine that I rarely found hidden dustings of walnut flour or almond shavings that so commonly lace recipes in the United States — an attempt at gourmet complexity that thrives less on taste than on the raves it gets from food writers and emphatic restaurant servers.

In Italy, nuts were mostly in full view, and after eight years I developed a mental database of what went into specific recipes. I rarely had to mention my allergy to the chef, and even more rarely ended up with the unpleasant surprise of a swollen throat and a rush to the emergency room.

This brings me to pine nut-dependent pesto. Pesto is about as common in the United States as it is in Italy. While quality and proportions vary considerably, it’s a dish Americans have managed to master.

The site and scent of a well-executed green and steaming plate of pasta al pesto is intoxicating. The aroma turns savory and sweet circles around itself, with rich nutty traces that entice a bit like the aroma of oven-baked bread. It makes you salivate, and the flavor somehow materializes before you even take a bite.

My father, a doctor, was always wise to my severe nut allergy. What he wasn’t was an expert in Italian cuisine. My parents were quite cosmopolitan in the kitchen, but with an Asian and Middle-Eastern slant. The closest we ever came to authentic Italian cooking was spaghetti with a meat sauce, thick with bell peppers, mushrooms and that “Italian” sausage bursting with caraway seeds that I never actually tasted in Italy. It should have been a pizza topping. At Dominos.

I’ll always remember the first (and ultimately the last) time I had pasta al pesto Genovese. The upscale Chicago restaurant on the top floor of a Michigan Avenue mall was decorated in typical rustic Italian style — checked table clothes, wine barrels, prosciutto and clusters of dried peperoncino hung from the ceiling, opera played on the stereo. I smelled it before it appeared on the table next to me. A heaping portion of spaghetti arrived and we all whipped our heads in its direction and asked our server what it was.

“It’s pasta al pesto, a basil and garlic sauce,” he responded. And that was that. Not one mention of the ground pine nuts that are integral to the Ligurian recipe. I was 15, and overweight for good reason. I was well aware of my dietary restrictions, and always took care to ask about desserts or dishes that might contain the dreaded tree nuts. But when I knew the coast was clear, I would eat for a small army.

My plate arrived I plunged my fork inside. The flavor was everything it promised to be. There was something full, warm, and toasty about this seemingly simple basil sauce, which I now understand as “nutty.” It’s the complex buttery flavor that you’ll find in the aftertaste of arugula, grains and seeds, a lot of cheeses, and wafting above an elegantly oaked white wine.

But the nutty flavor comes first and foremost from nuts, and within minutes my tongue and throat had that telltale tingle, and my lips were double their normal size. I spent the rest of the afternoon getting sick in stores up and down the Magnificent Mile. I’ll never forget the bathrooms at Nike Town. Every stall featured a glass-encased sneaker, and I recognized my Tailwind II series runners right before I lost the last of my lunch.

As I grew, pesto continued to haunt me. I knew I couldn’t eat it, but I yearned for it. Even the prepared pesto in the Italian supermarket produced an instantly attractive meal. I suffered through roommate after roommate who would inevitably come home one rainy night, boil some fresh pasta, stir in the pesto, pour a glass of wine… a gorgeous meal in minutes, and the smell of fresh basil and that characteristic nuttiness would permeate our house.

Not only did I long to eat it, but I wanted to make it. Grinding the ingredients with a pestle and watching the individual parts meld into one sumptuous sauce, and knowing you were a part of it, embodies the organic quality of Italian cooking that makes it so genuine.

I don’t know why it never occurred to me before, but sunflower seeds are a near perfect substitute for pine nuts. I’ll never know exactly what the latter tastes like, but when I set out to make a pesto that wouldn’t trigger anaphylactic shock, the result was as satisfying as I imagined possible.

It was also far more labor intensive. Leaves do not turn easily to liquid, nor do nuts and seeds. Adding oil along the way helps lubricate everything, although traditional recipes call for the addition of the oil at the end. The procedure is a sacred layering of flavors one by one.

I also lightly toasted the sunflower seeds, which not only enhanced their nutty quality, but made them much easier to crush.

The recipe yields a little less than a cup of pesto that can be used anywhere, but it’s best enjoyed the way it was intended, with pasta. Add a heaping tablespoon per plate of fresh pasta, stir, and drizzle with olive oil.

Serve with a dry and fragrant Ligurian white wine such as Cinque Terre DOC or Colli di Luni Vermentino DOC.