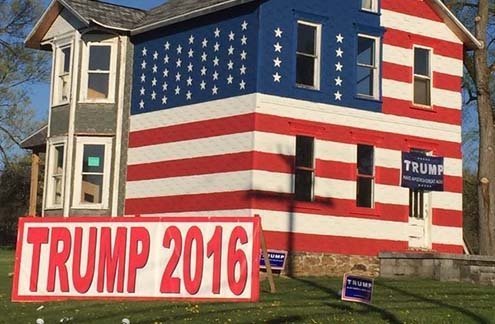 Some in Pennsylvania called it just right, and never had a doubt.
I

n June I visited the city of New Castle in Western Pennsylvania, a place I’ve come to know over the years. Newcastle sits in a beautiful rural landscape of farms and pastures northwest of Pittsburgh with the Appalachian Mountains in the far distance. Though once a bustling factory city, New Castle’s economy has all but collapsed in recent decades.

Most industries have left, and even the town’s famous Shenango China company — which once produced china for the White House — shut down in 1980. The only remaining employment opportunities are in the strings of big-box shopping centers that stretch from Pennsylvania into nearby Ohio: Walmart, Kmart and Giant Eagle, and in health care facilities that cater to an aging population. Subsistence activities include hunting and part time farming, much of it driven by the large Amish population whose farms are scattered over the landscape. The Amish also sell crafts, quilts, dolls and wooden furniture to tourists. Wages are low, often less than $10 an hour and debt is high. Also high is the anger and resentment of the locals, many of whose children have left.

I’ve come to love this decaying city and admire the grit and tenacity of its inhabitants. I’m fond of its old buildings and especially the huge Masonic Lodge known as the Scottish Rite Cathedral and built in the 1920s on the hill above town. Pockets of relative prosperity break up the poverty, descendants of the once thriving middle class.

While in New Castle, I had dinner with two old friends, former journalists from the New Castle News, the local paper. It once sold some 30,000 copies daily, a number that’s since dropped by two-thirds. We spoke about the coming U.S. presidential elections. I’d seen many “Vote Trump” signs on local lawns and in New Wilmington, the still prosperous town nearby. I was curious to understand why. Coming from Europe it was difficult for me to fully comprehend the seriousness of Trump’s candidacy. “Make no mistake,” said my friends, “he’s going to win the election. People are angry and desperate, and not only here, but throughout the Midwest.

The message was clear but I failed to understand it.

A few days later, staying in a relatively luxurious hotel near Pittsburgh, I saw a large and well to do crowd of golf enthusiasts getting ready for the U.S. Open being played nearby. They, too, were all devoted Trump supporters. In my mind what I’d seen and heard made no sense.

A few days later, I found myself in an entirely different setting, this time in the town of Wellfleet on Cape Cod. I met several members of my American family — my wife is American — and they were all strong supporters of Bernie Sanders. They expressed strong dislike for Hillary Clinton, by then the official Democratic candidate. Too slick and conservative, they said.

After that I traveled to New York City, and met several old friends who assured me they had no doubt Clinton would be the next U.S. president. The even tossed out names of future cabinet members. When I returned to Italy, I was certain that the election was set and that Barack Obama, the first black president, would be followed by Hillary Clinton, the first woman president.

I forgot all about what I’d heard in New Castle. That was a mistake, as we now know. The names Clinton and Obama are hardly mentioned these days.

In Lawrence county, Pa., where New Castle is located, Trump got some 62 percent of the vote to Clinton’s 34. In Cape Cod and Manhattan Clinton pulled down between 75 and 80 percent in what amount to a pyhriic victory.

In a way, a new country was busy being born. The Plains states, ranging from Michigan to Louisiana including. Appalachia and stretching west to the Rockies, voted solidly for Trump. The red blot on the map was big and strong.

Clinton won the popular vote, possibly by more than a million votes, but the presidency doesn’t depend on that tally.

But aside from the numbers, something fundamental has changed. The election campaign was poisonous and short on policy proposals. Clinton promised to take into account the programs advocated by Sanders and to continue those of her mentor Obama. Trump spoke of expelling illegal immigrants (some two or three million of them), building walls across the border with Mexico, cutting taxes, re-launching the economy, and imposing an as-yet undefined foreign policy heavy on semi-isolation. All these pledges were vague. They were based on falsehoods and driven by the personalities who spoke them. Few had any grounding in fact.

As Hannah Arendt once said, “The ideal world of the totalitarian kingdom is not that of the convinced Nazi or the convinced communist but rather that of the man for whom distinctions between facts and fiction do not exist any more.” Her words sadly describe what happened in the 2016 presidential race. The Oxford Dictionary just added a newly coined term “post truth” to describe the phenomenon.

President-elect Donald Trump now sits in the Trump Tower in Manhattan, drawing up his future administration with the transition team headed by his son-in-law Jared Kushner, another real estate tycoon. Kushner also owns 666 Fifth Avenue, where I spent several years of my working life. Legend had it that the building was haunted, since the number 666 is tantamount to the devil’s address. The building saw a long list of strange incidents: fires, mechanical failures, people getting hurt in bizarre ways. It was an ominous and superstitious place.

Trump’s America increasingly resembles Europe, where right wing and populist forces advocating policies similar to his are gaining momentum. This “march of folly” – I borrow from historian Barbara Tuchman – may only be just beginning. The Brexit referendum is proof. A new world is being born but for now it remains shapeless, formless, a ball of confusion and contradiction.

In the U.S., Trump’s victory has been scathingly denounced by opinion makers in the mainstream East Coast press. Sanders, the man who might have been a better rival to Trump, has more pragmatically spoken about the need to rethink policies and reorganize opposition to Trump.

Whatever happens now, the best comment of all may have come from the satirists at The Onion, who produced the headling: “FBI uncovers Al Qaeda plot to just sit back and enjoy the collapse of the United States.”