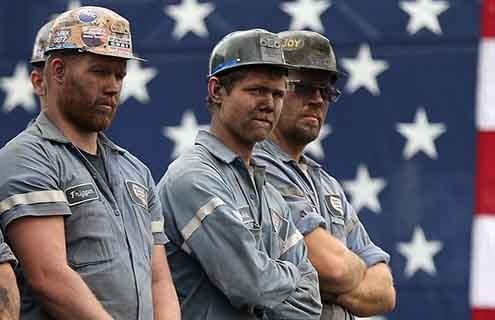 Nostalgia alone won't bring back the coal industry.
I

often sit by my kitchen window in the early morning. On a bright day the light of the sun and the shape of the glass window combine to create a strange mirage: the image of the World Trade Center’s Twin Towers soaring over the Gianicolo in Rome.

It’s an eerie sensation but the two towers appear very distinctly and dominate the Roman landscape from a great distance. As the sun rises further they fade way and by 9 a.m. they’ve disappeared, like ghosts.

Something similar seems to be happening in real life. Governments still seem to look at irreversibly changed situations hoping to restore an economic system that has become a mirage of a ghost long dead. The most illustrious example of mirage-gazing is President Donald Trump’s promise to restore two of the 19th- and 20th-century mainstays of the American economy: coal mining and steel. Both industries have declined sharply in the last half-century along with other traditional staples of the U.S. economy, including the auto industry, big oil, mechanical engineering, and chemical production. A quick comparison of Fortune magazine’s yearly list of the 500 major corporations in the 1970s and now portrays the depth of the structural changes underway in the American economy.

The numbers indicate that the U.S. economy is rapidly moving away from industrial production to distribution services — merchandizing — and high tech. Real estate is marginally shrinking, at least in relative terms.

The American government isn’t the only one chasing the past. Industrialized Europe and Asia have so far been unable to adjust to the semi-stagnation in their economies and introduce more forward thinking policies. The thinking ranges from the pathetic hopefulness of Britain’s go-it-alone Teresa May, to the sternly moralistic budget deficit obsession of Germany, to the Japan’s desire to recover its lost primacy through huge public works programs intended to assist traditional industries. Japan’s economic growth shriveled at the end of the 1980s. It now faces increased competition from South Korea and China. Big project spending is unlikely end the stagnation.

Europe’s mini-recovery is most likely the result of a broad drop in commodity prices. This, and not the contradictory and confusing economic policies of European governments or the European Commission, has produced a significant rise (relatively speaking) in disposable income, as well induced a greater demand for goods and services. The European economy is now expected to grow by more than two percent this year, but as in the U.S. and Japan, it is a fragile recovery that could be easily reversed by speculative moves or by military conflicts in Asia and the Middle East, not to mention natural disaster. Hurricane Harvey will be expensive to repair.

What’s striking is how few institutional economists (OECD, IMF World Bank, and so on) have managed to grasp the essence of the industrial world’s systemic economic stagnation. Instead, they grope backwards. Trump’s desire to bring jobs back to the U.S. remind one of the legend, probably apocryphal, of old King Canute, the North Sea monarch who believed that controlling natural events, such as tides, was part of his royal prerogative. He had to be rescued from drowning when the tides failed to heed his royal command. Something similar seems to be going on among even the most sophisticated of experts.

During the Great Depression of the 1930s the initial ineptitude of governments and their economic advisers quickly became obvious. In Britain, the government did little or nothing. It finally raised interest rates and taxes, eventually opting for an Imperial Preference system (favoring British Empire goods) hoping to re-launch the economy. British Conservatives sought to restore the primacy of traditional staples industries such as cotton and coal. Asian cotton and textile producers undermined the first ambition, the rapid rise of the oil industry the second. Ultimately, something experts had neither foreseen nor planner for, a sharp increase in public demand for cars and home consumer goods, rescued the British economy.

What we’re witnessing today is similar. Vertically integrated industries, such as the traditional auto industry, are dead men walking. Car manufactures have been transformed into designers and assemblers of parts. These industries now rely on outside supplies for actual production. This ongoing evolution can already be observed in some European countries where high-tech suppliers of parts are gradually replacing total, in-house car production. Large-scale manufacturing could be headed for major decline at all levels, with specialized firms called upon to produce consumer goods. New ways of shopping may phase out suburban shopping malls. Paradoxically, and radically, the demand for better health care may bring savings.

These are intimations of a brave new world that differs sharply from the one that appears in the morning mirages of conservatives in the U.S. and Britain. In those, coal miners descend into their shafts and steel girders prevail over software. But not even the most sincere wishful thinking can bring 1950 back to life.

— This is the author’s final column.