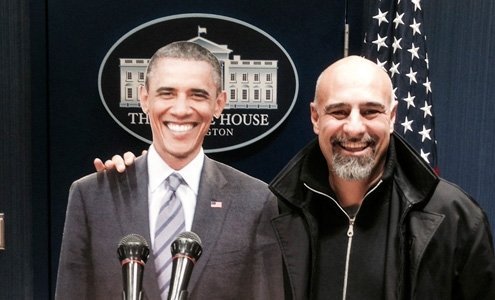 Contrived reality sometimes comes close to the spirit of the truth.
L

ife has moments when you have to make decisions on impulse. It’s like the movie “Sliding Doors” — do you or don’t you make a dash for closing subway doors? Until one November night in Rome I’d faced my own fair share of subway doors and almost always picked the wrong one. Until the Rome crossroads, which came in the form of a cell phone call. Answering it has made me a happy husband and father living in a half-American house.

The callers were Gianni and Graziella, my Roman uncle and aunt. They wanted me over for dinner. Another Aunt, Giorgina, who’d moved to Virginia when she was young, would be there with a Maryland couple and their daughter. Gianni and Graziella had met the daughter the year before in Rome, and later stayed with all of them at their seaside home in Ocean City, Md. One invitation led to another, and my relatives had asked the Maryland family to visit Rome.

The phone call went more or less like this:

“Ciao Marco. You remember those amazing Americans we told you about? Well, they’re all coming over for dinner. You speak English well. Join us.”

Note: At that juncture I spoke toddler English. My sentences consisted of three words and I couldn’t understand more than two at a time. Plus, I’d had already had a date with a hot girl from my gym.

This was my “to be or not to be” moment. Should I go out with the Spandex-hot girl or dine with my relatives? Sliding doors. I picked my relatives. Spandex could wait.

I went my aunt and uncle’s house early, hoping to practice English with Aunt Giorgina. But speaking English meant cutting out Gianni and Graziella. No luck. Aunt Giorgina is a classic organizer who won’t take “no” for an answer. She’d already worked out the dinner seating arrangement, putting me next to “the daughter.”

The family arrived late after a classic Rome taxi experience (the driver who takes the scenic route). I met the mother, Kathleen, and her husband Mike, a lovely smiling couple that said something about me in English and laughed (if only I knew what).

Then the daughter appeared — she’d actually been there the whole time. We exchanged greetings, sat down, and dug into Graziella’s feast. Gianni and Mike started trading jokes, one in Italian, and the other in English. Jokes must have a universal language since everyone was laughing.

I tried making conversation with the daughter, but my kindergarten English didn’t help. She looked somewhere between dumbstruck and amazed.

Naturally, Aunt Giorgina had carefully plotted out the final act. Mike and Kathleen would take a cab back to their hotel while I was expected to scooter the daughter (and soon-to-be love of my life) around Rome. This was November, remember: It was raining.

But the daughter understood Giorgina was not taking “no” for an answer. She agreed to the scooter (another sliding door). I gave her a windbreaker that covered her tip to toe. By the time we left, the rain had abated and it wasn’t that cold. I think even aliens would fall in love if stuck on the same scooter with Rome as a backdrop.

I drove past the Coliseum and stopped under city hall, at which point I said (by then my English was fluent): “This is the Capital Hill. I am married here.”

She said nothing, until: “You are married?”

“Yesterday you got divorced?”

The look on her face changed many times during that exchange. But by the time we sorted out the definitive translation, that I was single, she was smiling.

In fact, I’d filed for separation only a day earlier. It took 24-hours before I plunged into my new and life-changing love story.

In the end, I dropped her off at her hotel on the Spanish Steps and asked if I could see her again during her trip — or tried to (given the look on her face I’m not really sure what came out).

We shook hands and did the ritual cheek-to-cheek kiss, which soon involved more than cheeks.

Moral of the story: The kisses haven’t really stopped for more than a decade — kisses with a side order of two kids and a 30-year mortgage.

The official family language is English, especially when we argue (that way I get to win in two languages). My wife has been my best, toughest (and most expensive) English class. Thanks to her I’m nearly fluent. I can now say it officially: I’m half-American.

• Both husband and wife have learned to love wine over the years, and Rome’s brutal summer days are all about find a refreshing, top-notch white. A recent trip to La Maremma (the coastal-leaning part of Tuscany) took me to the Monteverro vineyard, located under the foothills that host the medieval town of Capalbioa.

Though coiffed by Mediterranean breezes, southern Tuscany land is tough to plow. But do it right and you can get spectacular results. Passionate wine-lovers Julia and Georg Weber dug into this hilly red clay and their hard work has yielded amazing results.

Monteverro Chardonnay IGT Toscana Bianco 2011 (100 percent Chardonnay 100;14.5%: € 80) is golden yellow with an extraordinarily complex aroma with chardonnay fruitiness. A hint of pineapple and apricot juices unite in a smell that suggests toasted pastries, bergamot, sweet spices and hazelnut, all of it wrapped up in a floral and citrus-tinted finale. The body is fresh and tasty, with a soft, almost caramel toffee-like finish.

To me, this wine is up with Bourgogne-class equivalents. Have it with shellfish. No sliding doors here: just go for it.