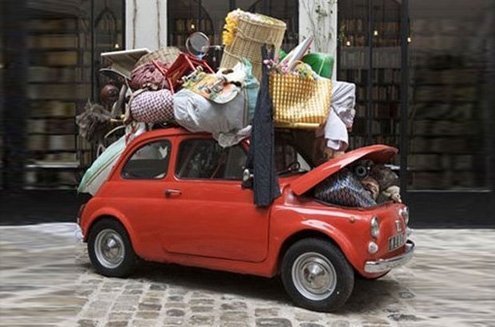 These days, you'd be drawn and quartered, if not jailed, for similar roof loads.
T

hirty-five years ago Italian families got one long vacation a year, in August. That’s the month when the country basically shut down except for the south, which absorbed most of the holiday traffic.

If you remember those John Wayne Westerns when he’d ride alone through over empty plains and tumbleweeds for what seemed like an eternity, that was more or less Rome in August. Before supermarkets, the city had only family groceries most of whose owners bolted for the sea in late July. Good luck finding open shops and restaurants. Even pharmacies closed.

A few days before the start of our August 1980 family vacation, my father issued detailed marching orders. Everyone minus him had an assigned task. His job (he reminded us constantly) was to earn enough to pay for us. I was a lanky, longhaired teenager, and along with my siblings my job was to pack bags and amass what seemed to me like enough food to last for five years on a desert island. But we weren’t headed for a desert island. We were going to Calabria, famous for everything besides not having food and drink.

My father’s only serious concern was getting his fishing gear ready and making sure he poured just the right amount of homemade wine into jugs (“They can’t make wine down there. I’ll bring my own…”).

We’d start loading car late in the afternoon because we wanted to drive at night to avoid traffic. The general idea was to get to Calabria next morning “refreshed” and ready to go. But the real reason for the night driving was heat. We had no air conditioning and doing the Salerno-Reggio Calabria stretch by day was just too brutal.

At “X” hour we mustered in the garage, bags in hand, ready to board. As head of the household and master of the family universe, Papà got preferential treatment, which meant the fishing gear and wine jugs went in first and took up 80 percent of the luggage space (why I don’t get the same master of the universe privileges in my own family decades later eludes me).

Me, my brother, my sister, my mother would stare at our own bags and then at our Opel Kadett sedan and wonder, “What next?” My mother’s suitcase held pasta, cured meat, tomatoes, olive oil and some extra wine (“You never know,” said my father).

That a driver could barely fit didn’t worry my father. In that pre-seat belt, pre-navigator, pre-air conditioning era all that mattered was making sure your stuff was battened down on the roof, like containers strapped to a ship deck. Not knowing just how to handle the whiplash elastic straps (which had j-shaped hooks) made you a candidate for losing an eye.

Once we’d tied down everything possible — that kind of roof pyramid would land you in jail these days — the next step was battle stations. We kids were jammed into the back with whatever hadn’t fit on the roof while mom sat in the passenger seat.

“Okay,” said dad, beginning his official pre-trip announcement. “It worked again this year. Everything fits. So did you. Now, don’t even breathe. Be good. If we dodge traffic we should be there in 10 hours.”

No one had the heart to tell him it was only 4 p.m. and we probably wouldn’t get around to leaving for another seven hours. He was too proud that everything fit.

Even though we weren’t headed for Africa, or Mars, leaving was a solemn occasion. We’d walk to the car surrounded by well-wishers and relatives, some of whom we hadn’t seen for ages, all of them equipped with white handkerchiefs against the tears. “Have fun! Come back soon!” But the important part was “come back.” They all wanted us to call once we got there.

I later understood the ritual call had less to do with knowing how we were than if we were, since some of them had bet money we wouldn’t make it to Calabria alive.

We in the back looked like red guppies. Our mouths moved but nothing came out. Our friends probably thought we were too moved to speak. In fact, we could barely breathe.

Every year we tried leaving before midnight; every year we failed. This nationwide failure meant everyone ended up started out at about the same time. So did the traffic, and the smoking. My parents usually went through a pack before we’d even gotten half a kilometer.

The windows stayed shut because my mother (who wore a woolen shawl) worried about drafts. She still blames her neck problems on the 1980 trip — someone apparently opened the window for 30 seconds, ruining her life.

Heading south we’d sometimes see cousins packed into their Fiat 128s going the same way. The kids in those cars were mostly sobbing. We’d make one non-gas stop in which only the adults were allowed out. It’s not that they wouldn’t let us move but that we couldn’t. Bathroom stops didn’t exist. We had young bladders, said the adults. What was 10 hours for young bladders? Stopping would just upset the overall harmony of the vacation, or so we were told.

We did get there in the end. In fact, we got there every year. Nothing much ever went wrong. But I’d prefer giving up vacations than have to do that kind of trip as an adult (you’d understand if you knew my family). That was then. We were young and carefree. We mostly cared about being together and having fun, which can be a challenge for today’s youth.

One thing I do remember fondly is the taste of fresh country mozzarella with dollops of olive oil. It seemed to me perfection on plate at the end of a beach day.

I didn’t know much about wine then, but I do now. And mozzarella makes me think of Bianco di Bellona Irpinia Coda di Volpe DOC 2013 (Tenuta Cavalier Pepe; 13%; €11). It’s a hay-colored wine with golden flourishes and a fresh, fruity aroma that suggests yellow plums, apricots, pineapples, with a hint of flowers and herbs. It’s full-bodied, intense, and sticks with you. It also brings out the best in mozzarella (their coupling has won various awards).

Just writing about the 1980 vacation makes me want to eat mozzarella and pour myself a glass of Bianco di Bellona. Unfortunately, the seaside is nowhere in sight — not yet.