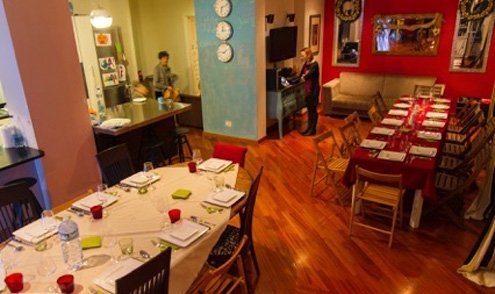 Calm before the Lori storm.
H

oliday season hits the Lori household just as I think I’ve finally managed to work off everything I ate the previous Christmas. Holiday reunions are a staple of central and southern Italy and can include friends, neighbors, passersby and strangers so long as everyone sits down and plays by the rules, which means eating like there’s no tomorrow.

Holiday meal scheming starts in August. (there’s Christmas Eve, Christmas day, lunch on the 26th — polenta, New Year’s Eve and Day, Epiphany). First come logistics: who has a dining room large enough to seat, say, 40 people? Those with a room the size of the Spanish Steps raise your hand.

After that, mothers, aunts and inlaws enter strategic planning mode (buying food in bulk six months ahead is cheaper). Preparation involves top-priority calls and probably a few clandestine meetings at Masonic lodges. Whatsapp groups get names like “We Feed the World,” “Grandmothers to the Rescue,” “The Last Supper,” with the holiday militants scheming menus and decide the order of dishes and desserts, and who does what.

The great thing, though, was that I could eat anything three times over and not gain weight. Now I gain weight just looking at the table. And don’t even try to comprehend the volume of food. Just imagine seeing the Grand Canyon for the first time. Also, there was no real dress code. Some wore jackets, others jeans, a few put on pajamas so they could fall back on the couch.

The only sacrosanct moment was when everyone sat down at the table. Fifty years later I still remember the military clockwork. There was no such thing as getting to the table a minute after noon or 30 seconds after 7:30 p.m. Do that and you risked going foodless or being disowned. My father was on the phone every few hours to check on everyone’s progress. Anyone not present for the opening ceremonies was out of the will.

First out of the kitchen were the antipasti, 15 in all: cheese, fresh vegetables, grilled tidbits, shrimp, crustaceans, hams, olive and local pies. The aunts had a running bet on who could top the amount and quality of the food served at Christmas, the first of feasts. By the time you’d munched on half the antipasti you’d downed a week’s worth of calories, not including wine. Water was around only to rinse your hands and to sip on if you were under age four (prove it!).

Then came pasta. Italy officially has about 130 kinds of pastas. My house had 180. White sauce, red sauce, fish sauce, meat sauce, mushroom and vegetable sauce, the list goes on. Caveat emptor: you had to eat them all — or risk reprisals from the on-duty aunt or grandmother who’d explain the tender love care that went into making it.

By the time main courses rolled around you felt half dead. That’s when you got a fish you were sure was extinct 400 million years ago along with some rare and endangered bird — all God’s creatures at your heavy fork’s beck and call. Saying “I’m full…” could start a war. Your mother would announce that you hadn’t eaten a thing and looked emaciated.

The serving and breakneck eating usually went on non-stop until 9:30, when dessert appeared. So what exactly were you supposed to do after dinner and before the midnight toasts and slices panettone?

Tombola is a kind of Bingo or raffle game where cards and numbers are picked from a pot and you win symbolic sums of money. It’s among the dullest pastimes ever invented.

Some of those gathered didn’t see or hear as well as they did in 1900. You usually had to repeat the number at least 10 times. If one number happened to sound like another your audience went into a panic no terrorist alert could match. Testy participants would storm away because the number 38 had come up twice in two years (a conspiracy). Others hid in corners to avoid in-laws they hadn’t spoken to since Christmas 1975. One grandmother was in the habit of dropping her tombola card and numbers, which meant starting all over again, and again.

Midnight was always a relief. The silliness was set aside and everyone hugged. Mediocre sparkling wine was poured into plastic cups (offending my not-yet-formed master sommelier side).

But times are changing. Old dining rooms won’t hold expanding families. We still have fun, but the grand and raucous home get-together has mostly vanished. I miss the spaghetti with garlic and oil my father and aunts cooked up after the sparkling wine and panettone (since we hadn’t eaten enough, after all.)

In recent years I’ve become the family’s wine guru, no easy task given the menu. These are mostly fish-based meals with intense flavors and spicy sauces.

I’ve decided to surprise the gathering with a local Lazio wine produced just south of Rome. Cantina Sant’Andrea has been putting out fresh and aromatic wines since 1964.

Oppidum Moscato di Terracina DOC Secco 2014 (Moscato 100%; 13%; €8) is gold in a glass. It a fragrant wine, with hints of tropical fruit, acacia honey, yellow rose, lychee, myrtle, rosemary and thyme, all of which bring out the best in seafood. Your mouth feels fresh, clean, and dry, before a long a fruity kicker. It’s a perfect holiday wine you can serve with antipasti, fish crudités or seafood main courses.

Now then, back to some eating — so I don’t look so emaciated.