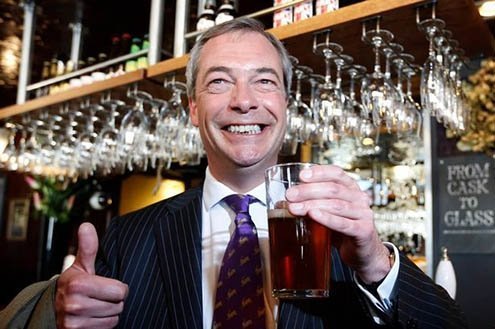 Nigel Farage may not be laughing for long.
B

ritish nationalist Nigel Farage must have imagined leaving the EU as little more than snapping a ring off a beverage can. But wait. There’s a substantial difference between a can bought in a European supermarket and those sold in the U.S. The European ones uniformly require the simple ring while many American counterparts still require a can opener.

The more efficient European method was the result of mandatory safety norms — costly but efficient — introduced by the European Commission. Over the years, ring-top cans have become universal.

Seen through the Brexit lens, the ring-top rule was seen by some as clear and intelligent, by others as an expensive bureaucratic infringement on national can-opening freedoms.

In many respects the cans are a good metaphor for the larger symbolic issue faced by British voters ahead of their June stay-or-leave EU referendum. In the end, they may have found grappling with the issue far more complex than just snapping off a ring.

To everyone’s surprise the “exiters” won, plunging Britain into a multi-layered crisis — Theresa May has already replaced David Cameron as prime minister — whose character is both national and European. The anti-European vote vented long and stubborn British conservative hostility toward the “super non-national government” in Brussels. It also exposed the Labor Party’s own inner fissures. Fearful of losing support in the declining rust belts of the British Midlands, Labor’s pro-European position was lackluster if not ambiguous.

In all, the campaign proved a bitter and confusing trek that also produced a rare event in Britain: the murder by an unbalanced man of a young pro-European Labor MP.

It also cost Cameron his career. Both before and after the vote, British media lambasted him for having led a hapless “stay” campaign. His successor, May, a veteran conservative, has already ensured her cabinet is packed with Brexit supporters. Opposition leader Jeremy Corby, who has come under fierce fire internally, may yet lose his job for his management of Labor’s own ineffective pro-EU campaign.

Despite May’s reassurances, Britain appears in disarray, teetering on the verge of a protracted period of political, social and economic uncertainty. Bitter squabbles are almost certain to erupt, not only between parties but also within them. The larger matter of domestic unity is likely to produce its own set of storms, with Scotland pressing for a new independence referendum and both Northern Ireland and Wales beginning to grumble in a similar way.

For now, only two parties openly stand to gain from the ongoing shock waves: the pro-EU Liberals and Farage’s UKIP, which essentially “won” the vote. If a new vote were held today, it’s exceedingly likely pro-EU forces would win in a landslide. But a second vote is improbable, at least in the short term.

At the moment the upper hand belongs to the “little Englanders” of the provinces. But it’s a weak one. In a way the situation resembles the British crime series “Midsomer Murders,” which features a Thames Valley police inspector who must solve crimes in a prosperous, intensely local community that’s very much detached from London if not the outside world. The veneer of order and wealth papers over greed, envy and moral rot.

Large cities, London in particular, voted overwhelmingly to stay. The same applies to university cities like Oxford and Cambridge (among many). The rift was significant and suggests deeper social fractures may lie ahead.

Since the vote, some British politicians appear to have adopted the position that they have something to gain by slowing down the formalities of the exit process, perhaps gaining to time to allow Britain to create and occupy some kind of free trade zone that would help its commercial position while remaining unencumbered by the obligations of EU membership.

But France, Germany and Italy seem unwilling to allow Britain any special dispensations. They simply have too many problems at home to spend much time indulging Britain’s erratic expectations. In Eastern Europe, meanwhile, domestic pressure is growing in the Czech Republic, Slovakia and Hungary (and to a lesser extent Poland) to hold similar stay-or-leave EU votes.

The Brussels exit game may not be over.

In some ways, Europe has turned back the clock to 1963, but in reverse. That was the year French President Charles De Gaulle vetoed Britain’s entry into the Common Market. But few in Europe are crying over Britain’s choice. A sense of “good riddance” prevails, one that could grow.

At the same time, there’s no shortage of anti- European populist feeling on the continent itself. If that feeling prevails, Europe’s elites could be overhauled. Whether change on the continent is a life raft to which Britain may cling remains an unknown.

What is clear is that the actual mechanics of Britain’s detachment from Europe may prove far more complex and costly than anyone ever dared imagine. What Farage conceived of as a friendly separation has the potential to spiral into an expensive and acrimonious divorce.

Sterling has plunged. The country risks major capital flight, with a recession far from out of the question. Some British-based companies may well try to relocate on the continent, which would create a separate array of troubles.

Another peril is the prospect of a European banking crisis. In that scenario “Britbreak” would replace “Brexit,” with consequences too grave to imagine. The watchword for now should be caution and careful management. Like developing cans with safety lids and ensuring all use them.