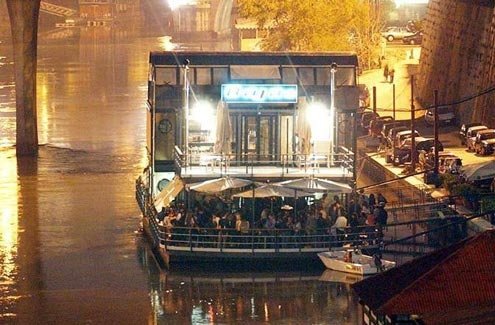 Closed for six years, the Baja restaurant and nightspot reopened in 2012 after an extensive overhall.
W

hen it comes to seasons, Rome runs on its own very precise clock. Every year without fail the city’s residents swap leather jackets for winter coats the day autumn ends. Spring and summer see their own switches, with June ushering in the bathing season. That ends in mid-September when beach and pool trips are set aside (grudgingly) and bikinis are put aside until the next cycle.

Growing up in Rome, where summer temperatures can make it feel like you’re stuck near the earth’s molten core, not the surface, you learn to crave water — and not just seawater. Just getting near it, whether it’s the ocean, a pool, a lake, a river, becomes a goal by itself. Swimming isn’t essential. Being by water seems calming and cooling, at least to me.

This year, my late spring hunt for cool (pun-intended) new places to eat has led me to most of the main bodies of water in or around Rome.

When Romans think of a scappatella (a day-trip getaway), most tend to gravitate toward the coast, aiming for a day on the beach where they’ll eat the freshest seafood and soak up sea breezes. That’s fine, but it leaves out the joys of spending a day by the river or at a lake.

For those who think of the sea alone, here’s a reminder of other destinations on a hot day. Though tourists tend to think of lakes as a northern phenomenon, perhaps helped by the media popularity of George Clooney’s Como villa, Rome has an array of beautiful lakes, many of them water filled craters formed millions of years ago,

North of Rome is Lago Bracciano, a sprawling, popular lake with three quaint shoreline towns, Bracciano, Anguillara and Trevignano – reachable by bus or train (from Roma Ostiense). All three were medieval outposts in defense of papal Rome and each has its own idiosyncrasies (Bracciano boasts the 15th-century Castello Orsini-Odescalchi, residence of the Orsini and Borgia families). All three towns have dining spots near the water’s edge while swimming and sailing are staples on the lake. Near Anguillara is a second, more secluded lake, Martignano, popular because of nearby parkland.

Travel slightly further north, toward Lago di Vico, a crater lake on hilly volcanic ground, and you’ll find the hamlet of Punta del Lago, literally “Tip of the Lake.” While there, be sure to order the typical Acquacotta soup, which featured leftover homemade bread softened in a soup of wild vegetables, potatoes, tomatoes, onion, mint leaves (from the neighboring town of Nepi), and a drizzle of extra virgin olive oil. Legend had it “cooked water” soup was a staple for herdsmen and coal-haulers who had to make do with the basics.

If instead you’re headed south, toward the Colli Albani, or Alban Hills, you’ll find the tiny town of Nemi, which also has a sprawling lake (where Nero once sailed large, barge-like vessels that some archeologists suggest might have been floating mini-palaces). Nemi is famous for its strawberries grown on the ground that was once the crater of an active volcano. Farmers say the says the jagged lava enclaves create a climate in their own right, retaining the sun’s heat and shielding the strawberries from harsh winds. The town is also a popular spot for bridal receptions.

If you’re too lazy for lakes and want to stay home in Rome, don’t forget the much-maligned Tiber. A stroll along Lungotevere reveals a number of docked riverboats. Such boats were much more popular in the 1950s, before Rome nightclub life was fully developed (and well before indoor air conditioning). In fact, one plays key role in a scene in the movie “Roman Holiday.”

To my surprise and joy, I recently discovered that one of the boats has been transformed into a fabulous restaurant and cocktail bar. For a water-lover, this is manna. Plus, I’d never been on riverboat.

The anchored vessel now has floor-to-ceiling picture windows, affording visitors a unique view of the river. The split-level boat also hosts a minimalist-decor restaurant on the lower floor (continental food) and an open cocktail bar upstairs (where nightlife still flourishes).

A few hours on the Baja dispelled any doubts I had about relaxing along the Tiber. Not an original line, I know, but I’ll be back.